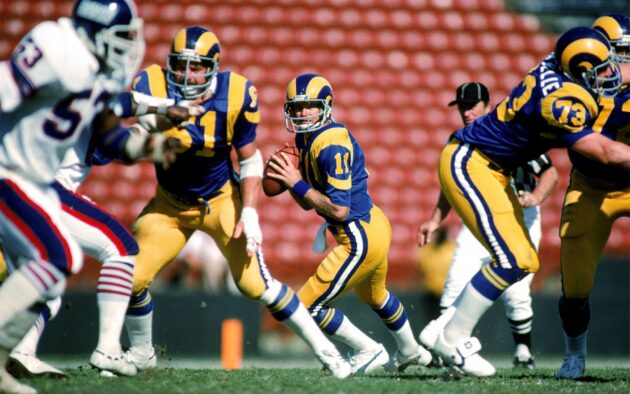 Los Angeles Rams fans have suffered many heart wrenching moments throughout the years. For this fan, my first taste came in 1977 after the infamous “Mud Bowl” playoff game against the hated Minnesota Vikings. Who did I blame? Pat Haden of course!

“His hands were too small,” I would complain. “He couldn’t hold or grip the muddy and wet football with those hands!”

Pat Haden became a Southern Californian favorite when he starred at the University of Southern California and later became a Rhodes Scholar. At USC, he made it to three Rose Bowl appearances and won two National Championships. In the final game of his collegiate career, the 1975 Rose Bowl, he was named co-Most Valuable Player.

Haden was a seventh-round pick in the 1976 NFL Draft selected by the Rams and made the team as the third-string quarterback behind James Harris and Ron Jaworski. It wasn’t long after the season started that Haden was thrust into the starting lineup after injuries to the top two QBs beset the team.

Haden wasn’t spectacular, and didn’t do a bad job conducting the “Ground Chuck” offense that featured Lawrence McCutcheon and John Cappelletti. Harris was able to recover from his injury and Haden returned to the bench, but ownership was not happy with Harris’s production despite the fact he was the leading passer in the NFC at the time.
Haden, a favorite of owner Carroll Rosenbloom, got his opportunity when Rosenbloom forced head coach Chuck Knox to start the rookie. Haden would start seven games in 1976, going 5-1-1.

Haden played for the Rams through the 1981 season winning 35 of 55 games, but no season was better than the 1977 season, when he was selected to the Pro Bowl after leading the team to an 8-2 record after replacing the ineffective and injured Joe Namath. Unfortunately for the Rams, playoff inefficiency is what Haden became notorious for. He started five games from 1976-1978 all against Minnesota and the Dallas Cowboys, going 2-3 for his career. He completed just fewer than 45% of his passes with four TDs and 14 interceptions.

L.A. had enough of the Vikings, travelling to Minnesota, and Fran Tarkenton in the playoffs since 1969, suffering four-straight losses all in Minnesota’s cold weather. Finally, in 1977, the Rams were going to get the Vikings in their own backyard, sunny California. The team had previously beaten the Vikings in L.A. during the regular season, 35-3. In the Monday Night blowout, Haden passed for two touchdowns and ran for another. The Rams’ defense sacked Tarkenton four times and intercepted him twice, both by rookie Pat Thomas.  The Rams were ripe to move past the Vikings once and for all.

So what happens next? The Albert Hammond jinx happens! Hammond helped write and performed the 1972 hit, “It Never Rains in Southern California,” and suddenly three days of torrential rain, and a field with already suspect sod turned into a version of a mud wrestling event at its best.

The Rams were heavily favored to win the game, and the Vikings seemed to relish the fact that bad weather has once again graced their locker room.

This time it wasn’t Tarkenton who was scrambling around taunting the defense, Bob Lee played quarterback, Chuck Foreman had 31 carries for 101 yards, and Haden, who had eight-game winning drives in his career, threw his third and final INT to the Vikings Jeff Wright to seal the 14-7 win for the visitors.

In reality, I was probably too harsh on Haden when I was 16, but these days, I have come to understand football more and have become an even better, “Monday armchair QB.”

Haden was able to lead the Rams to a playoff victory in 1978, a 34-10 win in Los Angeles. It was the first of only two playoff wins against Minnesota, the last coming in 2000.

Haden will always be remembered as the quarterback, who bridged the Rams from their contender years of the 70s into the 80s where they became the just missed teams of the 80s.