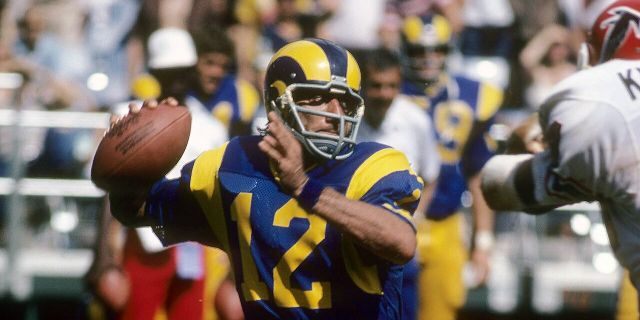 Eight years after a Super Bowl III “guarantee” that thoroughly exasperated Carroll Rosenbloom, the then owner of the Baltimore Colts, Rosenbloom’s Los Angeles Rams made a splash that was felt from Broadway to Hollywood. Though I was a 16-years old and was supposed to be cool, I really became overly excited to have a superstar hero arrive in L.A., no matter what his age was, for a possible chance at a Super Bowl win.

Three-straight years of missing out on a Super Bowl appearance, all with NFC Championship game losses, was enough for the fans and Rosenbloom, who had wished to become the first NFL owner to win the Lombardi Trophy with two different teams. When the New York Jets failed to pick up Namath’s contract and waived him prior to the 1977 season, the Rams swooped in and signed Namath to a long-term contract in an effort to find that missing link. Presumably at the quarterback position and lead the perennial contenders to Super Bowl glory. At age 34, Namath was being looked at to take the tiger by the tail, lead Chuck Knox’s team finally to the Promised Land.

“Broadway Joe” was already a household name, but he yearned to play in warmer weather, where his damaged knees and various beatings in 12 years of football in the cold atmosphere of New York took a toll, not to mention he could become an even bigger star in Hollywood, an icon perhaps.

Suffice it to say, the Rams won the NFC West in 1977, and Namath was able to list this on his accomplishments of that fact.

But, as they say, not all stories have happy Hollywood endings, this was the case for Namath and the Rams. He started just four games against Atlanta Falcons (loss), Philadelphia Eagles (win), San Francisco 49ers (win) and ironically a Monday Night Football loss to the Chicago Bears that effectively put Namath on the bench for the rest of the season. Namath went on to star as a color commentator on MNF telecasts.

“I wish I knew what I learned in making that transition before making it, meaning it turned out to be a very difficult transition,” Namath said in an interview with ESPN earlier this year.

Say what you may about Joe Namath’s career, his time with the Rams, or his acting, but whatever it is, it wasn’t going to faze him as a man. He once said, “I’m always gonna be Joe Namath, and I’m not running from that.”

Namath even to this day is sincere about his time with the Rams and the emotions he continues to feel about his only year in Los Angeles.

“I didn’t play well enough to win. I’m disappointed,” he told ESPN. “When I see myself in that uniform, I remember Chuck Knox. I remember Freddie Dryer. I remember Lawrence McCutcheon. I remember Jackie Slater — guys I played ball with. I remember the guys, the people. I’m just disappointed with the way the season ended.”

It was the best of times hoping Broadway Joe would lead Hollywood’s team to its first Super Bowl victory. It gave every teenager like me the chance to dream.