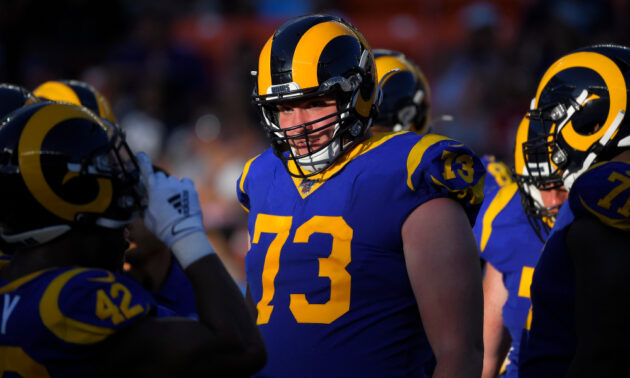 The interior front was a problem for the Los Angeles Rams offense in 2019. Injuries plagued both starting center Brian Allen and starting left guard Joe Noteboom. By substituting, the Rams found a solid replacement for both by moving their right guard Austin Blythe to center and placing Austin Corbett at left guard. Blythe held his own in the middle and David Edwards was put to the fire at right guard.

The Rams added one offensive lineman in the seventh round of the 2020 NFL Draft, Clemson’s Tremayne Anchrum. He has great potential and helped anchor the line for the Tigers. He was a tackle, but most likely will play guard for the Rams. Former Arizona State center Cohl Cabral was picked up in free agency. There is no official word at what position he will play, but he may back up a deep center corps with Allen, Coleman Shelton, Nate Trewyn and Blythe. He may also be able to sub at guard.

The Rams have the benefit of shifting their O-linemen to different roles. They have the skillset to suffice. In the guard group, the Rams are deep in quantity. Noteboom, Corbett and Edwards will be back. The Rams also have Jamil Demby and Jeremiah Kolone. Here is the guard lineup.

Blythe is the most versatile guard in the lineup. Last season, he played at both guard positions and center. Along with Whitworth, Blythe was spared injury on the line during the 2019 season. He played 100% of all offensive snaps in 15 out of 17 games last year. He also only allowed two sacks. The Rams allowed only 22 sacks last season, the fewest in the NFL. In 2018, Blythe played in 100% of all snaps in all games and allowed zero sacks. At 6’3,” 298 pounds, he is the right size for a center, but can be just as easily a backup guard position when needed. Once the Rams finalize their roster, Blythe will have a major role as a leader and example for younger linemen. Look to him to be an anchor in the interior.

Corbett came to the Rams from the Cleveland Browns mid-season in 2019. He is a welcome addition to the line and a stout guard up front. The 6’4,” 306-pound former Nevada center will be in his third year in the league. He filled the left guard role vacated by an injured Noteboom. He strengthened the offensive line between tackle Andrew Whitworth and Blythe (who moved from right guard to center). Corbett joined the Rams in Week 9 last year. He started in 100% of all snaps in the last seven regular season games. He is a potential option as a starter, though it really depends on Noteboom’s performance in camp.

Coming off a season-ending injury, Noteboom will see competition from Corbett and other offensive linemen. He had great potential for the 2019 season and the coaching staff had confidence that he could do the job vacated by veteran Rodger Saffold. Unfortunately, he suffered a knee injury early in the season against the San Francisco 49ers. Up until that point, Noteboom was decent, but still struggled at the position. He played in 100% of all snaps in the first five games. He allowed no sacks. At 6’5,” 321 pounds, the third-year player was originally slated to be Whitworth’s replacement at tackle had he not returned for another season. Since Whitworth is back for possibly three more seasons, Noteboom will likely be back at a guard. He may still cross train at both positions for depth.

Edwards was thrown into the mess at O-line and held his position at right guard well. The 6’6,” 308-pound Wisconsin alum brings a strong presence to the inside. Last year, he played 100% of all snaps in the last ten games of the season. Unfortunately, he had seven penalties (five for holding and two false starts), but he was a good replacement for Blythe who shifted to center. He only allowed one sack last year. Edwards was an option quarterback in high school and a tight end when he first got to Wisconsin. He is another versatile player that will be valued at the line. Expect him to be the first choice at right guard in 2020.

Demby is still slated as a backup guard. He did not impress last season, but still has potential. At 6’5,” 321 pounds, the former Maine offensive tackle looked promising. Demby will be in his third year with the Rams. In 2019, he started and played 100% of all snaps against the Cleveland Browns in Week 3. It was his only start and the most he played in a game all season. He also had two penalties and allowed three sacks last season. He did see playing time against the New Orleans Saints and the 49ers. It is unknown what Demby’s future holds on the roster, but training camp will tell where he will land.

Kolone has not seen the field since joining the Rams. He had been on the practice squad the entire 2019 season. The San Jose State alum is in his third season after an itinerant start to his career having bounced back and forth from the Rams to the Detroit Lions’ practice squad and back to the Rams in less than a year. At 6’3,” 316 pounds, Kolone was a trained guard with the Spartans. It is unknown how the Rams will utilize him or if he will remain with the franchise.

Anchrum will be in his rookie season with the Rams. It is unknown where they will place him. Although, he is a trained tackle, he has played across the line in college. He will most likely be a guard. At Clemson, he anchored the line in two national championships. His versatility is much desired by the Rams coaching staff and his potential is yet to be seen in camp. Look for Anchrum to give the other experienced players some strong competition.

Although the depth chart is not finalized, the most experienced and starting guards from last season will most likely hold the interior again in 2020. The Rams are looking for two things next season: versatility and fundamentals. The guard corps is deep with stiff competition for potential starters. The backup guard competition is equally strong and the Rams hope that will make the line better as a whole this season.