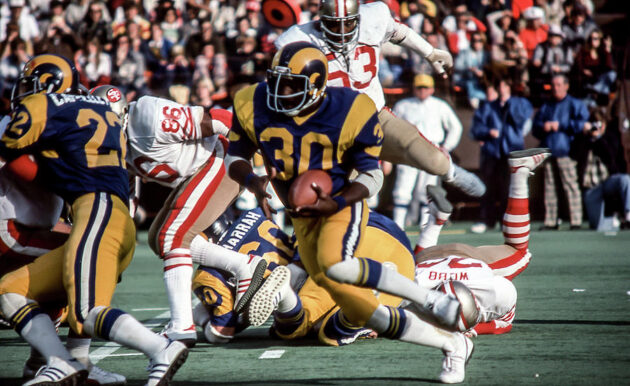 The football fluttered through the Super Bowl XIV atmosphere like a duck wobbling in for a landing. Only one thing was for sure, Vince Ferragamo did not throw the pass! Instead, backup RB Lawrence McCutcheon tossed the pigskin in a “Clutch” situation, which was caught nicely by Ron Smith in the end zone, giving the Los Angeles Rams and their fans a glimmer of hope after giving L.A. a 19-17 lead in the team’s first-ever Super Bowl appearance. This was before more than 103,000 people in Pasadena, against the vaunted and heavily-favored Pittsburgh Steelers.

That’s not who McCutcheon is or was, not by a long shot!

Lawrence “Clutch” McCutcheon spent 44 years in the NFL, 42 as a member of the Rams. Think of that for a moment, just four years after America’s first race war ended, McCutcheon joined the L.A. team, after being drafted in the third round and became the 70th overall pick of the 1972 NFL Draft. Though he did not play much in head coach Tommy Prothro’s offense in a 6-7-1 season, his future was going to be bright with the hiring of Chuck Knox, and his “Ground Chuck” offensive scheme.

McCutcheon became the reckoning force in 1973 and he didn’t quit there. Former owner Carroll Rosenbloom showed his utter dismay in the team’s 1972 results. Not only was “Clutch” inserted into the offense, but management made some drastic changes bringing in QB John Hadl, DE Fred Dryer, Harold Jackson and multiple draft picks through trades. They drafted well by bringing in LB Jim Youngblood, RB Cullen Bryant and QB Ron Jaworski.

The Rams have a history of great running backs in its lore. Hall of Fame players like Eric Dickerson, Marshall Faulk, Ollie Matson, Jerome Bettis (PIT) and other greats like Steven Jackson, John Cappelletti, Dick Bass and Todd Gurley all come to mind. But McCutcheon is by far the most underrated, unmentioned, and undeniably one of the hardest working running backs in the group.

He put together five consecutive Pro Bowl seasons, four years of over 1,000 yards rushing and one with 911 yards in 13 games in 1975. In a time when “three yards and a cloud of dust” was a prevalent phrase, McCutcheon was the epitome of a workhorse athlete.

McCutcheon appeared in seven playoff games for the Rams, establishing a then postseason record of 202 yards on 37 carries from the backfield against the St. Louis Cardinals in 1975.

The Rams had reached double figures in wins over six-straight seasons, but in 1979, the Rams first Super Bowl season, it was obvious that McCutcheon was no longer the same player because of injuries he suffered in 1978. He found himself as a backup to young Wendell Tyler out of UCLA. He played in 11 games and gained 243 yards on 73 carries.

McCutcheon’s worth was felt in the 1979 playoffs, especially the Super Bowl. The Rams were stunning the Steelers and led the game at halftime, 13-10. Trying to take a hold of the game, finally, QB Terry Bradshaw hit Lynn Swann for a 47-yard circus catch touchdown just five plays into the third quarter.

The gritty Rams did not stand down, as they marched down-field behind Ferragamo and McCutcheon. Ferragamo hit WR Billy Waddy for 47-yards to the Steelers 24-yard line. The Rams caught lightening in a bottle on the next play as McCutcheon began a sweep play to the right, pulled up and lofted an accurate, but wobbly pass to Smith for the lead once again.

Though the Steelers eventually won the game, it also capped a brilliant Rams career for McCutcheon with a simple jubilant pass from the Rams’ soul of the team.

He would go on to play two more seasons with the Denver Broncos and Seattle Seahawks in 1980. He reunited with Knox by joining the Buffalo Bills in 1981.

Clutch returned to the team in a scouting capacity and was promoted to director of player personnel of the Rams in May 2003, a role he held until 2016. When he retired, the Rams couldn’t have been more gracious.

General Manager Les Snead was quoted in an excerpt from theramshuddle.com, “McCutcheon has left an indelible mark on the Rams, as well as the National Football League. The contributions he made as a player as well as a talent evaluator in our personnel department have been invaluable to this organization. We will miss ‘Clutch’ being around on routine basis, but he will always be an important part of our family.”

Hall of Fame teammate Jack Youngblood had this to say in a 1986 interview with foxsports.com: “I loved having him on the team. You just knew when we snapped the ball, he was going to carry it and he was going to get it done. I trusted him a lot as a teammate.”

McCutcheon’s value to the Rams organization is undoubtedly valuable. We only wish he could have been recognized as a sure Hall of Fame candidate.