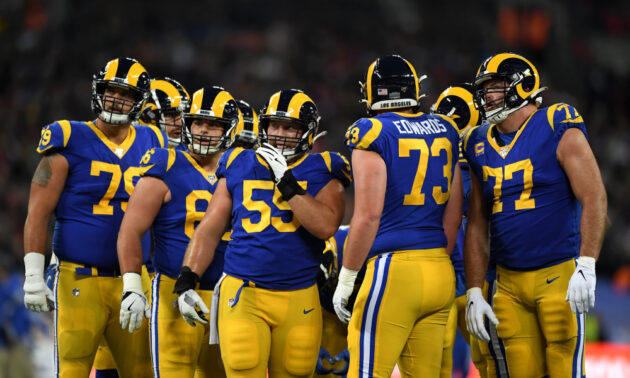 As I mulled over this topic of who to watch during the Los Angeles Rams’ training camp, plenty of players stood out. I first had to push the disheartening reality of having a COVID-19-effected NFL season. For all intents and purposes, I will work under the assumption that the season and training camp will go on as planned.

Once I got down to looking through the roster and narrowing down the players, a few spots initially caught my attention. Darrell Henderson and Cam Akers jumped out to me at first since Todd Gurley signed with the Atlanta Falcons this past March. My mind then went to explosive second round pick, Van Jefferson out of the University of Florida. He could be a nice weapon within the Sean McVay system.

I started to compile research about these players and what holes they could potentially fill and then I had a major realization. As I fervently searched for two more players to round out my list, it dawned on me that none of this matters if the Rams are not sure of their offensive line. Back in December Ben Linsey of PFF ranked the Rams offensive line 31st of the 32 teams in the NFL. With that being said, there are a lot of holes to fill along the line in order for this team to be successful.

The two tackle positions are pretty much set with Andrew Whitworth poised to head into his 15th season on the left side and Rob Havenstein on the right. As great as Big Whit has been as a locker room presence and leader, his production on the field has been slowly diminishing as his tenure rolls on in L.A. We can all expect McVay and his staff to handle Whitworth the same way they have over the last few seasons with scheduled off days, other veteran treatments and rehab worked into his schedule.

As for Rob Havenstein, he has a lot to prove after his performance last season. He earned his lowest grade from Pro Football Focus of his career (50.9) and there could be a lot of factors that lead to this. His biggest issue was dealing with injuries. He only played in nine games and it felt like he never really got into a groove throughout the season. It’s worth looking out for how they handle his training regime in order for him to return to his 2018 form, as well as, the competition for his starting spot. It wouldn’t be surprising if they tried to shop him around if things go south during training camp and the first few weeks of the season.

Bobby Evans did step in as a starter and while he wasn’t perfect, there is a potential replacement for Havenstein should he continue to regress. McVay is about making the offensive line versatile, so the offensive line in general should be interesting to look out for.

The biggest question has to be the interior offensive line. ESPN currently has Austin Blythe at the center spot. This is another one to watch. Not to see the competition per say, but to see how he bounces back from a season that lacked consistency. Blythe has earned his spot up to this point, but if he isn’t careful, he does have the likes of Brain Allen vying for his spot behind him. If the Rams plan to be successful Blythe must step up.

The guard spots are where things get really messy. ESPN currently lists Austin Corbett and David Edwards as the guards with a laundry list of names behind them. I know to take a depth chart in June with a grain of salt, but at this moment I believe keeping a close eye on the offensive line and their progress is the only component that truly has to be watched. We have to see how the competitions between the players fighting for the starting spot as well as injuries and other peculiarities that seem to always come with training camp. The Rams offensive line will be indicative of their success in the 2020 season. If they can regain form, remain consistent and have guys step up their role, they will find success. If they have another rotating cast of characters be prepared for more of the same from last season.