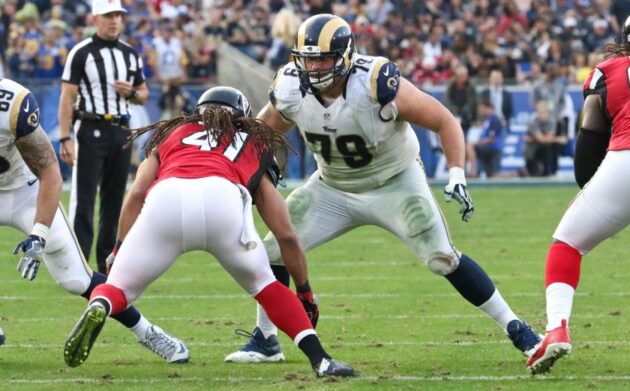 The Los Angeles Rams’ offensive line had a poor showing at the beginning of the 2019 season. They began to improve toward the end, mixing and matching the right concoction of players. Those players consisted of rookies and new starters with minimal experience. Most were replacing several injured players at the line.

The tackle position is not too deep, but there are several options for the Rams. Long-time veteran Andrew Whitworth returns to hold down the left side. Starting at right tackle Rob Havenstein is slated to batten down the other end. In 2019, rookie Bobby Evans played well in Havenstein’s place while he recovered from a knee injury suffered in Week 11. Here is who the Rams currently have at offensive tackle and what they bring to the team.

Whitworth is the eldest player on the Rams and their longest-tenured player at his position playing 14 seasons in the league. At 38, the 6’7,” 330-pound tackle recently re-signed a 3-year/$30 million contract and will resume his role as quarterback Jared Goff’s blindside protector. In 2019, he saw 99% of all snaps and was one of the lucky few that did not suffer an injury on the offensive line. He appeared in all 32 regular season games in 2018 and 2019. Whitworth also hopes to play throughout his contract as he ages and will take his cues year by year.

Whitworth had the most penalties of his career last season. He had nine holding calls and one false start. He is working to lessen his penalty count and is training hard in the offseason. Re-joining guard/center Austin Blythe and left guard Austin Corbett, Whitworth should see improvement on the line in 2020. He will have familiarity and chemistry with the other offensive linemen.

Havenstein is the only offensive lineman on the Rams to have made the trek from St. Louis to Los Angeles. He will be in his sixth season with the Rams. Drafted in 2015, Havenstein is also the tallest on the O-line and 6’8,” 330 pounds. He also made the NFL All-Rookie Team along with former teammate Todd Gurley. He returns this season after recovering from an injured meniscus. Havenstein regressed in 2019 compared to his stellar playing in 2018 where he played 100% of all 1,100 snaps. He also had a career high four false start penalties last season. Injuries may also have been a factor to his poor showing in 2019, but head coach Sean McVay is confident that he is ready to play at right tackle this season.

Havenstein will have a tough job this season since the best opposing edge rushers usually attack the strong side. He is usually on his own when blocking them out. Havenstein also has tough competition with Bobby Evans. The Rams will decide who will start after their performances are evaluated in training camp.

Evans filled in nicely at right tackle during Havenstein’s recovery. As a rookie in 2019, Evans’s first game as a starter was against the Chicago Bears. Although much shorter than Havenstein at 6’4,” 330 pounds, Evans proved to be reliable at the position. He stayed with EDGE Khalil Mack and kept him from Goff the entire game. He also did well against the Seahawks in Week 14, holding his own against EDGE Jadeveon Clowney. Granted that Evans also had help from tight ends, he still performed well overall. He also has the skillset to play other positions across the line. McVay is considering him as a possible guard as well.

Evans played in 100% of all snaps in six of the last seven regular season games in 2019. He had no penalties during his time on the field.

Brewer was promoted to the active roster in the last half of the season after being on the practice squad. He was able to play as a special teamer, seeing 31 snaps. He also saw the field against the Arizona Cardinals win in Week 13 and the matchup against the San Francisco 49ers in Week 16. Brewer is set to back up Whitworth in many depth chart predictions. At 6’6,” 319 pounds, he is a good size for a tackle.

Just over a year and a half ago, Brewer had finished radiation treatments for non-Hodgkin Lymphoma while a senior. He played his final season at Middle Tennessee State and did not miss a single practice or game in between treatments. This tenacity will no doubt carry into his 2020 season with the Rams.

Although the tackle corps seems thin, there is also talk of moving several offensive linemen to other positions. The Rams still have guard Joseph Noteboom, whom is predicted by some sports media to possibly back up Whitworth. Anchrum is also a trained tackle and may be another option, though is undersized for an NFL tackle. Only their training camp performances will tell. The Rams still have a lot to work with at the offensive line. Their priority should be to shore up the weak links from early last season. They may have the answer to the puzzle with the right pieces to fit where they need them.