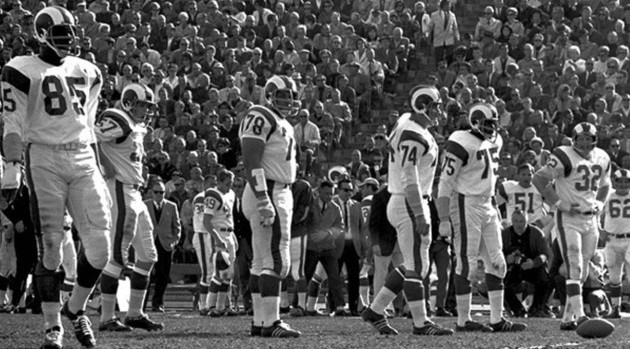 Naming the top 10 Los Angeles Rams players during the 1960s seems simple enough. However, when considering who to include on the list, I included a simple rule: each player had to play for the Rams in at least four years during the 1960s. There are plenty of other talented players that were left off the list, because they only played a couple of seasons with the team. With that in mind, here are the top 10 Rams of the 1960s: It’s amazing and a shame that Billy Truax doesn’t receive the praise that he deserves. He’s one of the Rams’ best tight ends in franchise history, and he played during a time when tight ends weren’t used or coveted much in the passing game. They were almost exclusively used as blockers, which Truax also excelled at. However, that 6’5” frame of his was just too tempting to not use as an offensive weapon for head coach George Allen.

Once Allen exploited Truax’s gifted hands, he became an instrumental part of the passing offense. He averaged about 12.4 yards per catch during his career, and 300 to 400-yard seasons became the norm for him. While those numbers aren’t impressive by today’s standards, Truax was a pioneer for the modern day tight end. Another underrated Rams player from the 1960s has to be Charlie Cowan. If there ever was an effective versatile offensive lineman, it was Cowan. He was originally drafted as a left guard, but eventually found himself playing left and right tackle too. Despite not being a memorable name, he did receive some notoriety by being named to the Pro Bowl three times during his NFL career. One of the Rams’ more consistent wide receivers was Jack Snow, who averaged about 500 yards receiving per season. While those numbers aren’t super flashy, what numbers were impressive was the yards per reception. His career average was about 17.7 yards, but it reached as high as 26.3 yards during his Pro Bowl selection in 1967. Snow was definitely quarterback Roman Gabriel’s top target when throwing the deep ball. His consistency allowed him to finish his career with 340 receptions, 6,012 receiving yards and 45 touchdowns. The Rams’ defense during the 1960s was known for their hard hitters, and aggressive tacklers, a description that sums up the style of Jack Pardee. He certainly benefited from the “Fearsome Foursome” disrupting offensive rhythms, but Pardee had a nose for the football, and actually was one of the better cover linebackers in the league. In fact, he had 22 interceptions in his career, including six in 1967. Despite the hard hits and interceptions, Pardee only made to the Pro Bowl once in 1963. Bringing down running back Dick Bass was always challenging task for opposing defenses. Bass just had a way for fighting for that extra couple of yards before he was taken down. Give a little room to run, and he turned that into a foot-race into the end zone. Bass was also effective as a blocker, which is why he converted into a fullback later on in his career. He eclipsed the 1,000-yard mark twice and finished his 10-year career with 5,417 yards and 41 total touchdowns. Lamar Lundy played in era where statistics such as tackles and sacks weren’t recorded, so it’s impossible to measure his impact through stats. However, if you watched the Rams and the legendary “Fearsome Foursome,” you already know the impact he had. Lundy was interesting to watch, because he wasn’t the stereotypical defensive end. In fact, he was much slimmer and agile, which he used to become a phenomenal pass rusher. His athleticism was so coveted that he was used as a receiver on several occasions on the offense early in his career. Lundy did make the Pro Bowl in 1959, but much of the reason he didn’t earn another one was because much of the attention focused on Merlin Olsen and Deacon Jones during the Fearsome Foursome era. Quarterback troubles aren’t just a recent event for the Rams. Much of the early 1960s consisted of mixture of quarterbacks such as Zeke Bratkowski and Bill Munson, that is until they discovered Roman Gabriel. Gabriel is easily one of the Rams’ best quarterbacks of all time, and certainly deserves a spot on the list. During just the 1960s alone, Gabriel threw for 15,406 passing yards, 109 passing touchdowns and earned three trips to the Pro Bowl. He immediately made the offense relevant, and was one of the reasons the Rams made multiple trips to the playoffs. One of the best Rams players of all time was Eddie Meador. Meador was a force to be reckoned with from the moment he set foot on the football field. Evidence of that was when he was named the Rams’ Defensive Rookie of the Year in 1959. Meador recorded six Pro Bowl berths, and it was certainly warranted with 46 career interceptions and 22 fumble recoveries. He was also known for being a willing and effective tackler. Having Meador in coverage almost made it unfair to opposing offenses, especially with the next two defenders on this list were up front. There simply was no way to choose between Merlin Olsen and the other obvious top contender. They both deserve to top this list. Olsen created absolute chaos from the defensive tackle position. This is a position that generally doesn’t see big numbers, and if the sack stats were official back then, he would have had some of the best, if not the best numbers from a defensive tackle in NFL history. He made the Pro Bowl 14 of the 15 seasons he played, and the only time he didn’t make the Pro Bowl was his last season in 1976. Olsen is a worthy Hall of Famer and one of the best to ever play the game. One of the most intimidating presence in NFL history was none other than Deacon Jones. There are no official sack numbers for him, but there is plenty of film highlighting Jones’s illustrious career. Jones registered an unofficial career sack total of nearly 175 sacks, which is impressive considering this is at an era of 14-game seasons. He earned eight Pro Bowl berths and became an example for what the modern day pass rusher should strive for. Jones truly affected the game today, because it was his career that would justify sacks in becoming an official statistic. Any player that can have that kind of influence on the game is certainly worthy of being considered one of the best players to ever play the game.