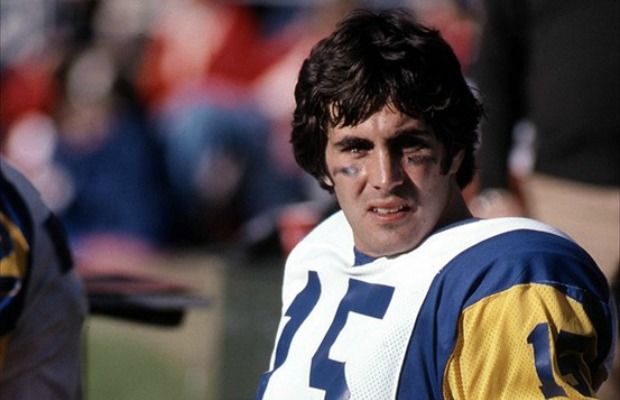 Vince Ferragamo was one of the most significant quarterbacks in the history of the Los Angeles Rams franchise. He’s one of just two quarterbacks to start for the team in the Super Bowl. However, that doesn’t mean he put together one of the best stretches a Rams quarterback has ever had. Ferragamo was an important player for the Rams, but he shouldn’t be considered a team legend.

Ferragamo was selected in the fourth round of the 1977 NFL Draft after a successful collegiate career at Nebraska. He spent the first two seasons of his career backing up Pat Haden. Ferragamo then got his first opportunity to lead the team after Haden suffered a fractured pinky, which sidelined him for the last five games and the playoffs in 1979.

Ferragamo made his first career start late in that season. By the time he took over, the Rams were already 5-6. Ferragamo helped turn the season around, leading the team on a four-game win streak that ended with the Rams clinching the NFC West title. The team continued its success through the playoffs, winning the NFC Championship. Ferragamo’s play during this stretch wasn’t exactly memorable. He completed less than 50% of his passes and threw twice as many interceptions as he did touchdowns during the last five games of the regular season. Ferragamo didn’t throw for a touchdown during the 1979 NFC Championship game or Super Bowl XIV.

Los Angeles began the 1980 season with Pat Haden as the starting quarterback, but Ferragamo quickly took over following Haden’s poor Week 1 performance. He put up the strongest numbers of his career, throwing for 3,190 yards and 30 touchdowns. The Rams made the playoffs, but they lost to the Dallas Cowboys in the wild card round.

Ferragamo’s contract was up following the 1980 season. Rather than re-sign with Los Angeles, he chose to take his talents to Canada for a year and play for the Montreal Alouettes. His stint in Canada was brief, and Ferragamo was back on the Rams for the 1982 season.

In his five starts during the lockout shortened NFL season, the Rams only won one game. Ferragamo did produce a memorable 509-yard performance in a loss to the Chicago Bears, which at the time was only the third 500-yard performance in NFL history. Ferragamo also recorded a stellar 1983 season, throwing for over 3,000 yards for the second and final time in his career. He led the Rams to the divisional round of the playoffs.

The 1983 season was the final time we would see Ferragamo play good football. He appeared in only three games for the Rams in 1984, before spending the final two seasons of his career with the Buffalo Bills and the Green Bay Packers. He retired following the 1986 season.

Vince Ferragamo was one of the most memorable quarterbacks in the history of the franchise. He helped lead the Los Angeles Rams to their only Super Bowl appearance before moving to St. Louis. That said, he shouldn’t be considered among the best quarterbacks to play for the Rams. He was never named to a Pro Bowl. Sam Bradford passed for more yards during his time with the Rams than Ferragamo did. He is an important part of the history of the franchise, but Vince Ferragamo isn’t one of the greats.