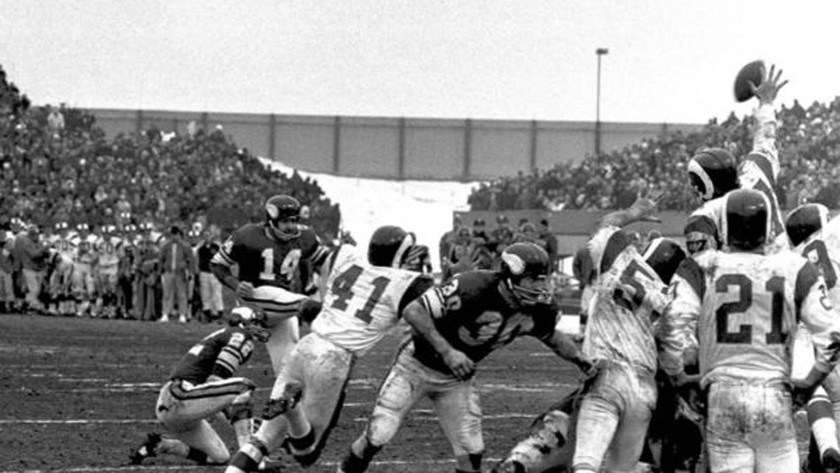 The Los Angeles Rams travel to Green Bay, Wisconsin Saturday to take on the No. 1 seed Packers, in an NFC Divisional round game at Lambeau Field, a site well known for its cold weather and obvious home field advantage on such days. One thing is for sure, there won’t be anywhere near the 81,435 rabid fans in the stands to bait the visitors by throwing snowballs or frozen cheese sticks at them during the game.

Here is what the Rams have to look forward to (the Packers too, because they have to play ball too, right?) as Saturday’s forecast includes the following: “A few snow showers scattered about the area in the morning, otherwise a good deal of clouds. Temps nearly steady in the low to mid 30s. Winds NNW at 10 to 20 mph. Chance of snow 30 percent.”

Thought it would be a treat to look back at the Rams playoff history of playing in cold weather, and for this report I am using any weather under 40 degrees as a barometer (pun intended).

Recently on Twitter, former Rams QB Jim Everett had a funny tale for playing in the cold. He wrote:

Funny cold weather story. While playing a super cold game @ Green Bay, we decided high 5s were out & head bumps where in. Problem was one of our DBs didn’t have his helmet strapped up during pregame warmup. He helmet bumped & his helmet slid, then his front tooth fell out! ? pic.twitter.com/l9UTwQekcJ

Well there will be plenty of head butting going on Saturday, and both teams will be strapping up those helmets for a chance to move on to the NFC Championship game against either the New Orleans Saints or Tampa Bay Buccaneers.

Without reaching too far into possibly another story on Rams Talk, weather has to be a concern for the sunbathed Rams. The Rams, you might be surprised, are actually 6-6 in cold weather conditions, and have won three-in-a-row to boot.

An illustration of the concern is noted in a recent December 2018 regular season game in Chicago. Starter Jared Goff didn’t have his best day as a pro, and the concern of his ability to perform in frigid weather is something to not look past.  The Bears dominated L.A., 15-6 and held the team to just 214 total yards and six points. Goff decided to play without gloves, and some believe his four interceptions that night and his 19.1 passer rating was a reflection of the weather and lack of gloves. This will be something to watch for at Lambeau Saturday.

To put us in the right mindset, “The Green Bay Packers have played in 12 games since 1940 where the recorded temperature was 4 degrees or lower (not counting wind chill), the most of any NFL franchise,” according to Madison.com.

Despite what I have already written about home field advantage, the Packers actually have a losing record in those 12 games (yes, I know it won’t be that cold Saturday). Seven of those games have been played at Lambeau where they are 3-4 overall.

From earliest to the present:

Up to that date in NFL history, no championship game had been played in colder weather. The teams endured -8-degree weather as the Rams won the title 15-14. It was Cleveland’s last game before its move to L.A.

The Rams were defeated in the NFL Championship game 30-28. The game was played in 29-degree weather, much like what this year’s version of the Rams will see in Green Bay this weekend.

The Rams defeated the Lions in a cold rain, and heavy fog playoff game.

This game was played at Milwaukee County Stadium where the game-time temperature was 13 degrees, with a wind chill factor of -3 degrees. The Rams were favored by three points and scored the first points of the game. But the Packers scored 28 unanswered, and their defense sacked Roman Gabriel five times. Rams RB Dick Bass had just 40 yards on 14 carries, with a long of 15 yards.

This game was played at Metropolitan Stadium and the game time temperature was a brisk 29 degrees with a wind chill of 19 degrees. The Rams were the 5.5-point underdogs in this game, but three Rams had great games in the loss. QB James Harris was 13/23 for 248 yards, a TD and two interceptions. RB Jim Bertelsen had 14 carries for 65 yards and caught five balls for 53 yards. Harold Jackson caught three passes for 139 yards and scored one time.

The game’s weather registered in at 19 degrees with a wind chill of seven degrees. This game saw the Vikings’ Chuck Foreman devour the Rams defense and the Vikings scored the game’s first 17 points. The Rams would storm back to within four points with the whole fourth quarter to play. Minnesota’s Sammy Johnson tacked on the last score for the win.

In an abnormally cool day in Dallas, the weather at game time in Texas Stadium was 20 degrees with a wind chill factor of seven degrees. Dallas was favored by eight points but Rams head coach John Robinson had his boys ready to play. Vince Ferragamo had a solid day at quarterback going 15/30 for 160 yards, three touchdowns and no turnovers. Meanwhile, RB Eric Dickerson racked up 99 yards on 23 carries.

Soldier Field was not too kind to the Rams when the weather reached a mere 36 degrees with a wind chill of 26. The Bears were 10.5-point favorites in the game and proved it. If you are looking at Ram QBs playing in cold weather, Dieter Brock’s day was easily a low-point. He was 10 of 31 for 66 yards and an interception. Without Dickerson running well (17 rushes, 46 yards), it’s no wonder Brock couldn’t get it going.

This game was played at RFK Memorial Stadium in 35-degree weather and a wind chill of 29 degrees. Washington would score the first 16 points of the game, but Dickerson and Everett tried to battle the team back. Dickerson ran for 158 yards, and Everett had 136 through the air. Unfortunately, it wasn’t enough to overcome the Redskins.

This game doesn’t count. Thought I would just stick it in because it was against Los Angeles’ playoff tormentor. The game was played inside the Hubert H. Humphrey Metrodome. The weather outside was 20 degrees with six to 12-inches of snow and blustery winds. Inside the dome was much warmer though.

Thirty-four degree weather greeted the Rams to the City of Brotherly Love. The wind chill was at 27 degrees, but the real heat came from the Rams on this day. Everett was 18/33 for 281 yards, two TDs , and two interceptions. Running Back Greg Bell had 124 yards on 27 carries, Henry Ellard had 87 yards receiving and Flipper Anderson had two catches for 77 yards.

Giants Stadium hosted Los Angeles where 37-degree weather in New York was a blessing. The wind chill settled in at 29 degrees.

Running Bell had 87 yards on 19 carries, Ellard had 125 yards receiving, Anderson had two touchdowns and Everett passed for 315 yards and two TDs.

Yup, just last week! The temperature at game time was 39 degrees, just under the threshold, but we will take it. Details of the game can be found on this link.

So there you have it; a look at the Rams cold-weather games during the playoffs. Here’s to hoping the Angelinos come through with another win against a very strong Green Bay Packers team.