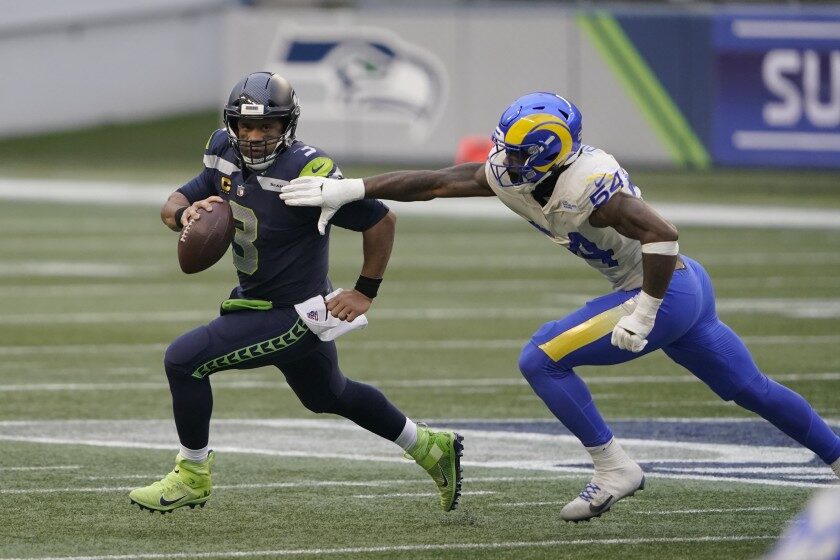 Goff guts through in a pinch; Injuries cast doubt on upcoming week

Tough to figure what the lead for a reflective story of this nature was going to take, so I will just lump it into just one big victory ball! Cam Akers had a career-making day. The No. 1 defense in the league swarmed the Seattle Seahawks’ offense, choking the life out of it at nearly every turn. And Jared Goff relieved an injured John Wolford, who got his first playoff start in his career, playing through the obvious limitations his surgically repaired thumb presented him, to lead the Los Angeles Rams to a 30-20 win over the No. 2 seed Seahawks in Seattle, where they hadn’t lost over their last 10 previous playoff games.

Akers, coming off a high ankle sprain over the last few weeks, may have put his stamp on the starting running back position after rushing for 131 yards and adding 45 yards from the air, and a touchdown. Akers was strong from the very start, which was a good sign because Wolford was going to need some help keeping the Seattle defense off-balance if he were to produce as he did the week before. He set Rams rookie records in the process.

Lining Wolford up under center was the first disguise as Akers took three-straight handoffs for 11 yards and a first down. The drive petered out soon after, but it was the Rams’ second drive that saw Wolford and Akers begin to get a real feel for the game. Akers took two more carries for 17 yards before Wolford found Cooper Kupp for 12 and 13 yards and two first downs. Fifteen more rushing yards by Akers put the Rams into the red zone for the first time in the game.

The red zone hasn’t been nice to the Rams this season and it wouldn’t get any better on the next play. On a designed run that head coach Sean McVay said after the game, “[He] was really mad at himself for calling that play and putting his quarterback in that position.” Wolford ran right off the tackle and legally became a runner losing his protections as a quarterback. As he went to the ground head first, Seahawk defender Jamal Adams came in and hit Wolford’s helmet with his shoulder pad. A direct violation of targeting a defenseless player. There sat a flag on the ground next to Wolford, but it was waived off as a non-penalty.

Wolford would not return to the game, and he was later transported by ambulance to the hospital for observations. According to McVay, Wolford had returned to the stadium and was in the locker room for the post game celebration. The coach described the injury as hopefully just a “stinger” and all precautions were taken because it was a neck injury.

Enter Goff, who hadn’t thrown a pass since pre-game warm ups, cold and certainly not with the same strategic game plan as Wolford. An Akers run and a sack of Goff stopped the first drive into the red zone. Matt Gay put the Rams up early 3-0, with a lead they would never relinquish. Why? Here’s why?

McVay said it best Saturday night when he indicated he comes to expect this type of play from his No. 1 defense in the league, because they are “11 that play as one.”

Darious Williams, who intercepted a Russell Wilson pass and returned it for a 42-yard touchdown, was very insightful after the game when asked why he thought the defense was able to respond after Aaron Donald’s injury. He said Donald is Aaron Donald and there is no one like him. But the defense is so deep and has so many playmakers that anybody at any time could make a play. We have a lot of depth. It speaks volumes about our defense on how we can answer the loss of a player like Donald, Williams continued to say.

McVay said Williams’ play was the big momentum shift for his team. “He really came to play,” said the coach.

Donald suffered what appeared to be a rib injury after tackling Wilson, it appeared Donald hit the turf wrong during the fall. He went to the locker room a couple of times for treatment, and returned to the sideline in the fourth quarter. He appeared to be ready to re-enter the game, but a late Rams touchdown made the need for him mute for the team, especially as he watched his mates from the sideline succeed without him through Seattle’s final two drives.

The Rams sacked Wilson five times, twice by Leonard Floyd, and had another turnover by the special teams thanks to Samson Ebukam and Micah Kiser, who stopped DJ Reed on a punt return giving the Rams the ball back in Seattle territory up 23-13.

Seattle managed just 278 yards on offense, two of 14 on third down, while scoring two touchdowns, one of which came when the game was decided.

Kupp suffered a right knee injury during a fourth down try where it appeared he was stepped on or he miss-stepped himself and twisted the knee. Kupp tore his ACL in the last Rams run to the Super Bowl. Thankfully, it was announced that the injury is just a knee contusion and Kupp is expected to be ok.

Goff showed true grit and experience in relief of Wolford. It really showed when he hit Robert Woods in stride on a nifty play action pass, drawn up by McVay specifically for the red zone, which put the Rams up 17-points with 4:46 left in the game.

Matt Gay was perfect on field goals for the Rams hitting from 40, 39 and 36-yarders.

“Goff being ready even in a limited capacity was the best option for the team,” said McVay. “Jared stepped in and handled things incredibly well.”

The Rams will likely play the Green Bay Packers. However, if the Chicago Bears upset the New Orleans Saints, the Rams will face the Tampa Bay Buccaneers instead. The Rams haven’t played the Packers this season, but did have a 27-24 victory over the Bucs back in Week 11.