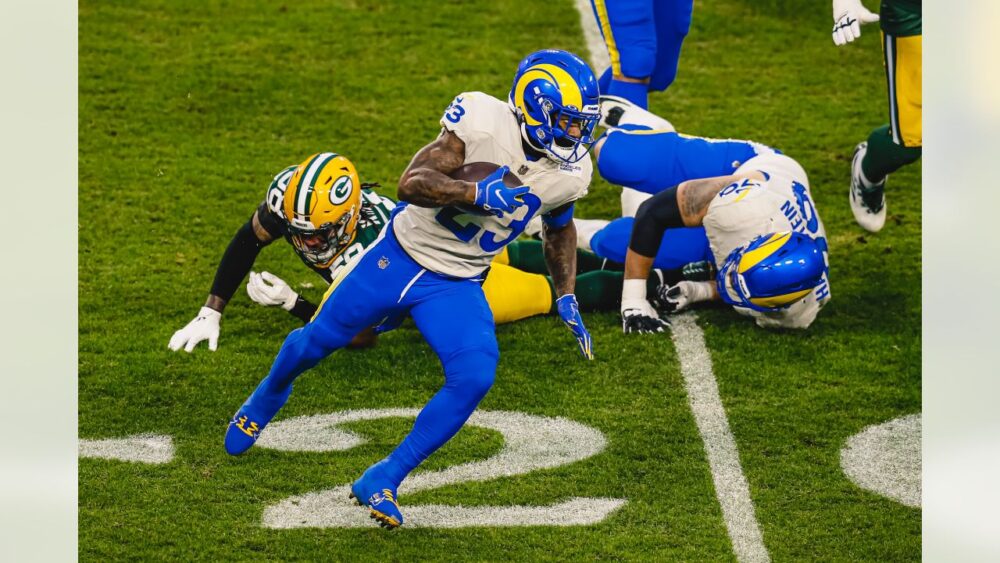 When good teams (Rams) do what they are supposed to do, the great teams (Packers) find ways to win.

I said a lot there without really saying anything, yet, when you sit back and read it again, you will find it to be true. Because of this, I have no angst about the outcome of the game. Questions? Yep! Differences is philosophy? Probably.

One thing for sure, the tears I saw coming from All-Pro defensive tackle Aaron Donald, near the end of the game, not only did it solidify my esteem for the player he is, but it also explained to me why he was only used on 55% of the defensive snaps. He gave his team, all he could give, and when he was in the game, he played 100% of what health he had. Deep down, he knew things might have been different against the rushing attack, and more importantly the passing game, because a healthy Donald would have most certainly made Aaron Rodgers more uncomfortable, given him less time to throw, and it would have wiped that smile he had right off his face.

The sight of Rodgers grinning ear-to-ear for most of the game was the single worst part of the game in my eyes. His eyes told the whole story Saturday. Because Donald wasn’t in play, it meant Green Bay head coach Matt LaFleur could change his blocking schemes with ease, keeping the likes of Michael Brockers, Sebastian Joseph-Day and Leonard Floyd out of the backfield as well.

Rodgers was just full of glee after the game while praising his offensive line, “I was hardly touched the whole game,” he said with another wide-open smile.

In a game billed as the No. 1 offense versus the No. 1 defense, it turned out the defense, who doesn’t give up big pass plays over the top, became susceptible to the “dink and dunk” and vulnerable to the running game. In my mind, the latter was the biggest surprise of the game.

The Rams gave up 188 rushing yards to the Packers. I am a firm believer that defensive breakdowns and miscues give up big running plays, with that said, Aaron Jones’s 60-yard run opening the third quarter, was the set-up play to the one big play Rodgers engineered midway through the fourth quarter and only seven points separating the teams. The play action pass was sold to perfection and saw Allen Lazard split the coverage, which wasn’t close enough, of Troy Hill and Jordan Fuller for an easy 58-yard touchdown that blew the game open.

While Jones was held to 39 yards on 13 other rushing attempts, it was the hard running of Jamaal Williams that proved to be the difference for the Packers. Having firmly entrenched themselves in the run game, the best scoring offense in the league decided to drop off passes in the flat, to backs on outlets, and six-yard routes against defensive coverage that played four to six yards off the line of scrimmage on a consistent basis.

Coupled with unexplainable penalties in the first half really hurt the Rams. Giving up 30 yards for unsportsmanlike conduct and unnecessary roughness penalties really meant a difference to the Packers. According to NFL Stats, the Rams had, in the regular season, a total of four such penalties combined. And another point, the Rams defense has a sack or an INT in all 17 games this season, but not this game.

It’s no wonder Rodgers had the time to laugh his way through the game.

The Rams didn’t quit though. Down 16-3 in the first half, the offense seemed to have a grip of their gameplan as well. They had four possessions in the half and went three-and-out on the first and third possessions. They still looked good, despite the loss of WR Cooper Kupp, RB Darrell Henderson and OG David Edwards.

In their place, Cam Akers continued to show he is very much the future of the backfield, and Van Jefferson showed his worth in becoming the third-down receiver. The two will be stars in the years to come. Plus, Jared Goff was magnificent running the offense. The total yardage wasn’t large, but the body of work shows he comes to play all the time. Good or bad, injured, cold, or not; he has a tough character and mentality.

If that isn’t enough for the naysayers, just look at this third-quarter drive:

At that point of the game, Goff was 16 of 18 passes with a touchdown pass and no interceptions. For the second game in a row, he did not turnover the ball. Akers had 81 rushing yards by the end of this drive, and finished with 90 for the day.

Two other points on the offense comes on the part of head coach Sean McVay. For all the criticism of having a stale playbook, employing the Wildcat three times in the game, can only give headaches to defensive coordinators in the future. Because Akers has played quarterback in his past, it gives the Rams another wrinkle that should be explored in the offseason. Secondly, his designed hook-and-ladder play on a two-point conversion was a hit on social media and designed brilliantly for that moment.

The Rams season is over and there will be a lot of self-examination to do. The team has 17 players scheduled to go into free agency after the Super Bowl, and among them are several key defenders that should be looked at first. A new defensive coordinator will have to be located now that Brandon Staley is moving across SoFi Stadium to take over the Chargers reigns at head coach. Special teams needs to be addressed as well, though Matt Gay needs to be a priority here as well.

The Rams have been to the playoffs on three of McVay’s four years, have a winning record under him, two division titles and a Super Bowl appearance. They should be looked at as a contender for years to come and are very much relevant in the NFC West.

Let’s remember one thing: Super Bowl LVI (2022) will be played in SoFi Stadium. It would be nice to see the Rams there as well.