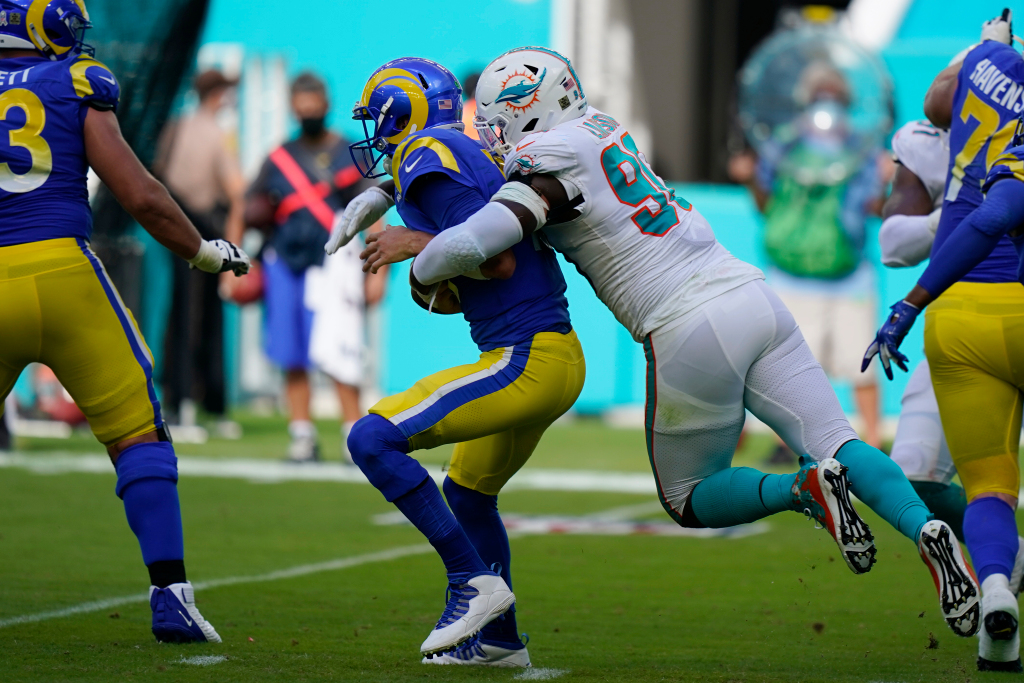 Thought I would take some time this week to gauge the feelings of the fans from the post-Dolphin debacle. Typically, their reaction was what I would expect; calling for Jared Goff to be traded, draft another QB next year, to even firing Sean McVay.

What I see is that swirling motion of the toilet as the Rams playoff scenarios begin to fall into the septic tank, quite  quickly too.

We are in the one season, where playing the AFC East teams looked to be favorable for the Rams, yet here they stand 0-2 against the Bills and Miami, with New England and the New York Jets coming to SoFi Stadium later this season.

Sitting at 5-3 at the bye would be an optimal position for any team, but when you look at two losses to sub-par teams like Miami and the 49ers, you have to wonder what to expect for the rest of the season. But that is for another column to write about.

If you had no idea what happened in Miami Sunday, and I told you Miami had 56 yards of total offense in the first half, and that the L.A. offense was out of synch for the whole half, what would you think the score of the game would’ve been? 3-3? 7-3?

Nah, it was actually 28-10! Can you believe it? You wouldn’t have believed it if you didn’t see it for yourself.

First things first, Goff is 6’4 ” QB and weighs 222 pounds, but you would have thought he was the reincarnation of Pat Haden (5-11), who was gifted with the ability not to be able to see over the offensive line. Goff had four passes tipped at the line, and instead of two interceptions, could have easily had four in the game. Then he seemed to not have any pocket awareness in this game. It was like his sixth sense was left in a motel room. He never tucked the ball away to take a sack, he continued his focused awareness to get the ball out to the receiver without even feeling the rushing defenders.

Top all that off with 63 total passes thrown in the game, and you have to wonder what the heck did I just watch? The running game was motoring along with Darrell Henderson gaining seven yards per carry, why go away from that?

The Los Angeles defense was fantastic once again. This what not their fault, they gave up 22 points, all in the first half, two of the touchdowns came on short fields, well within Rams territory. Just to touch on this again, six of the eight games the defense has held their opponents to three or less points in the second half. The Rams have outscored teams in the second half, 100-23. Fourteen of the 23 points allowed were scored by the Bills.

The Rams were a plus-326 yards of total offense over the Dolphins, yet by watching the sports media outlets, you would have thought rookie Tua Tagovailoa (9/22 for 93 yards and a touchdown) had the game of a lifetime in leading Miami to such an important win.

Gerald Everett was not a big help to Goff and the Rams in this game as well. He seemed like he caught Cooper Kupp’s yips from two weeks ago. He dropped two sure first down passes; one could have gone for huge yardage. When you are trying to replace or bring more to the game because you are down a tight end, you need to make those catches. Right?

Robert Woods got back on track running and catching a pass for touchdowns. It was nice to see him get back to the player we expect week in and week out.

Los Angeles will play five NFC West opponents over the last eight games of the season. If there was ever a time to be “go time,” this is it. The Rams’ path to the playoffs runs through Tom Brady, a depleted Patriots team and the Jets. Winning those three games gives the Rams eight wins and that means three of five wins in the division should get them in the playoffs, and possibly plugging up the drain to the septic tank. It will be far from easy though.