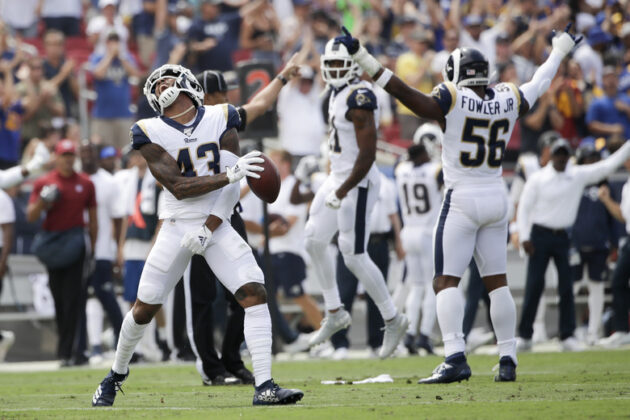 As training camp arrives July 28 for the Los Angeles Rams, and the rest of the NFL, it brings us to the end of an arduous offseason that saw departures, additions and a certain virus that will most certainly change the landscape of how the Rams deal with playing football and protecting themselves.

Rams Head Coach Sean McVay became the lead man on offense in 2017 when he took over the team. There is no question what his mind and game plans have brought to the team. But, in-game issues have plagued his abilities to make quicker, sounder decisions as the league has adjusted to his style.

Enter Kevin O’Connell who was hand-picked by McVay to “help” in game planning and be the eye in the sky that McVay hasn’t enjoyed much in his tenure. O’Connell, now the offensive coordinator, came from the Washington Redskins after serving the 2019 season as their O.C.

O’Connell spent three seasons with the Redskins; he also was the team’s passing-game coordinator in 2018 and quarterbacks coach in 2017. What this experience means is that McVay won’t have to be the only voice in QB Jared Goff’s helmet as the team prepares to reach the playoffs again in 2020.

O’Connell has a proven track record with quarterbacks, most recently with Dwayne Haskins (2019), Alex Smith and Kirk Cousins.

There was no doubt former defensive coordinator Wade Phillips was a stabilizing force when he joined McVay as the veteran mentor to the youngest head coach ever. We saw Phillips in the forefront coaching the team, as McVay would retreat to the bench with his offense to look over film, and try to devise different plans while the game played on. That was a strange sequence to see, but it worked for a long time.

Phillips’s time had come and gone, thus the move had to be made this season. Phillips, ever the master of changing game plans at halftime and making the right moves during the game, was figured out by the other coaches in the league. The defense’s look had to feel that the good quarterbacks knew what they were coming with and audibled out to a better play.

Change was needed and Brandon Staley was the choice from the Denver Broncos. Staley, a relatively unknown defensive coach with no coordinator experience, but a ton of experience dealing with perennial all pros, like Khalil Mack, and in Denver where he worked closely with pass-rushers Von Miller and Bradley Chubb. Now he inherits a unit that boasts two-time NFL Defensive Player of the Year Aaron Donald, All-Pro cornerback Jalen Ramsey and the return of Michael Brockers.

L.A. will be looking for an overall upgrade in the team’s statistical status, much like the Chicago Bears had in the two years Staley helped coach the defensive team. According therams.com, he helped the Bears achieve, “[a] tie for second in the NFL in sacks (92.0) and had the third-most sacks by a linebacking corps (51.0) in the league. Chicago led the NFL in takeaways over that span (58) while also ranking in the top-six in the league in scoring defense (17.7 points per game, fourth), total yards (299.7 yards per game, sixth) and rushing defense (80.0 rushing yards per game, second).”

Stats like this would most certainly win plenty of games for Los Angeles.

The Rams and general manager Les Snead seemed to have outdone themselves with the 2020 NFL Draft class. Though time will tell just how well. On paper, it looks like many holes were filled quite nicely.

With the sudden departure of Todd Gurley, no first-round pick and the need for specialty players and lineman; this NFL Draft looked to be desperate times for Les Snead and the gang.

Coming into the 2019 season, it was well known the Rams were going for broke with regards to the payroll, after a disappointing showing in Super Bowl LIII. They gambled and lost in 2019.

The results? The Rams had to make big decisions with their salary cap deficiencies and saw great players like Dante Fowler Jr., Cory Littleton, Greg Zuerlein and Marqui Christian walk out the door. Michael Brockers did as well, but fate was on the Rams’ side when he failed his physical with the Ravens and returned to the team.

This is the story of the year, and will surely be the difference of who makes it out of the most difficult division in the NFL. Which team is going to stay healthy?

Recently McVay asked in a recent latimes.com article, “We’re talking about some of this stuff and we’re playing football. I mean, we’re going to social distance but we play football? Hey, this is really hard for me to understand all this. I don’t want to be … I don’t get it. I really don’t.”

Nobody does. Therein lies the problem for the whole league. Football is a contact sport, a full contact sport, where bodies are constantly in contact with each other.

This virus will be a story from Day 1 moving forward.

When the Rams returned to L.A. two things were known, the team would be playing in a new stadium, and the team was going to re-brand itself in line with their state-of-the-art stadium.

For four years, fans took to social media to give the Rams ideas of what the uniforms, colors, helmet and logo should look like. But what I saw, they wanted a return to the old glory years in some shape or form. Not a re-branding, which means a new look, and not bringing back the old days in L.A.

The team brought out all the new looks, which shocked me at first, but they have grown on me as time has passed, but the backlash of the fans really stoked some fires. Some fans wanted to leave the team, some said they would never buy the new gear. It was shocking to see all this play out.

Still it was sad to hear and read because we root for the team, right?