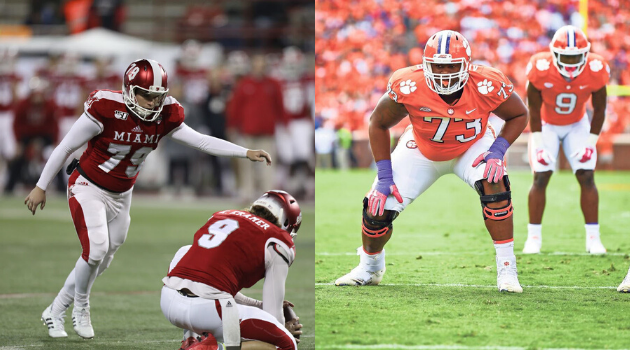 The Rams are brewing quite the competition at kicker after losing Greg Zuerlein in the offseason. Recently, they added AAF/XFL K Austin MacGinnis and CFL K Lirim Hajrullahu. Adding Sloman into this competition will make this one of the more interesting kicker competitions ever witnessed.

Sloman has quite the reputation of nailing long field goals, making 4/5 field goals from 50-plus yards in 2019. That said, he did have five other attempts from 50-plus yards throughout his career and missed all of them. He never had a blocked kick though. He has plenty of leg-strength for kickoffs and did improve a lot over the seasons at Miami (OH).

Anchrum actually played primarily as a tackle, however, he lacks the desired size and arm length to be an NFL offensive tackle. He will have to be shifted to guard or center. The problem with that is that Anchrum lacks the experience, so he will need to be a fast learner.

The Rams have a surplus of backup guards at the moment, but center could always use some competition. Currently, Blythe is slated to be the starter with Brian Allen competing for the starting role. Undoubtedly Anchrum will have a reserved role, and must learn quickly if he wants a roster or practice squad spot.

Where Anchrum excels is his quickness off the snap and powerful, sturdy frame. He’s surprisingly agile for a man his size and could have the making of a solid interior lineman if he can learn the position quick enough. Either way, a team could never have too many big bodies.