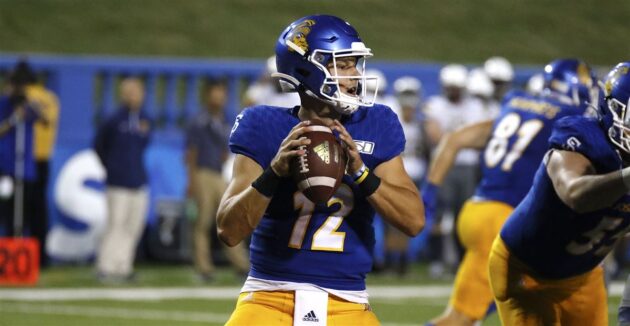 Immediately after the Los Angles Rams selected their 2020 NFL Draft class, they signed 20 undrafted free agents. This process tends to change up throughout the week, with new additions or sometimes some of the signings don’t workout and the player signs with another team. We will update the list as soon as possible.

The Rams currently only have Jared Goff and John Wolford on the roster. So far, they’ve been content with running two QBs on the active roster and the occasional QB on the practice squad. Perkins offers more mobility as he is quick and often threw on the run. He has a decent arm but not always accurate. In fact, consistency is a concern. If things didn’t go his way, he’d often give up on passing and resort to running.

It’s a surprise Love went undrafted. There’s a lot to love about his game such as confidence in the pocket, quick release and elusiveness from defenders. There’s some seriously impressive game film of him getting away from defenders. Not bad throwing on the run too. The problem Love faced is that he only started one year and played with terrible receivers. So his accuracy isn’t encouraging at all.

Gilbert technically played four seasons at Ball State before transferring to Kansas State and played their for one season. He’s more of a powerback and is a good option for goal line plays. Not particularly fast and his vision isn’t the most impressive. Gilbert isn’t easy to take down though.

Last season Gilbert ran for 737 yards on 141 attempts and had six touchdowns. The best way to describe Jones is extremely shifty. He has an arsenal of juke moves and can actually stop-and-start effortlessly. While he doesn’t have mind-blowing speed, he isn’t someone that you want to see the open field because he has a motor. While the RB position is pretty much set, Jones might be an intriguing option as a return specialist.

Last season with the Mustangs he ran for 1,276 yards on 244 attempts and 23 touchdowns. He also caught 20 receptions for 90 yards and two touchdowns.

While with the Sun Devils, Cabral oddly played tackle and center. He’ll likely be converted to playing center and guard. He possesses intriguing size standing at 6’5″ and weighs about 300 pounds. Lacks desired athleticism and doesn’t use his arms as well as he should. He’s solid at pass blocking but one of his biggest knocks is finishing plays. Doesn’t play through the whistle, which can have some huge consequences in the NFL.

Polk initially played four seasons at Penn State before transferring to James Madison after seeing limited playing time. Polk is a smaller, speedy receiver. He will likely be considered for a return specialist role. The biggest overall concern is him being too small for NFL contact. Polk needs to bulk up. That said, he has decent speed and is good at cutbacks. Edwards is another smaller receiver that will need to bulk up, but he was a productive receiver while at Maine. He has great vision and plays much bigger than he actually is. He may actually serve better as a receiver than a returner, but he does have experience playing both.

Edwards finished the 2019 season with 49 receptions for 1,097 yards and 11 touchdowns. He also returned two kicks for touchdowns.

Winston won’t blow away anyone with his speed, but he’s fast enough to make defenses pay if he gets in open space. Didn’t exactly dominate secondaries, and will likely struggle against elite corners of the NFL. He has decent hands and runs adequate routes.

Last season with the Cougars he caught 85 passes for 970 yards and 11 touchdowns.

The biggest issue Koski is facing is coming from such a small school. He didn’t exactly dominate but he did make some big plays. Most notably his focus on the ball is impressive. He’s a well-rounded player, meaning he doesn’t really excel in one particular area but is decent in most areas. Koski has experience as a return specialist too.

Last season with the Mustangs, he caught 41 passes for 862 yards and eight touchdowns.

Jackson began his collegiate career with Michigan State and transferred to Syracuse. The interesting thing is he was only productive the final year at Syracuse. Still, his speed is intriguing and is dangerous with the football. Although, he struggled locating the football when heavily covered, especially with taller defenders.

Banks primarily played DE while at UTSA. His size generates interest standing at 6’5″ and weighing in at about 270 pounds. His size didn’t translate into production though. Last season, he accumulated 23 tackles, two sacks and two pass deflections. Coming from weak conference, that’s a little concerning. The Rams could experiment though and try him out at LB.

Williams is instinctual and constantly finds himself around the ball. Not particularly strong, but tends utilize his wrap-up tackles effectively. His speed isn’t anything special, but still opposing foes prefer not be hit by him with momentum on his side. Hoecht has some incredible strength and there is plenty of film showcasing him running through linemen and running backs. He tends to tackle high, which will be an issue on the next level. Runs on the outside edge with plenty of quickness and ferocity. But playing in the Ivy League doesn’t exactly see much competition.

He earned 42 tackles, nine tackles for a loss and four sacks last season with the Bears.

Not a lot of tape on Renner due to injuries. Last season was his only productive season with the Gophers. Played mostly DT and is quick with a long set of arms. Tries to do too many one-armed tackles, which won’t work on the next level. Still, not bad production for an interior defensive linemen. Rozeboom is not the most intimating linebacker specimen, but he is tactical one. His coverage skills are adequate and is a tackling machine. He won’t penetrate the line of scrimmage too often, primarily because he lacks the ideal strength. Still, he may make a decent backup ILB.

Reaves isn’t a large player, but tends to play bigger with his strength. It’s difficult to say where exactly he’ll play in the NFL, but may need to transition into an OLB. While he does possess good speed, he will overrun his target. Tackling skills are adequate.

He played mostly DE in 2019 and earned 64 tackles, nine tackles for a loss, four sacks and had an interception. Ghawoloku has quite possibly the most interesting backstory out of any prospect. He originally came from Liberia and moved to Utah to escape the war-torn nation. He kicked off his career at BYU under the name Dayan Lake but later changed his name to Ghanwoloku to honor his deceased uncle.

As for football, Ghanwoloku has blazing speed, not the best in coverage, but hits hard. He could shift to safety to make more use of his talents. Would be someone to consider as a return specialist and as a special teamer in coverage.

While a willing tackler, Taylor’s size and frame doesn’t allow him to be an effective tackler. He’s the type of guy that will come to work for any coach he has, which speaks volumes for his competitive nature. While his coverage isn’t great, he has the speed to keep up with speedy slot receivers, which may be a potential role as a nickle-corner.

He missed a few games and only played in nine total games last season with the Seminoles. He managed to earn, 37 tackles, one interception and three pass deflections.

At one time, McGhee had a promising road to the NFL Draft. He was known for being a star nickle-corner and played well until sustaining a foot injury in 2018. He never returned to the same player ever since, and he lost his starting role to incoming younger players. The potential is still there, but he will need to be a sponge on the next level.

Hughes is an aggressive DB that tends to bully foes. Sometimes he gets a bit carried away, but overall, controls the routes as much as possible. His quickness is solid, coverage is adequate and tackling skills are surprisingly good. He does comes from a smaller school, which is one of his biggest hindrances.