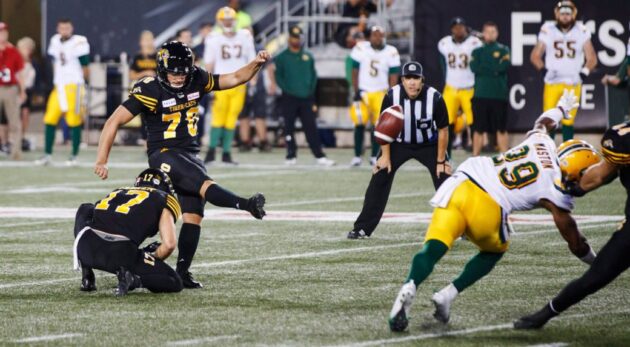 The Los Angeles Rams will reportedly sign former CFL kicker Lirim Hajrullahu. Details of the contract have yet to be revealed, but was reported by NFL Network’s Tom Pelissero.

The saga to replace former Rams kicker Greg Zuerlein may have ended with this signing. Hajrullahu may have came from the CFL, but his stats are impressive. Hajrullahu has quite the leg on him too, having a career long of 56-yards. Accuracy isn’t too shabby either nailing 83 percent of his field goals. Last season with the Hamilton Tiger-Cats, he made 47/55 field goals, which translates to about 85.5 percent.

It’s undeniable the success that Hajrullahu seen in the CFL, but the NFL is an entirely different league. It will be interesting to see if he can see similar success with the Rams. Another interesting bonus in signing Hajrullahu is his punting skills too. So if Johnny Hekker needs to miss some time, Hajrullahu could potentially replace him.

It’s unclear if the Rams will roll with Hajrullahu or have him compete with other kickers, but he isn’t a bad option. Considering the cap space though, the Rams probably couldn’t sign too many more kickers to compete.