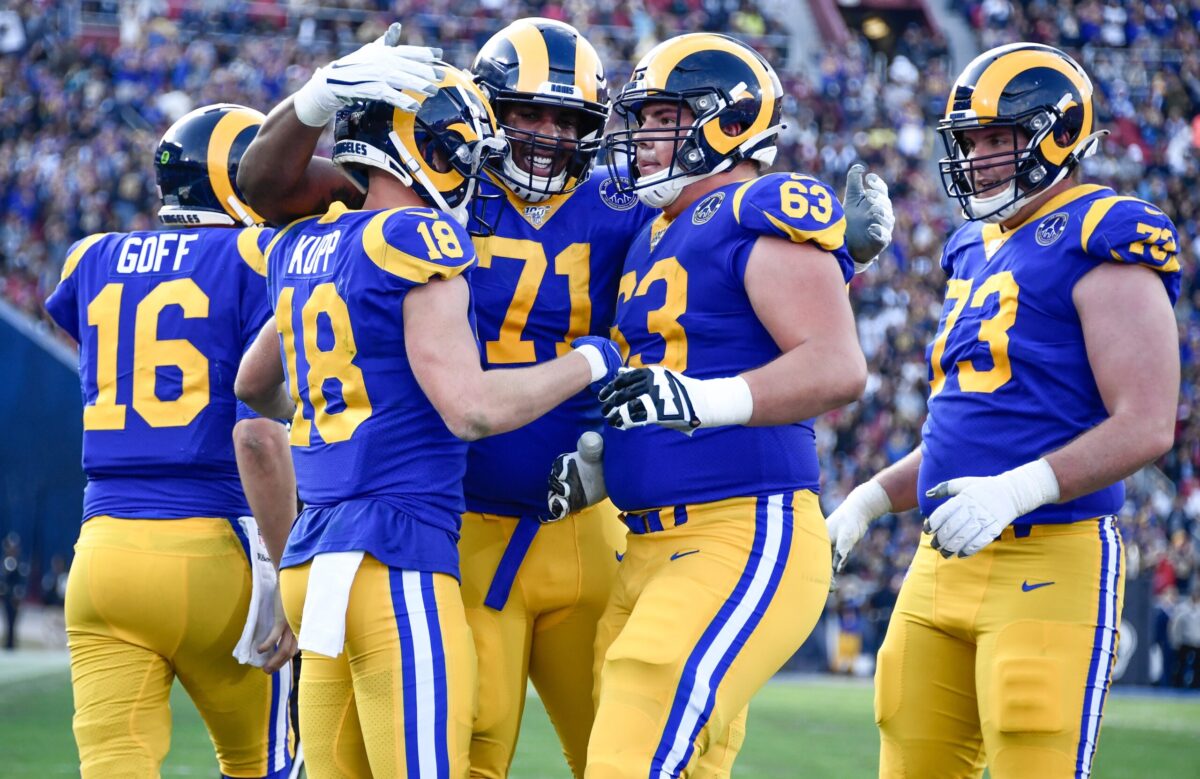 The Los Angeles Rams addressed some positions during the 2021 NFL Draft and even a little with some undrafted free agents. Here’s a positional preview to the Rams’ 2021 season:

Not a whole lot to examine here. We already know that Matthew Stafford will be the starter heading into the season. Kind of odd to say that since Jared Goff was the starter for so long. Even behind Stafford is set.

The only question is if the Rams plan to carry two or three QBs. The Rams have ran with two QBs in recent years. The Rams did have some injury issues last season though. This may convince them to run with three, although that’s doubtful.

Currently, John Wolford, Devlin Hodges and Bryce Perkins are listed on the roster. The fact that the Rams didn’t even make an attempt to add an undrafted free agent for a camp body suggests that the Rams are content with their depth. Barring Wolford has a huge drop-off or injury, we can expect him to be the immediate backup QB in 2021.

Nothing really shocking here either. Cam Akers and Darrell Henderson will be the one-two punch. The only question becomes how much workload will Akers receive? Toward the end of the 2020 season, Akers showed he can handle a full workload. Then again, Henderson is a great option too when healthy. The Rams need reliable backups because both struggled with injuries last season.

The Rams were confident in Xavier Jones, a 2020 undrafted free agent. Beyond Jones, the Rams don’t really have anyone else that would seriously challenge Jones’s spot. There’s Raymond Calais, but he’s been thought to be used more as a return specialist. Even that’s questionable since the Rams opted to use Cooper Kupp on most punt returns. That leaves rookie Jake Funk. The Rams appear to be more willing to use him on special teams than anything. He did have success on the ground while at Maryland though.

The Rams normally run with five receivers, but the addition of Stafford may change a few things. The first five are simple: Kupp, Robert Woods, Van Jefferson, DeSean Jackson and rookie Tutu Atwell. Beyond that could become a little challenging with this stacked corps of receivers.

Trishton Jackson was another undrafted free agent the Rams really liked last season. But there’s no guarantee he makes the roster this year. He will be competing with rookie Ben Skowronek for the final spot. But they aren’t the only ones. Nsimba Webster, J.J. Koski and the newly acquired undrafted free agents Jeremiah Haydel and Landen Akers are all fighting for a spot that may or may not be available. That said, we can expect some of these guys to reach the practice squad.

Even with the loss of Gerald Everett, the Rams are absolutely stacked at tight end courtesy of general manager Les Snead and the NFL Draft. Tyler Higbee will be the for sure starter. The Rams also agreed to a recent contract with Johnny Mundt, and he will likely be used for blocking purposes. Beyond that, it’s a battle.

The Rams ran with four tight ends last season with Brycen Hopkins essentially taking a “red shirt” year. Hopkins does not have a guaranteed spot, especially with all of the additions. Jacob Harris has a ton of potential. There’s still Kendall Blanton too. The Rams could try and move Hopkins or Harris to the practice squad, but teams could easily swoop in and pick them up. This will be a position battle to watch in training camp.

Many thought the Rams would address the offensive line in the NFL Draft, but that didn’t happen. The Rams did add a few undrafted free agents, but the offensive line is pretty much the same with the addition of Chandler Brewer (Sat out the 2020 season due to COVID-19 concerns) and minus Austin Blythe.

So we can expect Andrew Whitworth and Rob Havenstein as our starters with Bobby Evans as an immediate backup. Tremayne Anchrum and undrafted free agent Alaric Jackson will have to compete for a spot or could end up on the practice squad.

This is where things get a little dicey. So if we go by last season, our starting guards are Austin Corbett and David Edwards (At least at the end of the season.). However, the Rams could ask Corbett to slide over to center since Blythe left. That would mean Joseph Noteboom would become the starter.

That leaves the Rams with a depth of Brewer and Jamil Demby. They could ask recently signed Italian offensive tackle Max Pircher to move to guard. But the way head coach Sean McVay operates, there are plenty of offensive linemen that wiill cross-train. For example, Noteboom is listed as a guard but stepped in for the injured Whitworth at left tackle.

Without a doubt the biggest question heading into training camp is who will be the starting center? Brian Allen is a true center, but struggled mightily in 2019 before Blyhe took the starting role. The only other “true” center left is Coleman Shelton. The Rams are asking for undrafted free agent Jordan Meredith to compete as a center too.

If I guessed what’s going to happen, the Rams will likely move Corbett to center. They will have Allen prepped and ready to take over the position should Corbett need to move back over to guard due to injuries or if Corbett is better suited at guard. He did struggle at center while playing for the Cleveland Browns.

All of this said, the Rams are in good shape offensively. Really, the biggest concern is at center. Everything else is position battles. Offensive line depth is thin, but every other position is stacked. The Rams may not be perfect, but there is a sense confidence entering the 2021 season. This is of course if the starters can stay healthy. That’s where a panic button will need to be found.