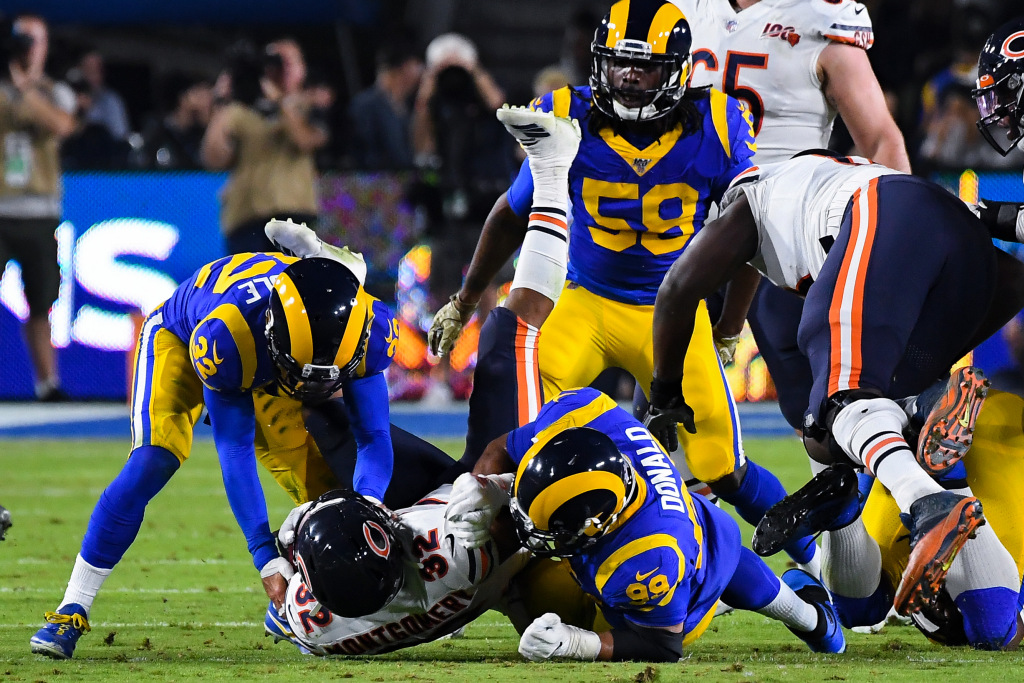 The Los Angeles Rams concluded their preseason after a 12-17 loss to the Denver Broncos. Head coach Sean McVay now prepares to start the season facing a slightly re-tooled Chicago Bears offense. Veteran quarterback Andy Dalton will take the helm after the Bears released Mitchell Trubisky in the offseason. The Rams too are running with a new QB in Matthew Stafford.

Although the preseason has no real stats, the Rams can still get a taste of Dalton’s potential after his 73-yard touchdown pass against the Buffalo Bills. Dalton had 216 passes for 2,170 yards and 14 touchdowns in 2020 for the Dallas Cowboys. He filled in for an injured Dak Prescott after Week 5. His Chicago preseason stats are 13 passes for 164 yards with one touchdown and one interception. Rookie Justin Fields and Nick Foles played for most of the preseason.

Chicago drafted Fields this year out of Ohio State. Fields had an impressive preseason, throwing for a total of 30 passes for 276 yards and three touchdowns with no interceptions. He added 96 rushing yards too. While the Bears may have mentioned Dalton as their starter, McVay and the Rams are also prepping for Fields too.

The Rams had a less than desirable showing in the preseason finishing 0-3. No starters saw the field, so that partially explains the record.

The defensive backfield will look a little different with a green dot now on Jordan Fuller. Safety John Johnson and cornerback Troy Hill are now with the Cleveland Browns. Fuller will join Taylor Rapp as the starting safeties. Cornerbacks Jalen Ramsey and Darious Williams complete the starting secondary. Look for Ramsey to shadow Bears receiver Allen Robinson. Robinson had 102 catches for 1,250 yards and six touchdowns in 2020. Other offensive aerial threats the Rams need to watch are tight ends Cole Kmet and Jimmy Graham. While they may not consistently put up big numbers, they can do damage and expose the Rams’ defensive weakness at inside linebacker. Both Kenny Young and Troy Reeder are returning as the starters in 2021.

The Rams defense will face much of the same Bears offensive line. Newly appointed defensive coordinator Raheem Morris is looking to make a big impact with a star-studded defensive front. Look for star defensive tackle Aaron Donald and EDGE Leonard Floyd to wreak havoc on Dalton. With longtime Rams defensive end Michael Brockers now in Detroit, the D-line will make A’Shawn Robinson the new starter to stuff the run. L.A. will need to disrupt the line to throw off the Bears’ rushing leader, David Montgomery who tallied 1,070 yards, eight rushing touchdowns and two receiving touchdowns in 2020.

The Rams offense is poised to have a great season given their numerous weapons. Look for Stafford to connect with receivers Cooper Kupp, Robert Woods and DeSean Jackson. Jackson provides more of a deep-threat option for Stafford’s long ball. Kupp and Woods should prove reliable as per usual. The Rams tight end corps of Tyler Higbee, Johnny Mundt, Jacob Harris and Brycen Hopkins will also be ready to make plays and add to the loaded offense.

Stafford comes into the Rams offense after throwing 339 passes for 4,084 yards and 26 touchdowns in 2020. It helps to be deep at the receiver position with Van Jefferson, Tutu Atwell and Ben Skowronek at the ready to prove themselves too. Woods and Kupp both tallied over 1,800 total yards along with nine total receiving touchdowns last season. Woods also rushed for 155 yards and two touchdowns. Jackson’s last full season was with the Washington Redskins in 2016 where he started in 15 games. Injuries plagued him throughout the last few seasons with the Eagles, but the 34-year-old veteran in his 14th season brings skill, speed and experience to match Stafford.

Chicago still boasts its favorite edge rusher Khalil Mack and defensive lineman Robert Quinn. Mack had 50 tackles, nine sacks and 13 quarterback hits. Quinn had two sacks and 20 tackles. Quinn is a familiar foe to the Rams as he is also a former teammate that played alongside Donald. Stafford will have to keep his head on a swivel but will have plenty of options to dump off the ball.

The Rams rushing department had a huge blow losing slated starter Cam Akers for the season. Akers suffered an Achilles injury in July. The then-rookie had a team-best 145 carries for 625 yards and two rushing touchdowns in 2020. Darrell Henderson will replace Akers as the starter after a solid rushing season with 138 carries for 624 yards and five touchdowns last year. The Rams also acquired Sony Michel from the New England Patriots. In 2020, he had an abbreviated season due to a knee injury, but still rushed for 449 yards on 79 carries and one touchdown. Michel will be a good power back for short yardage, complimenting Henderson’s long yardage potential. He is also a strong replacement for longtime running back Malcolm Brown who went to the Miami Dolphins in the offseason.

The Rams offensive line will still have captain and veteran Andrew Whitworth and Rob Havenstein at left and right tackles, respectively.  Right guard Austin Corbett will not be switching to center, leaving that position for Brian Allen. David Edwards will continue to serve as the left guard.

The last time the Bears and Rams squared off, the Rams won 24-10 with a good rushing attack and short passes in the end zone. Look for Stafford and Jackson to make their mark and all the veteran players to give the fans at SoFi Stadium a great season opener.