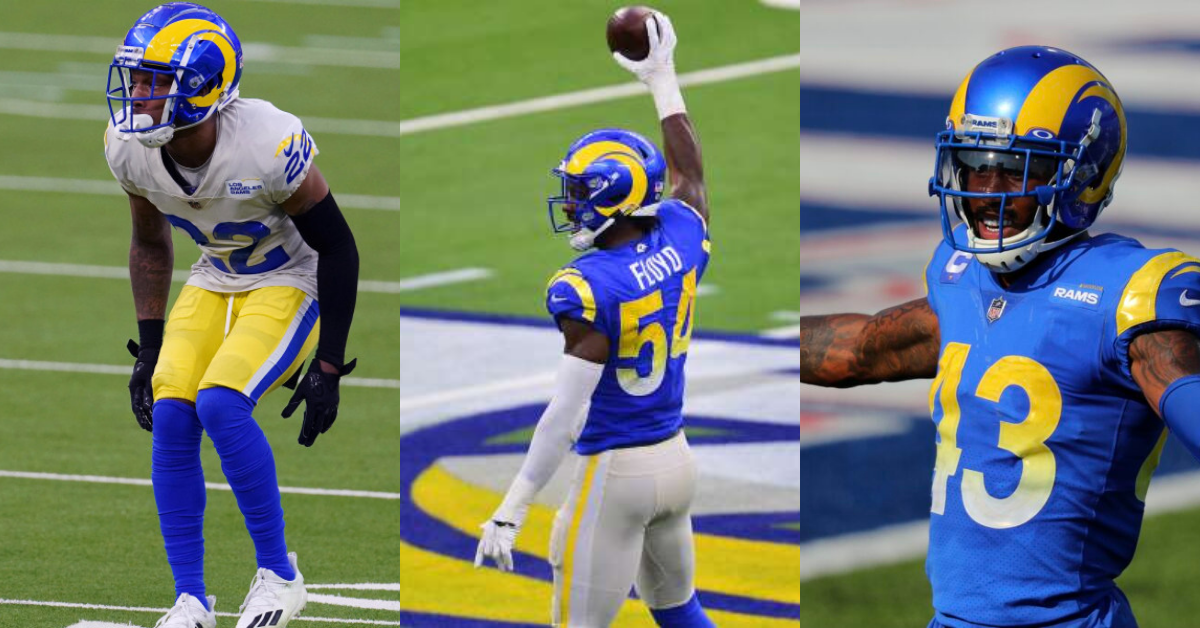 Welp, it’s finally the offseason, and that means looking ahead toward free agency. As we’re all aware, the Rams’ figurative salary cap well is bone-dry. This of course means that some key guys will likely be gone in 2021.

Some contracts were actually taken care of during the middle of the season like Jalen Ramsey, Cooper Kupp and Robert Woods. Those are some of the biggest names on the team. So that must mean that the rest of the free agents aren’t reputable players, right? Well, not exactly.

Immediately when we think of free agency, Johnson comes to mind. He’s easily the Rams’ best free agent and will likely not be back, as hard as it is to say that. Johnson is going to command a premiere contract and he certainly deserves it. But why not bring him back?

Other than the glaring cap space availability, the Rams have had a history of letting their top safeties walk. The reality is that the Rams still have Taylor Rapp and Jordan Fuller. General manager Les Snead is undoubtedly an expert and scouting safeties. Look for other teams to swipe him up as a prized free agent addition.

Wow, ironic how the Rams are in the exact same position as they were last season with Dante Fowler. Floyd came to the Rams as a relatively unknown. In fact, many Bears fans dubbed him a bust since he really didn’t live up to his potential in Chicago.

Floyd finished the 2020 season with 55 total tackles, 10.5 sacks, 11 tackles for a loss and two fumble recoveries. Remarkable improvement, but I’m afraid that’s where the good news ends. EDGE rushers are highly coveted in the modern NFL, and like Fowler, teams will throw big money at him. It’s not looking promising to have Floyd back for 2021.

The hype surrounding Hill in the beginning of 2020 was ridiculous. Hill actually struggled in the beginning of the season, primarily due to playing out of position. Hill shouldn’t worry too much about his value, he more than made up for it toward the end of the year.

While Hill had an admirable 77 tackles, the big story on him is his playmaking ability finishing with three interceptions, two of which were pick-sixes and one fumble recovery for a touchdown. That’s exactly what cornerback-hungry NFL teams are looking for. The value of quality corners are shooting through the roof, so I’d be surprised to see Hill back next season.

Blythe came back on a 1-year, $4 million contract. Blythe did about the same as 2019, possibly slightly better, so I’m not sure if teams will be exactly beating down the door to sign him. That said, it would likely be in the Rams’ best interest to bring him back in 2021. He should come back for about the same price, but the Rams will need to decide how long to bring back Blythe. He isn’t a long-term solution, but the Rams’ limited cap space will likely hamper the team’s options of upgrading him. Quite frankly, to expect a rookie to come in and do a better job than Blythe right away is unrealistic.

Looking back at the 2018 and 2019 seasons, Reynolds really began making a name for himself. His modest success followed him early in 2020, but faded as the season went on. Some dropped passes recently really didn’t up his value. Still, he has 618 yards and two touchdowns, which are solid numbers playing behind Kupp and Woods.

The question isn’t so much if the Rams could afford Reynolds as it is should the Rams bring him back? They recently drafted Van Jefferson who looked promising in his rookie season. And the cap space being what it is, Reynolds is a luxury that the Rams will have to pass on.

In 2018, Ebukam had a promising season. Since then, he’s made some big plays in critical moments, but disappeared in much of the season. However, the Rams are likely losing Floyd so they may need to hold on to Ebukam for at least one more season. It’s doubtful he will cost much, but if teams are breaking the bank, probably best to let him walk. It’s clear that OLB will be a huge position of need in 2021.

If there was ever an underrated signing in 2020 it was bringing back Fox. He played a limited role and still managed to get six sacks. There are starters in the NFL that don’t get that many sacks. It’s hard to say what Fox’s market will command, but if he’s affordable, I’m all for bringing back Fox for 2021 and beyond.

Funny, I recall when the thought of losing Everett might feel like a huge blow to the offense. To be honest, the tight ends this season weren’t utilized well. Everett clearly has some talent, but he was flat out frustrating at times due to dropped passes. The Rams could try to bring him back, but he’s an unnecessary luxury at this point. Let’s not forget that the Rams drafted Brycen Hopkins in the 2020 NFL Draft.

It was thought that Brown would be our third-down back, but that didn’t happen much at all. In reality, Brown was lost in the fold between Darrell Henderson and Cam Akers. Brown coming back wouldn’t be a terrible decision, but it may be time to move on and focus on Henderson and Akers. Perhaps the Rams can look at some undrafted free agents or lower round draft picks for a power running back.

Don’t laugh but this may be a crucial signing. McQuaide is one of the longest tenured players on the Rams and for a good reason. He does his job as a long snapper and does it well. Last time the Rams let go of a good special teamer, the Rams spent half the season to find his replacement. *Cough Greg Zuerlein.*

The Rams found out the importance of having a good backup QB. John Wolford is a good backup. Bortles is great on the practice squad, but not much else.

Late addition and provided depth. I wouldn’t oppose a training camp invite since Rivers was familiarizing himself with the defense.

It’s great that the Rams have Williams as a restricted free agent. With Hill likely gone, the Rams will need to tender Williams to keep him on an affordable contract. Williams truly stepped up and was a major factor in the Rams having the best defense in 2020. Williams finished the season with 44 tackles, four interceptions and 14 pass deflections.

Every team needs a blocking tight end and Mundt did a solid job. Shouldn’t be much to bring him back so I would be surprised if the Rams opt to cut ties with him.

One of the more devastating injuries of the season happened before the regular season began. Howard was reportedly dominating in practice and was coming off an intriguing 2019 season. Howard was supposed to start alongside Micah Kiser, but suffered a torn meniscus, which ended his season. The Rams should absolutely bring him back, especially if they keep a similar defensive scheme.

Shelton was a surprise addition to the active roster. He didn’t really contribute much, but I believe it couldn’t hurt to bring him back to compete for a roster spot in 2021.