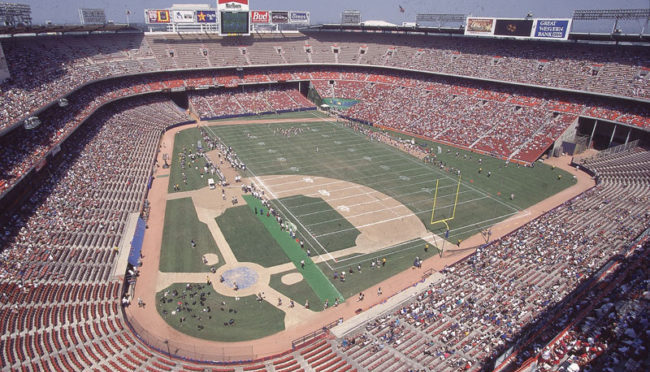 The Los Angeles Rams first moved to St. Louis in 1995. The move was a culmination of franchises trading owners, teams moving to suburban venues, and a mismanagement and lack of foresight by the Rams upper management, all culminating in the team’s relocation to the Gateway City. This is part 1 of our series looking back at what happened in the two decades prior to the Rams’ move.

In 1972, Carroll Rosenbloom owned the Baltimore Colts, and Robert Irsay purchased the Rams from the Reeves family. Rosenbloom and Irsay then did something unheard of in sports: they traded franchises instead of players. Irsay took ownership of the Colts, and Rosenbloom became the owner of the Rams. Twelve years later, Irsay brought in the Mayflower trucks and moved the Colts to Indianapolis in a still painful moment in Baltimore sports history.

The franchise enjoyed great success on the field during Rosenbloom’s tenure as the owner of the Los Angeles Rams. The Rams won the NFC West for a then-NFL record seven straight season (1973-1979) and earned a trip to Super Bowl XIV. The team was entertaining to watch on the field, but the team’s stadium situation was dire.

The Los Angeles Memorial Coliseum was 50 years old at the time Rosenbloom purchased the team. At the time, capacity at the L.A. Coliseum sat at just above 94,000 (reduced to 92,000 by 1979). The aging venue lacked any of the modern amenities, including luxury boxes, that NFL stadiums were beginning to feature.

Amid sagging attendance, Rosenbloom made a deal with the city of Anaheim expaning Anaheim Stadium to accommodate the Rams. In its expanded layout, Anaheim Stadium would hold just a little bit more than 65,000, which in theory would make it easier to sell out the venue, given the NFL’s T.V blackout policy. According to the policy, games in the market would not be televised locally if the team failed to sell out its home game 72 hours prior to kick off.

The team retained its “Los Angeles” moniker, but it the city after the 1979 season. Despite the Rams moving only 30 miles to Orange County, a large chunk of the fanbase left the team as well.

Anaheim Stadium proved to be an awful place to watch NFL games. The city of Anaheim built the stadium as a baseball venue originally. The sight-lines were distant and obstructed. Many of the seats were pointed in the wrong direction, and the late summer and early fall heat caused by the Santa Ana winds provided a poor fan experience. As the years went on, attendance sagged even further as a result. The California Angels also successfully sued the city and the Rams to stop promised development in the area. Nine years later, talks took place between the team and the L.A. Coliseum to return the old venue. Overall, this move spelled disaster for the franchise in the Los Angeles market.

The impact of the Rams leaving the city of Los Angeles and relocating first to Anaheim began a domino effect that later impacted other NFL cities that reverberate even today. Look for more on that as we progress through this series on the Rams’ relocation.