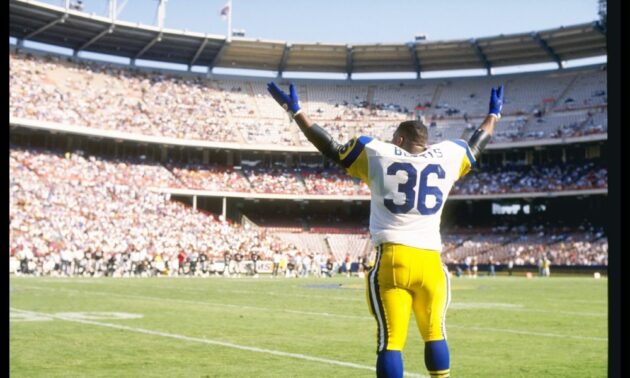 Throughout its franchise history, there were several former players that played well for the Los Angeles Rams and left to other teams. To some fans, it seems they left too soon, making a great career for themselves after the Rams. Some players went on to win championships, and others broke league records. Some spent a short time with the Rams. One thing is for sure, the Rams organization and fans alike wish these players could have brought that same success during their tenure to L.A. or St. Louis. Below is a list of some memorable former Rams that improved their NFL careers once they left.

Lane had a short stint with the Rams but made a huge impact on the franchise and the league. He had a record 14 interceptions as a rookie DB in 1952. He also earned 298 interception yards. The interception record still stands which is massively impressive given that he played NFL football in a bygone era. Two of his interceptions that year were touchdowns and one was for 80 yards. He also recorded one safety. In 1953, Lane scored on a fumble recovery and had a blocked field goal return for a touchdown.

In a questionable move by Rams head coach Hampton Pool, Lane was traded to the Chicago Cardinals in 1954 where he spent six seasons. In his first year in Chicago, Lane led the defense with ten interceptions, 181 interception yards with a long of 64. By the end of his time with the Cardinals, he had 30 interceptions for 628 yards and two touchdowns. He also played receiver on occasion and recorded the second longest touchdown pass in NFL history for 98 yards in 1955. In 1960, he was traded to the Detroit Lions and Lane established himself as one of the toughest tacklers in league history.

Lane was made famous by his “Night Train Necktie” tackle, that was eventually banned by the NFL. It is the modern clothesline tackle that also creates the common face masking penalty today.  In a 1961 matchup with his former team, Lane gave a “necktie” to Rams running back John Arnett. Arnett was motionless on the ground for some time. He never forgot that tackle. While with the Lions, Lane had 21 interceptions for 272 yards and one touchdown. In 1960, he also recorded his second 80-yard interception return for a touchdown. It was the final score to cap a 30-17 win against the great Johnny Unitas and the Baltimore Colts.

Lane is fourth all-time in the league with 68 interceptions. He was also a seven-time Pro Bowl selection between 1954 and 1962. Although he never won an NFL championship, he completed an extraordinarily successful 14-year NFL career and was inducted into the Pro Football Hall of Fame in 1974. Lane may have the Rams to thank for his successful start, but once he left, he continued to gain fame and notoriety as one of the NFL’s greatest corners.

Wade was the No. 1 overall pick in 1952 NFL Draft out of Vanderbilt. After serving two years in the U.S. Navy, Wade backed up Rams quarterback Norm Van Brocklin in 1954. During his seven seasons with the Rams, Wade earned 603 completions for 8,572 yards and 56 touchdowns. He also had 159 carries for 687 yards and 10 touchdowns. Wade did see an NFL Championship game against the Cleveland Browns in 1955, but the Rams lost 38-14. Still backing up Van Brocklin during the championship, he did not play much.

Wade’s last year as a Ram came in 1958 and as a newly minted starting quarterback. Wade racked up 2,875 yards and 18 touchdowns. He still did not see the playoffs that season, but he earned a trip to the Pro Bowl.

The Rams traded Wade to the Chicago Bears in 1961. His career took a meteoric rise with the Bears. He had 139 passes for 2,258 yards and a career-high 22 touchdowns in his first season. The following year, he had a career-high 225 completions on 412 passing attempts for 3,172 yards with 18 touchdowns. In his third season with the Bears, Wade led Chicago to an 11-1-2 record and their 1963 NFL Championship. He scored both rushing touchdowns in their 14-10 victory over the New York Giants.  He also earned a Pro Bowl trip that year. During his tenure with the Bears, Wade tallied 767 passes for 9,958 yards and 68 touchdowns in six seasons.  He also had 159 carries (identical to his time on the Rams) for 647 yards and 14 touchdowns.

Wade finished his NFL career with 18,530 yards and 124 touchdowns. The Rams gave him a great opportunity once he filled the starting role. He accomplished a lot in his time in L.A., but the move to Chicago propelled him to greatness.

Bettis was a fan favorite in the era of the Rams’ mid-90s slump. The Notre Dame alum was drafted by the Rams in 1993 and earned a reputation of a powerhouse, stout running back. Nicknamed the Battering Ram, he was the NFL AP Offensive Rookie of the Year and a part of the 1993 NFL All-Rookie Team. While with the Rams, Bettis earned 796 carries for 3,091 yards and 13 touchdowns. He had his third-highest career rushing yards in a season in his rookie year with 1,429. He also had the longest league rush that year for 71 yards.

It would be amazing to see what Bettis could have done had he remained a Ram for most of his career. Unfortunately, Bettis was traded to the Steelers after the Rams’ inaugural 1995 season in St. Louis. It was a position re-assignment disagreement that contributed to his departure to the Steelers. Rams head coach Chuck Knox wanted to make him a fullback and put rookie draft pick Lawrence Phillips at tailback. Bettis said no thank you to the fullback role, so Pittsburgh scooped him up in a trade for a second-round draft pick that year and a fourth rounder in 1997. Phillips, the former Nebraska star running back, lasted only two trouble-laden seasons. Losing Bettis was a trade deal that would haunt the Rams until the arrival of Marshall Faulk, Kurt Warner and the Greatest Show on Turf.

Bettis became the unlikely accidental Steeler that rose to superstardom. He saw his second-highest career rushing yards in his first season with the Pittsburgh Steelers. He had 320 carries for 1,431 yards and 11 touchdowns. In his first matchup against the Rams, Bettis felt he had something to prove. He scored the first two touchdowns, including a 50-yard run, giving the Steelers a 14-0 lead.  Pittsburgh won 42-6 against his former team.

The following year, he had a career-high 375 carries for 1,665 yards.  He also tallied seven touchdowns. Bettis had six-straight seasons of over 1,000 yards rushing from 1996-2001. He scored a career-high 13 touchdowns in 2004. The following year he capped off his NFL career with a Super Bowl win against the Seattle Seahawks. He was inducted into the Pro Football Hall of Fame in 2016.

Amendola was undrafted in 2008 and spent time on the Dallas Cowboys and Philadelphia Eagles practice squads. The Rams signed him in 2009. In his first year, he had 43 catches for 326 yards and one touchdown. He was the main kick returner where he tallied 1,618 yards. In 2010, he led the league in all-purpose yards with 2,364. He had a career-high 85 catches for 689 yards and scored three touchdowns. In his four seasons with the Rams, Amendola tallied 196 receptions for 1,726 yards and seven touchdowns.

He suffered two major injuries in his next two seasons. In 2011 he suffered a season-ending muscle tear in his arm in the season opener, requiring surgery. He also broke his collarbone the next season, causing him to miss three games. He had 63 catches for 666 yards and was on track to possibly get 100 catches that season. The Rams let Amendola go in free agency in 2013 and the Patriots picked him up.

During his five seasons in New England, he had 230 catches for 2,383 yards and 12 touchdowns. He was also a return specialist and had three 600-plus yard seasons, but never more than four touchdowns. Amendola did gain a reputation as a playoff savior. He scored a career six touchdowns during the playoffs and tallied 557 yards in 12 games. He also helped the Pats get to three Super Bowls. He has two championships under his belt for Super Bowl XLIX and Super Bowl LI.

Amendola left New England after taking pay cuts for three seasons to remain on the team. He went to the Miami Dolphins in 2018 for a more lucrative contract, but they cut him after one year.  The reason was they asked him to take pay cut. He then signed with the Detroit Lions in 2019 and recently re-signed for 2020. Last year, he had 62 catches for 678 yards and one touchdown.

Watkins may not have started with the Rams, but he arrived at a great time. The Rams had just rebuilt under new head coach Sean McVay and turned around from a 4-12 in 2016 to 11-5 the following season.

He began his career on the Buffalo Bills where he had much success. Throughout his tenure, Watkins had 153 catches for 2,459 yards and 17 touchdowns. He had a career-high 1,047 receiving yards and nine touchdowns in just 13 games in 2015.

His lone season on the Rams saw 39 catches for 593 yards and eight touchdowns. The Rams decided not to franchise tag him in the offseason and the Kansas City Chiefs picked him up in 2018.  We know where that took him in 2019.

In his two years with the Chiefs, Watkins has 92 catches for 1,192 yards and six touchdowns. He has a playoff touchdown in the 2020 AFC Championship against the Tennessee Titans as well.  During the Chiefs Super Bowl championship, Watkins caught a pivotal pass to set up a score.

He may have had a short time with the Rams, but the talent he brought to the team played a role in helping turn the Rams around to a winning franchise. The Rams also helped enhance his skills to propel him to a Super Bowl-winning team where he played a major role throughout the entire season and post-season. Watkins is not done yet, and the Chiefs are still a major challenge in 2020 with the best quarterback in football that can find his target.