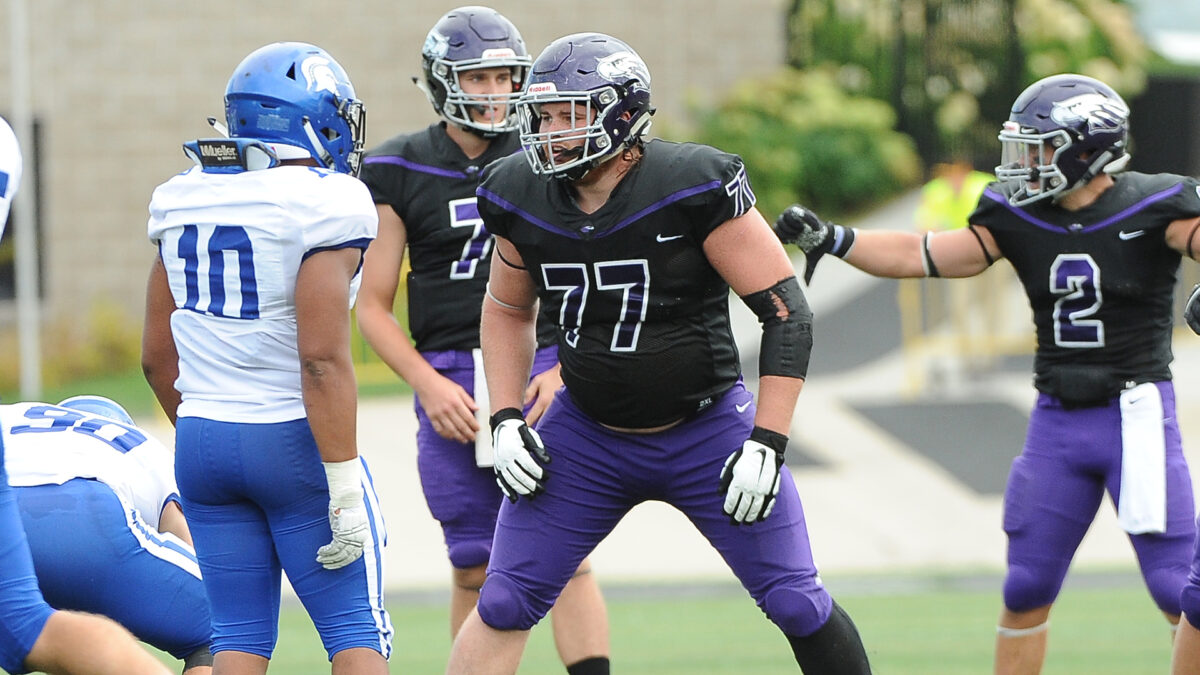 Now that the busy part of free agency has come and gone, the focus is shifting to the 2021 NFL Draft. The Los Angeles Rams don’t have too many needs, but one need that immediately comes to mind is center. This is especially relevant since 2020 starter Austin Blythe reportedly signed with the Kansas City Chiefs.

So what prospect would be a good fit for the Los Angeles Rams? Wisconsin-Whitewater’s Quinn Meinerz immediately comes to mind, especially since the Rams have met with him several times and even brought in offensive line coach Kevin Carberry to meet with him.

Meinerz is pure, raw power. He can bully defensive linemen to the ground and is technically conscious too, which isn’t that common. Works really well with his hands and utilizes every aspect of his strength. Meinerz has quite the motor and does not quit on plays and will use his athleticism to continue blocks downfield. This is especially intriguing for teams that run the ball often or have a deep playbook.

While Meinerz’s skills are noticeable, what really drove him up the draft boards is his performance in the Senior Bowl and recently during his Pro Day too. Keep in mind, Meinerz played in Division III, so for an interior lineman to have enough recognition to receive an invite to the Senior Bowl, especially after not playing 2020 due to COVID-19 concerns, that’s impressive.

The 6’3″, 320-pound lineman had some impressive Pro Day numbers too. Meinerz completed the three-cone drill in 7.33 seconds and the 40-yard dash in 4.86 seconds. For a man his size to have that kind of power and speed makes Meinerz a prospect every team will look at for their roster. It’s also intriguing that he can play center and guard.

While Meinerz seems like a dream prospect, and he is in many ways, he will need to work through plenty of adjustments. First off, the obvious concern is coming from a small school. The Warhawks didn’t see elite talent often. Clearly Meinerz needed to be challenged more. He shined through the Senior Bowl, which is great for his draft status, but he will see the best of the best on the next level.

There is also the matter of Meinerz playing with a learning curve since he exclusively played left guard his entire collegiate career. That’s a tough adjustment if teams decide to use him as a center. Footwork is definitely his biggest knock too. No matter the position on the offensive line, footwork is essential. Power is great, but patience is a necessity also. Being too eager can ruin plays on the next level.

This is tough to pinpoint since Meinerz climbed draft boards faster than just about any prospect. It really depends how much teams are willing to gamble or if they prefer to use him as a guard or center. If teams will attempt to use him as a guard, that will improve his odds being drafted higher. Realistically though, I see Meinerz as a Day 2 prospect. A third round selection at the absolute latest.

Meinerz has all the tools to being a quality offensive linemen. The Rams could certainly use him to potentially replace Blythe. That being said, I don’t know if I’d want to use pick 57 on him. He’s a project player at center and you’d like to receive a starter if possible in the second round.

That said, if he’s still available at pick 88 or preferably pick 141 in the third round, I’d be a much more confident buyer. The hype that now surrounds Meinerz may not make that possible though. Still, we have seen “risers” drop much lower than expected. A good example is Houston’s OT Josh Jones since he was projected to be a late first round pick and didn’t get selected until 72nd overall in the third round. Doubt that happens with Meinerz, but you never know.