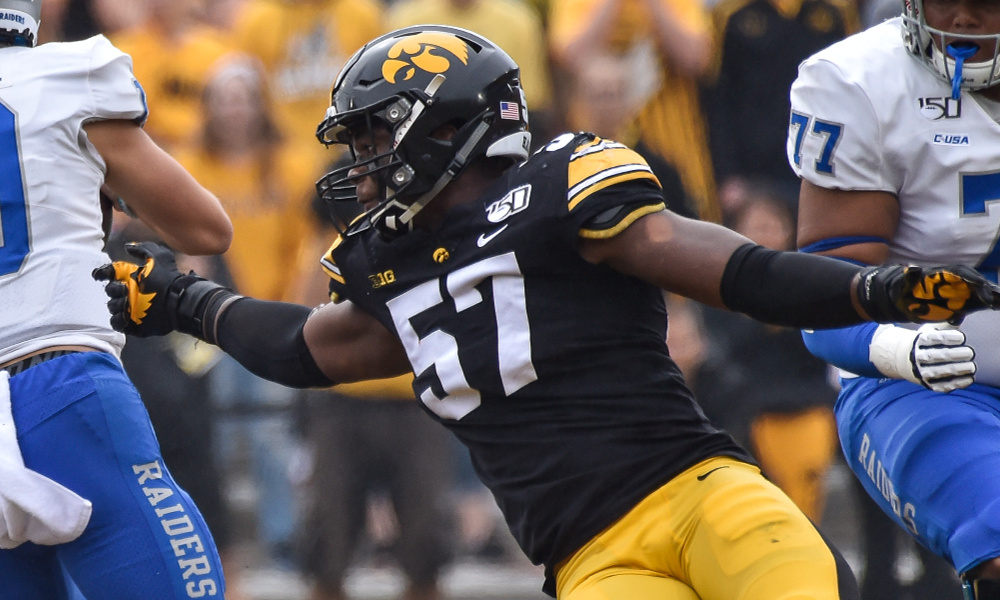 Hard to believe that the Los Angeles Rams need to look for help on the defensive line. To be fair, a starter isn’t really necessary. The Rams can easily roll with Sebastian Joseph-Day, A’Shawn Robinson and Aaron Donald as the starters. Depth is lacking with the departures of Michael Brockers and Morgan Fox. The Rams could add a low-cost veteran via free agency.

Even if the Rams seek depth through free agency, that’s just a band-aid at best. It would be nice to add a younger guy that can learn from guys like Donald and be placed in situationally. Here’s where Iowa EDGE Chauncey Golston might come in. He did score a pre-draft visit with the Rams, but is he a good fit?

Golston’s development throughout his collegiate career is impressive. He left his senior season on a high note and decent stats to match. This essentially tells us that he’s a fast learner and can be a student to the game. He’s patient than most prospects, which is what makes him particularly intriguing against the run.

The selling point for Golston is his size and frame. At 6’5″ and 269 pounds, that’s a decent size for a DE. He utilizes his long arms and excellent hand placement to gain the advantage of offensive linemen. His upper body strength truly aids him in battles at the scrimmage, which is difficult to find.

Finding a true position for Golston, other than situational schemes, will prove to be challenging. Golston has the skill level of an interior defensive linemen, but the body and frame of a defensive end. The problem with placing Golston at DE is that he’s just not explosive enough.

Golston is a competent tackler, but getting him there with his pass rush will be challenging on the next level. He plays too high and struggles to recover if initially beaten off the snap. Teams would really need to think creatively to use Golston in their future plans.

While there are some uncertainties with Golston, he will certainly be drafted. He will most likely be selected in Day 3, possibly as a sixth-round prospect. It wouldn’t be shocking though if a team enamored with him as a late-round prospect take him as high as the fifth round.

Depth is obviously something the Rams need at DE. A Day 3 pick isn’t a lot to ask for and could be a decent contributor as a special teamer if nothing else. I’d prefer the Rams to use pick 209 or 252, but it’s possible that he may not be there.