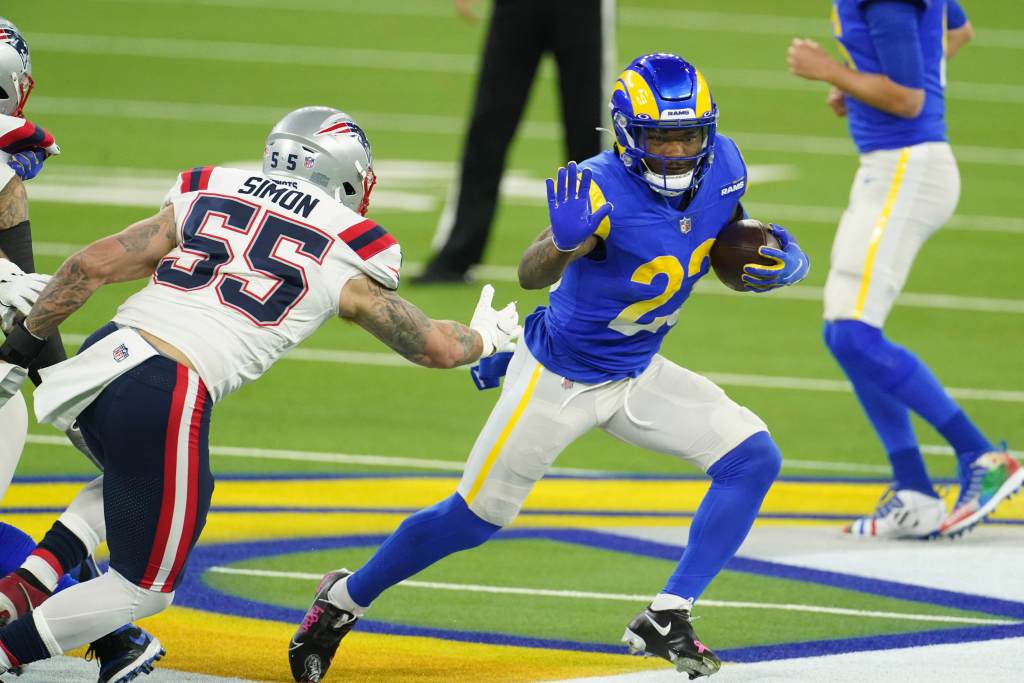 It’s easy to harken back on memories of Super Bowl LIII, six-straight losses to the six-time Super Bowl champions and relive memories of all those heartbreaking moments. But this is a new day, a new team, new philosophy, a more mature head coach and a new running back.

The Los Angeles Rams (9-4) will continue to lead the NFC West standings after dismantling Cam Newton and the New England Patriots (6-7) 24-3 at SoFi Stadium Thursday night.

Rookie RB Cam Akers blasted his way into the lead role of chief ball carrier with a 29-carry, 171-yard rushing performance, against a normally stout Bill Belichick defense. In a workman-like effort, Akers used several runs of seven to 11 yards, and a 35-yard run to amass the yardage, which makes this feat more admirable.

Akers negated the need to have quarterback Jared Goff (16-25, 137 yards, 1 TD, 1 INT) pass the ball around the yard on a short week. Goff also rushed for a TD for the second-straight week.

Belichick coming into the game probably wanted to force Goff to beat his team with his arm by stopping the Rams running game, that was not to be because Akers, who has showed signs of life since he returned from a rib injury, was ready to go despite not even knowing the level of use he was going to get Thursday night.

How did this happen? Why now?

The Rams employed at least 30 times in this game a two tight end set, which allowed for a better blocking scheme on running plays. Add that to the already impressive work the wide receivers do in the rushing attack and you get performances like this. It was a genius scheme by Sean McVay to throw off his counterparts’ defensive plan.
The return to a lead back is the most desirable option. Yes, the three-back option has worked and has paid dividends, but that was used because of necessity. Akers has clearly showed his explosiveness and proved that his surprise second-round pick this past offseason was the right choice for the Rams.

Defense gangs up on Newton

Turnabout is fair play. The last time these two teams met up, it was the Rams who were frustrated and scored just three points. This version of the Rams defense is simply remarkable. I can say that in 13 games, right?

First, thanks to Kenny Young, who had his best game as a Ram, his 79-yard interception return for a touchdown marked the third-straight game the unit has scored for the team.

Second, six sacks on Patriots quarterbacks. Newton was tagged four times and all of which came in the second half. It was a statement to the Patriots, this was one game they weren’t going to come from behind and win.

Third, the Rams watched New England enter the Rams’ red zone six times and only came away with three points. Newton who had 11 rushing TDs this season coming in and has now rushed for 451 yards on 113 carries, was stopped from the two-yard line, and quite frequently was harassed by the defensive line when it wasn’t sacking him. He had one carry for seven yards, and six other attempts for nine more yards. He was thoroughly wrapped up by L.A.

Fourth, New England had an eight-minute drive in the second quarter trailing 17-0. They had to score a TD and went for it on fourth down from the two-yard line. They failed to get in, and would later get their lone score in the same quarter. So instead of a 17-10 game at the half, for all intents and purposes that drive was the turning point in the game. The exclamation point came in the third quarter when the Rams engineered a 10-minute drive, scoring a TD, to take their 24-3 lead.

The Rams get a few extra days of rest before preparing to host the winless New York Jets. McVay was emphatic Thursday night in saying the team will not overlook a Jets team that is playing competitive close games this season.
Three games remain in the Rams regular season, where they are in search of their third West title in the last four years. The team has now assured themselves of their fourth-straight winning record under McVay, but it doesn’t mean anything if they can’t continue to play well during December and beyond.