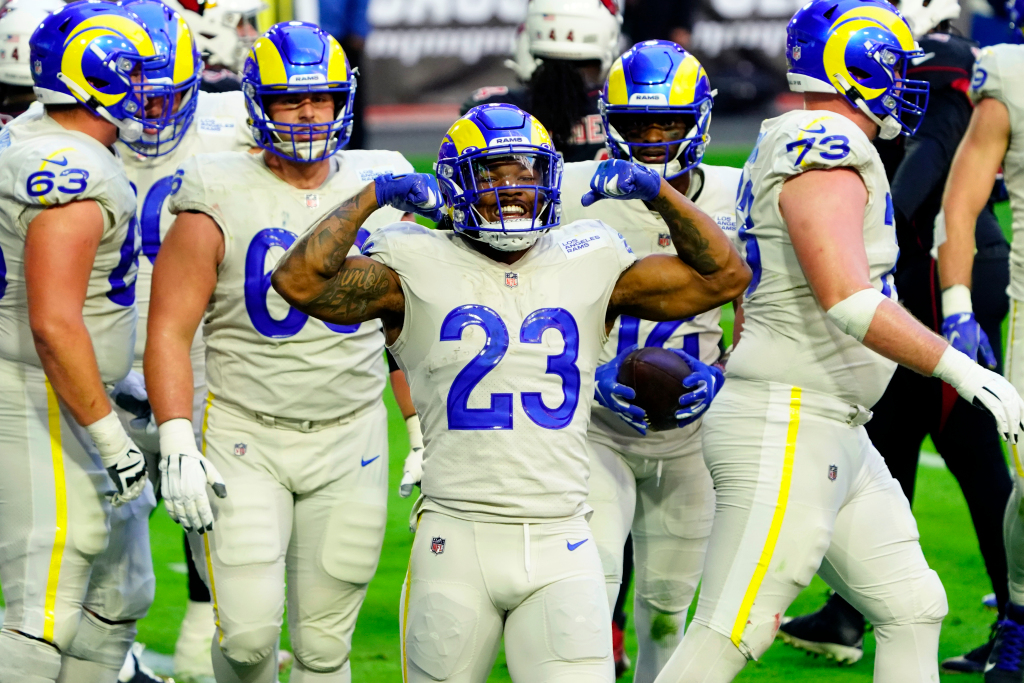 The Los Angeles Rams (8-4) are coming off a big 38-28 victory against the Arizona Cardinals (6-6), putting them in a tie for first place in the NFC West division. They have also given head coach Sean McVay his fourth winning season in a row since taking the reins in 2017. Now, they prepare for a short week turnaround against the New England Patriots (6-6) on Thursday Night Football.

The matchup will be heavily defensive on both sides as both will attempt a strong rushing attack. Pats quarterback Cam Newton leads the way with 11 rushing touchdowns where he is also tied for third in the league. The Rams running attack by committee may be hampered a bit with Cam Akers being questionable with a shoulder injury.  Running back Darrell Henderson may start and Malcolm Brown will be ready to go. Henderson leads the Rams in rushing with 123 carries for 559 yards and five touchdowns. He had his longest rushing score against the Cardinals for 38 yards. Brown has 90 carries for 368 yards and five touchdowns. He also had one catch for 30 yards against the Cards. Akers has 80 carries for 357 yards. He had his first three touchdowns in the last three games. Akers also had his longest rushing touchdown against Arizona for nine yards.

Newton is doing better in scoring on the ground than he is in the air. He has thrown 190 of 285 passes for 2,053 yards and five touchdowns for the season. In their blowout 45-0 win over the Los Angeles Chargers (3-9), he threw a paltry 12 of 19 passes for 69 yards and one touchdown. He also rushed for 48 yards and two touchdowns. Just to compare performances, Chargers quarterback Justin Herbert threw 26 of 53 passes for 209 yards.

Newton’s receiving weapons did not get much of a spotlight against the Chargers, but he hit N’Keal Harry for a 5-yard score in the end zone in the third quarter. Wide receiver Damiere Byrd leads the Patriots with 37 catches for 518 yards. He did not have a big showing against the Bolts. Jakobi Meyers will also be one for the Rams to watch.  Veteran receiver Julian Edelman is out on injured reserve due to a knee injury suffered in Week 7.

Damien Harris led in rushing against the Chargers with 16 carries for 80 yards. He leads with 126 carries for 641 yards for the season. The Rams defensive front will also face a familiar rusher in Sony Michel, as well as, James White. Fullback Rex Burkhead is out for the season with a torn ACL suffered in November.

The Rams offense still boasts a solid offensive line that gave quarterback Jared Goff decent protection against the Cardinals. Goff threw for 37 of 47 passes for 341 yards and one touchdown. He was able to hit tight end Tyler Higbee for a 1-yard touchdown. It was his first score since Week 2 where he had three touchdowns against the Philadelphia Eagles. Goff has completed 308 of 450 passes for 3,372 yards and 17 touchdowns this season. He continues to successfully spread the ball around and will need to continue this to have success against the Patriots defense.

Robert Woods led in receiving against Arizona with 10 catches for 85 yards. Cooper Kupp and tight end Gerald Everett had great numbers as well. Kupp had eight catches for 72 yards while Everett added six catches for 44 yards.  Van Jefferson and Josh Reynolds chipped in with a total of five catches for 48 yards.

On defense, L.A. continues to dominate, ranking second in the league. Cornerback Troy Hill came away with a pick-six on Arizona quarterback Kyler Murry. Murry was contained for much of the game.

Defensive tackle Aaron Donald got his eleventh sack of the season and disrupted the line throughout the game.  Inside linebacker Troy Reeder led with 10 tackles against the Cardinals. Safety John Johnson now leads the defense with 83 tackles.

Look for cornerback Jalen Ramsey, Hill and Darious Williams to match up on Byrd, Harry and Meyers. Whoever Ramsey covers most likely will not be targeted much, which has been the modus operandi of opposing quarterbacks in recent games. Receiver Gunner Olszewski and tight end Ryan Izzo will also be ones to watch. Olszewski had a huge special teams play on a punt return for a touchdown against the Chargers.

The Patriots special teams and defense will be the key in this battle. The Rams need to tighten up their special teams execution. Returner Nsimba Webster had a crucial fumble that set up good offensive field position late in the game for a Cardinals touchdown. Kicker Matt Gay made all of his extra-point kicks, but hit the left upright on his last field goal attempt.

The Rams want revenge against the Patriots. New England has beaten the Rams in their last two Super Bowl appearances, XXXVI and LVIII. Super Bowl LVIII loss sits fresh in the minds of fans and players alike, but both teams have a different makeup than before.

First, there is no Tom Brady at quarterback for the Pats. Second, there is no Rob Gronkowski at tight end. As mentioned earlier, Edelman and Burkhead are out with injuries.

The Rams also do not have several defensive players from that Super Bowl matchup. They also no longer have wide receiver Brandin Cooks or running back Todd Gurley. Cooper Kupp was not even a factor on the offense due to injury.

The one notch under their belt this season is that they already beat Brady and Gronkowski in Tampa. Much to their relief, that is one monkey off their back. Now it is on to a battle of the minds with Patriots head coach Bill Belichick.  Will the Rams be able to outmatch the veteran play schemer that has proven to shut them down? The Rams are favored to win but will need to step up their ground game, as well as, pressure Newton. With Newton’s big frame and running ability, that will not be an easy task.