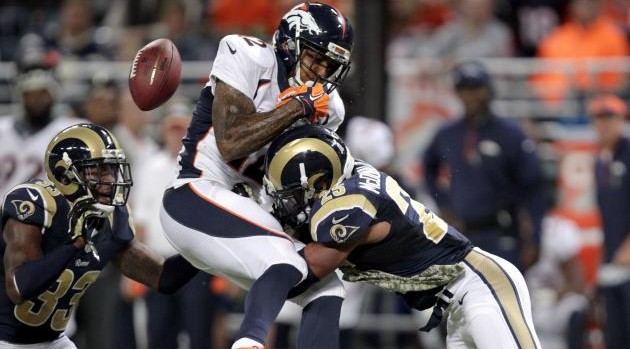 The unpredictable nature of the NFL didn’t disappoint fans during Week 11, especially in the NFC West. The Seattle Seahawks lost a heartbreaker to the Kansas City Chiefs in what was the only divisional loss. Meanwhile, the St. Louis Rams shocked the entire league with their dominant performance over the Denver Broncos, the San Francisco 49ers held on to defeat the New York Giants, and the question remains is what will it take for the Arizona Cardinals to lose? They defeated one of the best teams in the NFL in the Detroit Lions. Here’s a look at Week 12 to see if there might be anymore upsets:

St. Louis Rams @ San Diego Chargers: The young talent of the Rams finally showed itself last week against the Broncos. It’s too early to tell if the Rams can turn around their season, but it’s a possibility if they keep up their productivity. If you can take anything away from last week’s victory, it’s that quarterback Shaun Hill is a true leader. He took control of the game and everything just flowed smoothly. Even the offensive line blocked better than it had all season, which allowed rookie running back Tre Mason to eclipse over 100 yards rushing. One problem they still struggle with is red zone scoring. The Rams would have slaughtered the Broncos had they been able to reach the end zone.

The Chargers are actually similar to the Rams in the sense that they’re much better then what their record suggests. One alarming statistic that the Chargers possess is a 4-1 record at home, which could complicate the Rams’ attempt at a season turn around. The key will be to keep quarterback Phillip Rivers off the field. If Rivers can find his offensive weapons, this game belongs to the Chargers. I believe the Rams will keep up their momentum though.

Arizona Cardinals @ Seattle Seahawks: The Cardinals have many injuries to key players, yet they still find ways to win. Last week, they didn’t have an impressive offensive outing, which was to be expected without their starting quarterback and going up against one of the premier defenses in the league in the Lions. This week, they may face even more challenges to the offense since they will be entering the deafening stadium of CenturyLink Field. Arizona’s best chance of escaping Seattle with a victory will depend if running back Andre Ellington can establish a rhythm on the ground. The Seahawks struggled last week with Jamaal Charles surrendering 159 yards and two touchdowns.

It’s hard to imagine the Seahawks having a legitimate shot at earning a win over the Cardinals especially considering they just suffered a loss to the Chiefs. That said, Seattle finds themselves in a must-win situation since the 49ers gained some ground on them last week, and the Cardinals are solidifying themselves as the division leader each week. The key will be the defense forcing the Cardinals’ backup quarterback Drew Stanton to pass. Stanton does an adequate job as the interim quarterback, but he is prone to making mistakes. Another important factor is making sure that the Seahawks can drive the ball down the field with someone else other than Marshawn Lynch. This means Russell Wilson must extend drives, which may be challenging against the Cardinals’ elite secondary. Despite all of that, I smell an upset alert.

Washington Redskins @ San Francisco 49ers: The 49ers didn’t have an impressive win against the New York Giants last week, but in the NFL a win is a win. This week, their focus will be on a struggling Redskins team that reached a season low being dismantled by an absolutely horrendous Tampa Bay Buccaneers team. It’s easy to overlook a team like the Redskins, but that could be costly considering there are still threats on the team such as receiver DeSean Jackson. Jackson has turned games around when has the ball in his hands in an open field. I don’t see that happening with the 49ers, especially since linebacker Aldon Smith returned last week with a limited workload. If Smith is able to go with no limitations, it can be a painful Sunday for Robert Griffin III. Offensively, the Niners must be able to spread the ball out more. Quarterback Colin Kaepernick has talent around him, he must be able to get the ball out to players like Vernon Davis.