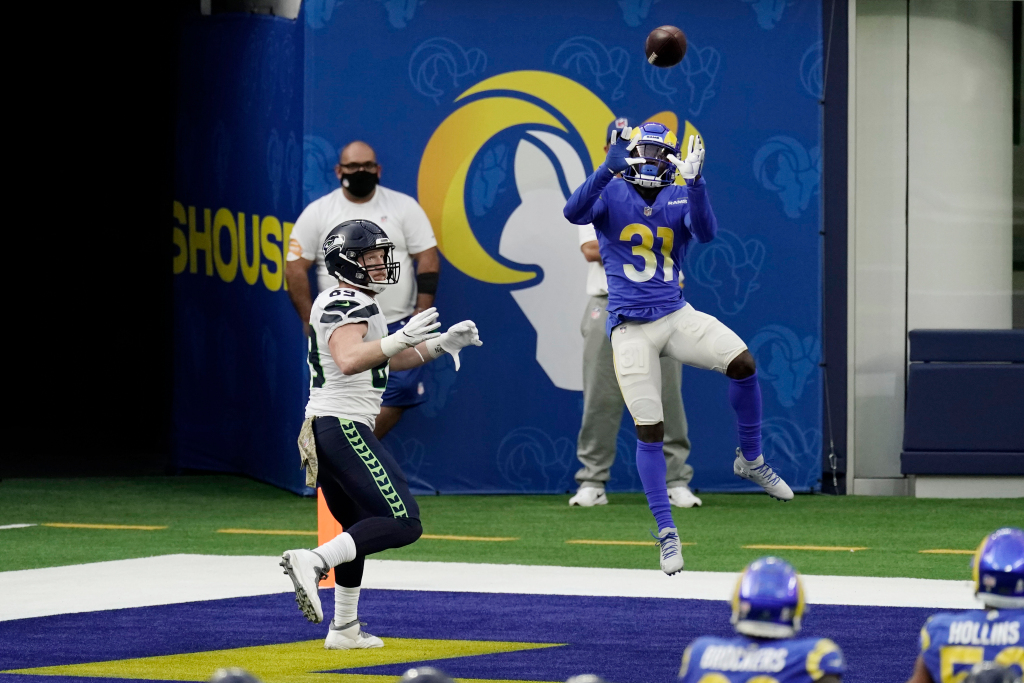 Now, this is the kind of win to smile about!

While not a perfect performance, it was good enough to stun the No. 1 rated offense in the league and force a three-way tie atop of the NFC West standings after Los Angeles defeated Seattle at SoFi Stadium, 23-16.

The Rams (6-3, 1-1 in division) were able to put together ferocious (I don’t use this word much) defensive effort, a more controlled offense with a running game and a well-coached game to defeat the Seahawks (6-3, 1-2 in division). Coupled with the Arizona Cardinals’ miraculous Hail Mary pass Sunday, the West has proven to all NFL fans it is truly the best division in the league, one that will be hard to win without getting bruised up. More on that later.

Speaking of bruised up, LT Andrew Whitworth could be lost for the season with reports PCL and MCL damage to his knee after colliding with a defender in the second quarter Sunday. There is a slim possibility he could return late in the regular season, but likely closer to the playoffs. His on-field presence will be missed. His personality will surely be in the camp as he will remain influential to the likes of Joseph Noteboom and an inspiration to the team to keep working and playing winning football.

Seahawks quarterback Russell Wilson, who is 7-10 against the Rams, was harassed so much in the game, he had to resort to his running abilities late in the game. He was sacked six times, three by Leonard Floyd and two by Terrell Lewis. Wilson was hit 12 times in the game and coughed up three turnovers, two through the air. That doesn’t even include a pick-six by Darious Williams that was overturned by a defensive offside call on Floyd.

Oops, did I fail to mention Williams picked off Wilson both times and both at the most opportune moments for the defense? Yeah, once again he proved to be a big-play maker in a big-game situation. His first real interception came two plays after the Whitworth injury and the subsequent strip sack of Jared Goff.

With the ball at the Rams’ 22, Wilson was looking for a receiver in the end zone, moving forward in the pocket, almost crossing the line of scrimmage and threw a one-footed pass, that was intercepted in the left corner of the end zone. It truly was a game rescuing moment when momentum was paramount.

The defense was able to come up with another solid second-half, giving up a mere three points to the Seahawks who average 34 points per game. Jalen Ramsey was a key ingredient as his much anticipated head-to-head matchup against the No. 1 receiver in the league was one-sided to say the least. DK Metcalf was only targeted four times, and didn’t catch his first pass until late in the third quarter.

Michael Brockers got the sixth sack of Wilson, and the team overcame a lackluster (or maybe he was just outmanned 3-1) performance by Aaron Donald who had just two hits on the quarterback. The team held Seattle to 361 total yards and Wilson to a 57 quarterback rating.

Goff delivered a playoff performance effort where his TD passes were not needed thanks in part to his running back-by-committee. Goff only missed on 10 passes for 302 yards and finished with a 96.9 QBR. Josh Reynolds was the big pass catcher with eight, while an injured Cooper Kupp (wrist) nabbed five balls. Fans were also treated to the return of Tyler Higbee with three catches for 60 yards.

Malcolm Brown (two touchdowns), Cam Akers and Darrell Henderson had their way running against the Seahawks defense, slashing their way to 106 yards on the ground. Head Coach Sean McVay seems to have figured out a way to make the system work, you know he would because he is an offensive genius, and each of the backs are much better for it. They feed off each other and there does not appear to be any rest for the defense as they rotate through.

The Rams have taken a significant step forward in the race for the NFC West crown. With seven games remaining, only the Buccaneers, Patriots and Jets remain on the out-of-division schedule (Tampa Bay this Monday in Florida), those teams need to become a stepping stone for the team. Wins against those three opponents gives the Rams nine wins. I feel it will take 11 victories to win the division, or make it into the playoffs. That means two wins are needed in the final four against Seattle, San Francisco and Arizona.

The playoffs are doable for this year’s Rams team, but it can’t rest on its Seattle laurels. They need to keep pressing forward and it should be of the utmost concern for the team from here on out.