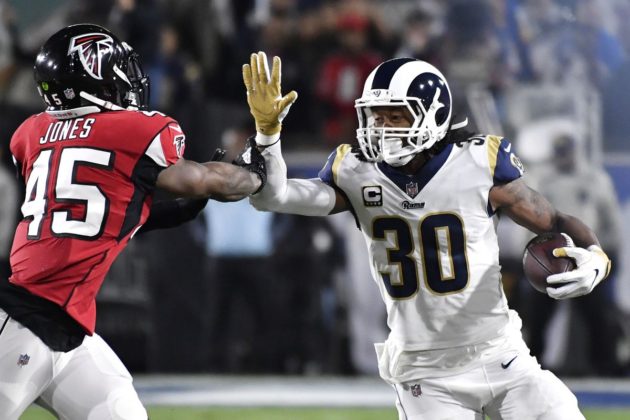 The Los Angeles Rams (3-3) have suffered a frustrating three-game losing streak after starting the season at 3-0. Their most recent loss was a 20-7 collapse at home against the San Francisco 49ers (5-0). The Rams hope to break the losing skid in their Week 7 matchup against the Atlanta Falcons (1-5) at the Mercedes-Benz Stadium in Atlanta, Georgia.

The Falcons are on a four-game losing streak. They fell to the Arizona Cardinals 34-33 last Sunday after missing an extra point attempt. Both teams are looking for redemption, but the Rams are favored to win. As we have seen in recent weeks, it will not be easy.

Rams quarterback Jared Goff had an anemic performance last week with no touchdowns. One bright spot was that he had no interceptions. Goff threw 13 passes on 24 attempts for 78 yards. He was sacked four times. The Rams only score came from a misdirection handoff from Goff to receiver Robert Woods for an 8-yard run, giving the Rams their only lead 7-0 in the first quarter. Running back Malcolm Brown stepped in for an injured Todd Gurley (quadricep) with 11 carries for 40 yards. Darrell Henderson also got to shine with six carries for 39 yards (a long of 22).

Tight end Tyler Higbee led in receiving with three receptions for 25 yards. Cooper Kupp had 4 catches for 17 yards. The Rams receiving corps may have a break with Falcons starting cornerback Desmond Trufant out with a toe injury. Trufant leads Atlanta’s defense in interceptions.

Cory Littleton led the Rams defense against the Niners with 14 total tackles. Aaron Donald had two sacks and four tackles for loss. Donald may have a field day against the Falcons weakened offensive line. The Falcons lost veteran guard James Carpenter to a knee injury. Atlanta will try to step up to contain him.

The Rams need to fix their fundamentals on the offensive line to give Goff better protection. This was the main problem last week as the Rams fell flat in the second half. Atlanta has a strong running defense, but their pass defense is weak. They have also have not had a sack in 242 defensive snaps. The Rams may have a big advantage there.

Falcons quarterback Matt Ryan is solid. Atlanta’s record does not reflect the talent of their veteran quarterback. Last week, Ryan had an incredible 144.9 rating with 30 passes on 36 attempts for 356 yards, 4 touchdowns and no interceptions. Running back Devonta Freeman led in rushing against the Cardinals with 19 carries for 88 yards along with three receptions for 30 yards and two touchdowns. Receivers Austin Hooper and Julio Jones led with a combined 16 receptions for 225 yards. Hooper scored on a 6-yard pass in the fourth quarter.

Injuries in last Sunday’s game against the 49ers was detrimental. Starting left guard Joseph Noteboom is out for the season after tearing both his ACL and MCL, creating more stress on a struggling offensive line. Backup guard Jamil Demby took his place for the rest of the game and performed poorly. Rookie David Edwards is slated to start this Sunday in place of Noteboom.

Rams strong safety John Johnson has also been placed on the injured reserve after hurting his shoulder last Sunday. Rams cornerback Aqib Talib is also out on IR for at least eight weeks due to fractured ribs suffered against the Seattle Seahawks in Week 5.

With the above starting players out, the Rams will fill their roles with safety Marqui Christian and Taylor Rapp and cornerbacks Troy Hill and Nickell Robey-Coleman against the Falcons. The front office also made moves this week to acquire more replacements and make trades. Cornerback Marcus Peters was traded to the Baltimore Ravens for inside linebacker Kenny Young. The Rams obtained offensive lineman Austin Corbett from the Cleveland Browns for a fifth round 2021 draft pick. They also traded their 2020 first round draft pick along with their 2021 first and fourth round picks for Jacksonville Jaguars defensive back Jalen Ramsey.

It’s not clear how involved Corbett or Young will be, but Ramsey is expected to start. Expect a strong possibility of Ramsey lining up with Julio Jones, although Jones may be limited in play due to a hip injury.

Despite the recent shakeups, the Rams have replaced the necessary positions. Still some lingering questions with the offensive line though. Expect this matchup to be a shootout if the offensive line can hold. Gurley is expected to play on Sunday according to Rams head coach Sean McVay. Brown is out with an ankle injury, so Gurley may be sharing snaps with Henderson.