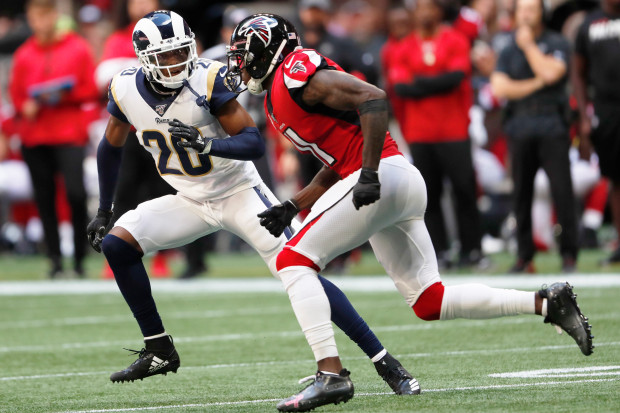 The Los Angeles Rams (4-3) traveled to Atlanta to take on the Falcons (1-6). This was easily the Rams’ most dominant performance of 2019. Not saying much considering how terrible the Falcons are but it is still nice to see a decisive victory.

Let’s be real, most people watching this game was keeping an eye on the Julio Jones versus Ramsey matchup. The matchup didn’t disappoint either. Jones did manage to snag six receptions for 93 yards. Most of his damage came in the first half, so while Jones did make some good plays, they were limited. Not a bad performance considering Jones is one of the better receivers in the league. Something to also keep in mind is Ramsey missed a few games and is coming to a new defensive system.

It’s difficult to say if the Rams would have been able to contain Jones with Marcus Peters, but limiting the Falcons to just 10 points is impressive. Still, with a battered secondary, the Rams coverage did really well.

Technically, the Rams allowed 10 points, but most of it was basically in garbage time. It wasn’t even Matt Ryan that threw the touchdown pass since Aaron Donald caused an ankle injury after a sack to Ryan. Matt Schaub stepped in and threw a pass to TE Austin Hooper to get the Falcons’ only touchdown of the game.

Ryan didn’t have much time to work with the entire game. He was constantly under pressure and suffered plenty of hits. The defense tallied five sacks, two fumbles, one interception and a special teams touchdown. Not a bad day at all. This is also considering that the Rams didn’t play recent acquisition Kenny Young since he needs time to adjust to the scheme.

Sean McVay did a bit of an experiment by moving rookie David Edwards to the guard spot in place of Joseph Noteboom who suffered a season-ending ACL and MCL tear. Jamil Demby originally stepped in several times this season but performed absolutely atrociously last week. This is why McVay asked Edwards to play somewhat out of position. Originally, Edwards was drafted as an offensive tackle, but McVay did rotate Edwards at both spots to become more versatile during the offseason.

The results were impressive. While Edwards wasn’t perfect, he certainly performed better than Demby did. True, the 49ers defensive front is much better than the Falcons, but that’s not to say the Falcons doesn’t have talent. Grady Jarrett is among one of the best defensive tackles in the game and Edwards did have to help contain him. The offensive line as a whole looked much better. It’ll be interesting to see how Edwards progresses moving forward.

This is really a combination of protection and running back performance. Todd Gurley returned and mustered only 41 yards on 18 carries. Although, he did have that impressive 13-yard touchdown catch. Darrell Henderson didn’t fair any better only earning 31 yards on 11 carries. It was an unimpressive game for the ground game overall. Can’t say the touches weren’t there, it was just uneventful. Not to take away from guys like Deion Jones that had a great game, but it’s hard not to expect more from the Rams’ ground game.

Is it just me or does it make anyone else nervous whenever Natson does a return? Don’t get me wrong, I understand that he had an amazing 35-yard return, but that doesn’t eliminate the two previous returns that could have easily been fumbles against a better team. Returning the ball when the defense is already in his face mask is never a good idea. Also gambling by scooping up the ball with the defense near him too is inadvisable. Natson has been shaky all season long, and if not careful, could end up costing the Rams dearly. Perhaps I’m overreacting, but he got lucky that he didn’t fumble the ball on either occasion.