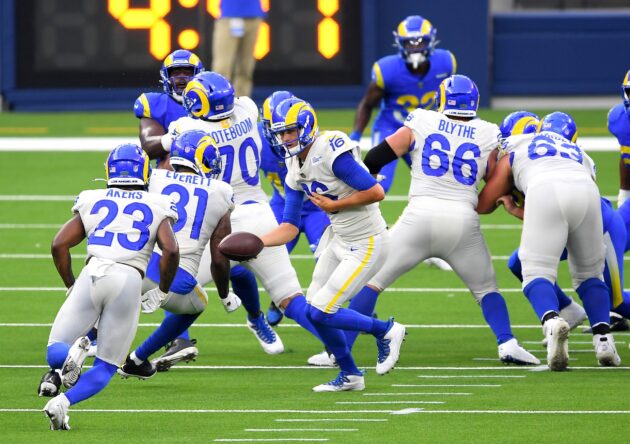 We learned plenty from the recent roster cuts. While there are still more changes to come, it gives us the basic blueprint of what the 2020 Rams will look like. As of September 7, this is what the roster looks like:

Based on this roster, there are a few things noticeable. The coaching staff are believers in Wolford as the backup QB. It was never a doubt throughout the entire offseason. While Sean McVay does appear intrigued with Bryce Perkins’s mobility, Wolford is the direct backup for 2020.

Five RBs on the roster is a first. This isn’t so much due to a lack of confidence as it is the uncertainty of Henderson’s injury. The Rams recently swiped Calais from the Tampa Bay Buccaneers to give the team five RBs. Calais was collegiate star kick return specialist at Louisiana-Lafayette. Seeing as the Rams wasted no time in grabbing him indicates that he might have a role already.

Undrafted free agents Trishton Jackson, Xavier Jones and Eric Banks on the active roster demonstrates the amount of talent the Rams had in rookies. Jackson landed on a crowded receiving corps with plenty of premium talent. The Rams could have easily went with just five receivers.

Jones’s status is kind of up in the air. He could be off and on the roster, but for now, his presence is likely because Henderson’s injury.

Banks also found a spot on a crowded defensive line. For an undrafted free agent to have that kind of impact during a pandemic-riddled offseason, that’s impressive.

The Rams only having four ILBs on the roster is more of an indicator of only having one starter. Young, Reeder and Hollins will likely just serve as a back up role to Kiser. Don’t get me wrong, we can likely expect Young out there from time to time, but mostly Rapp will be playing a hybrid safety-linebacker role.

In the technical sense, the Rams have five safeties on the roster. But guys like Burgess and Rapp will play multiple positions.

Now, that the roster is semi-set, here’s the practice squad:

Also noticeable is the amount of linebackers. Four total LBs is quite extensive for any position on the practice squad, but it expresses the uncertainty at the position. To be fair, Patrick is versatile enough to play both inside and outside linebacker. But still, the Rams will be monitoring the position throughout the 2020 season.

Another thing to take note is who is no longer with the team. It’s a little surprising that the Rams didn’t keep Lirim Hajrullahu or Austin MacGinnis on the practice squad. They will probably contact one of them if Sloman tanks, but it may demonstrate their confidence by not bringing either of them back.

It was a little surprising at first to not see John Kelly on the practice squad. However, the Rams have five RBs on the active roster currently, they are fine at that position.

Clay Johnston is one I believe the Rams were aiming to bring back, but the Carolina Panthers swooped him up and placed him on their practice squad.

There are quite a few names that could just as easily land back with the team at some point. It really just depends on how the team gels and of course injuries. Expect the scouting team to sift through the free agents too. There are more talent this year since some of these players weren’t given much of an opportunity with no preseason and limited training camp.