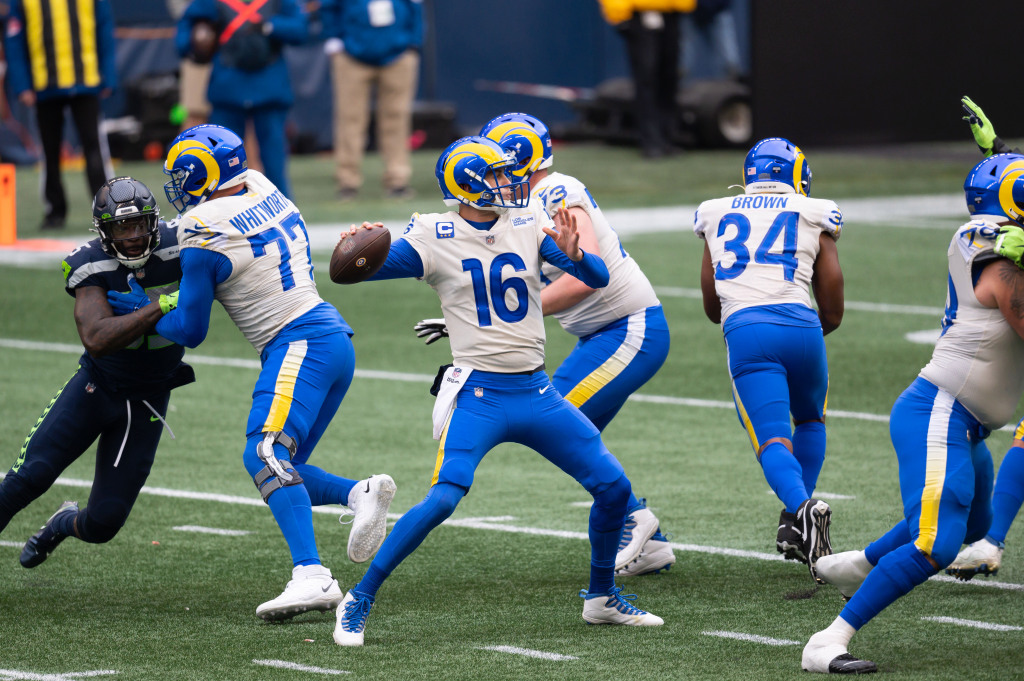 Before the title misleads anyone, I’m by no means saying that the offensive line was perfect. However, one area they improved considerably was run blocking. Keep in mind that the offensive line was ranked 31st in run blocking in 2019. In 2020, Pro Football Focus ranked the Rams third overall in the NFL. That’s the type of improvement teams dream of.

Interestingly enough, the offensive line was a bit of question mark entering the 2020 season. You have to give a major kudos to head coach Sean McVay and general manager Les Snead for sticking to their guns and running with essentially the same offensive line from 2019. You know, the same offensive line that was ridiculed for being terrible? To be fair, the starters aren’t quite the same, but close enough.

About the only new addition to the offensive line was rookie OL Tremayne Anchrum, a seventh round selection. The Rams didn’t bring in anyone through free agency, though they did retain the services of Andrew Whitworth and Austin Blythe.

Offensive linemen have a thankless position and are usually only mentioned if they perform terribly. One of the reasons quarterback Jared Goff received a fair amount of criticism this season is because the offensive line allowed him enough time on most occasions.

This is important to remember since the Rams overcame the injury to Whitworth too. What was a tad surprising is that David Edwards began the season on the bench. Austin Corbett was expected to take one of the guard spots, but it was Joseph Noteboom on left guard. Noteboom would later get injured and Edwards would remain the starter for most of the year.

Blythe proved again in 2020 that he is a much better center than a guard. The move in 2019 may have helped his career a lot. He’s a free agent this season again, but he shouldn’t command too much money. Still, the Rams don’t have any cap space to work with.

Other than Blythe though, the Rams’ offensive line is still in tact. That’s a good thing because even depth was solid. As mentioned above, Whitworth missed a chunk of the season, which prompted the Rams to move Noteboom over to the left tackle position.

To tell you the truth, I’ve never thought of Noteboom as a legitimate left tackle. Sure, I can see him fill in the role on occasion, but not a full-time starter. But he didn’t do too bad. Left tackle is one of the most difficult positions in football, so you can’t expect the transition for Noteboom to be perfect, but he filled the role nicely.

Bobby Evans too was solid in a pinch too. Though, I still don’t quite understand the Rams using Evans instead of Noteboom in the Divisional Round against the Green Packers when Edwards had to sit out. Evans is a solid tackle back up option, but it was clear that he isn’t a decent guard option.

I fought back and forth on this grade, but I think a B+ is fair considering how much they exceeded everyone’s expectations. The Rams only surrendered 25 total sacks the entire regular season. The fact that it’s possible that the majority of the offensive line will be back in 2021 is incredible.

However, the Rams should consider beyond 2021 too. Whitworth is still a solid option at left tackle, but he isn’t getting any younger. The Rams don’t have a real option at a replacement other than maybe Noteboom. The concern there too is his injury history. The Rams don’t have a ton options, but they do have some NFL Draft picks. But addressing the offensive line isn’t remotely close to the Rams’ major needs for 2021.