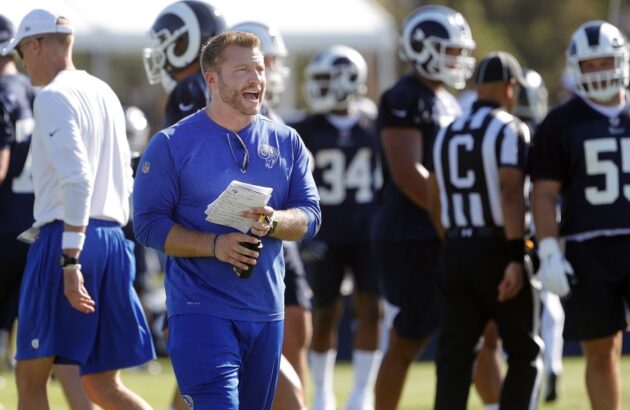 The nation is turning a corner after taking a devastating blow to its health, psyche and economic woes as a result of a global pandemic not seen for over 100 years. What better way to bounce back than to bring professional sports back into the fold? The National Football League is certainly the most popular sport in the U.S.

Things are looking up across the country, even in California where just days ago playing football in California looked bleak and ominous. With football fever in the air again, we here at Rams Talk are taking a sneak peek into what the Rams may need to find out about themselves. as we look at what their biggest needs are coming into and leaving camp.

How will the Rams protect the players, coaches and staff during the COVID-19 pandemic?

Though it’s not something that comes right to mind when you think of NFL training camps opening up, COVID-19 is a reality. Warning flags were raised early on within the NFL. Offensive lineman Brian Allen was the first Ram and the first reported NFL player to identify as testing positive in April. Forcing the Rams to effectively shut down their facility in Thousand Oaks. There were also reports of an unidentified worker at the SoFi Stadium construction site that tested positive, and another worker as a presumptive positive in March as well. The virus had struck the Rams in one form or another.

The impetus is there to protect the players at all costs. Even the United States’ lead infectious disease expert, Dr. Anthony S. Fauci was alarmingly cautious about opening up things too soon. He described in detail what a player might go through.

“This is a respiratory virus, so it’s going to be spread by shedding [the] virus,” Fauci said, via NBCSports. “The problem with virus shedding is that if I have it in my nasopharynx, and it sheds and I wipe my hand against my nose — now it’s on my hand. You see, then I touch my chest or my thigh, then it’s on my chest or my thigh for at least a few hours. Sweat as such won’t transmit it. But if people are in such close contact as football players are on every single play, then that’s the perfect setup for spreading.

“I would think that if there is an infected football player on the field — a middle linebacker, a tackle, whoever it is — as soon as they hit the next guy, the chances are that they will be shedding virus all over that person. If you really want to be in a situation where you want to be absolutely certain, you’d test all the players before the game, and you say, ‘Those who are infected: Sorry, you’re sidelined. Those who are free: Get in there and play.'”

So in a nutshell, diligent testing is a must, not only for the Rams, but for football players everywhere. We are talking testing every day, even if it is just a video day at camp. Closing the practices to the fans is unfortunately necessary too. If the Rams can stay on top of this and stay vigilant, then all they would need to worry about are injuries.

What do the Rams have to do to reinvigorate the offense?

Sean McVay is generally accepted as having one of the brightest offensive minds in the NFL, but there are those out there that believe he is too involved in game day playcalling, and lacks in-game management skills while doing so. Possibly in a bend to those comments, McVay went out and hired Kevin O’Connell as the team’s new offensive coordinator. There is no doubt McVay will lead the offensive charge, but a new OC could bring a different wrinkle that the two minds will have to meld together quickly, preferably before camp starts.

The core of the passing game remains solidly intact, despite the departure of starter Brandin Cooks. There are a few changes to the WR depth chart, and with QB Jared Goff returning for season five, it is believed this is the strongest unit in the offense.

To have a great receiving corps, and a great running game in the NFL no other cog in the offense is as important as the offensive line. This is probably the part of the team with the most questions. The difference between the Rams’ lines of  2018 and 2019 are apparent.

What was the biggest difference? Health. Did you see that right? Yup, health.

L.A. has drafted pretty well over the past few years when it comes to offensive line help, so with the emergence of players who were forced into action last season because of injuries, the line is actually ahead of schedule in respect to depth on the line.

The Rams’ needs on the line are simple when you look at it on paper. If the line can strengthen themselves in the weight room, video room and build  cohesiveness last seen in 2018, then the makings will be there. The depth will overcome any issues the team saw last year.

Make no mistake, with Todd Gurley now playing in Atlanta, the running back position has turned into a hotbed of  competition. The biggest need in the running attack is much more than bringing the playbook into full play. The Rams need to develop a sure fire-system that can take advantage of all the qualities that each back brings to the field. Without doing so, McVay and company will be unable to game plan effectively.

The running-back-by-committee is doable, but the Rams will need to see which of the young backs will see more playing time. Darrell Henderson and Cam Akers are unproven, but are loaded with talent. Malcolm Brown is the lone veteran on the depth chart, but we can likely expect to Brown in more short-yardage situations.

With the excitement of camp upon us, Rams fans everywhere are looking forward to a productive year from the offense.

Part II will focus in on the defense and special teams.