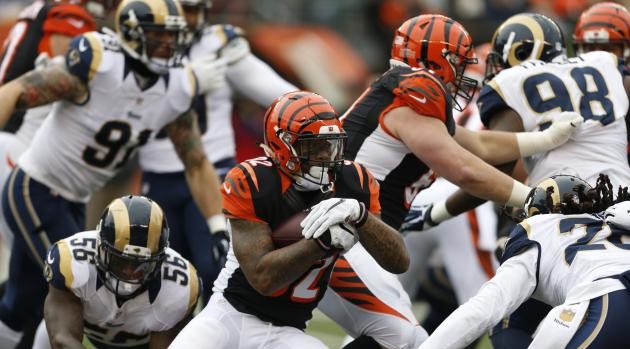 The St. Louis Rams and the Cincinnati Bengals haven’t played each other much. The Rams have only faced the Bengals a total of 12 times since Cincinnati joined league in 1968. Currently, the Bengals lead the series, winning 7 of the 12 games against the Rams.

The Rams didn’t encounter the Bengals until 1972 when they played them at the Los Angeles Memorial Coliseum. This was a defensive brawl, and the sloppy offensive performance didn’t help much either. Both teams surrendered safeties, and the Rams only compiled 149 total yards. The Rams barely came out with a 15-12 victory.

That was the only win the Rams would have in the next 12 years against the Bengals. They suffered a string of consecutive losses to the Bengals: once in 1976 where they lost at Riverfront Stadium, 20-12 and again in 1981 when they returned to Cincinnati but left with a 24-10 loss. The most devastating loss was in 1978, when they lost in Los Angeles.

The Rams were favored to win this game and even started off strong. Part of the problem was that they couldn’t punch the ball in the end zone, and settled with field goals on their first two scores. Sound familiar? The Rams eventually scored a touchdown with a 14-yard run by Terry Nelson, giving them a 13-0 lead. The Bengals responded quickly in the second quarter when QB Ken Anderson found receiver Isaac Curtis for a 46-yard touchdown pass. It was later followed up with a 2-yard rushing touchdown by RB Pete Johnson to give the Bengals a 14-13 lead over the Rams. The Rams answered back with two more Frank Corral field goals, giving them a 19-14 lead in the third quarter. The Bengals were able to seal the game with two more field goals of their own making the final score 20-19.

The 1990 season was a forgettable year for the Rams. What contributed to the unsuccessful season was an extremely slow start and this loss contributed to that factor. Credit has to be given to the Rams for coming back from what seemed like a blowout in the making. Bengals’ QB Boomer Esiason shredded the Rams’ defense and passed for two touchdowns in the first quarter. The Bengals added a rushing touchdown by Eric Ball giving the Bengals a 21-0 lead. Rams RB Cleveland Gary cut the lead down to 21-7 at halftime after scoring on a 2-yard un.

The Rams were better prepared in the second half. QB Jim Everett launched a 55-yard missile to WR Willie “Flipper” Anderson to trim the lead to only seven points. However, Esiason replied with a 14-yard touchdown pass to Harold Green to increase their lead to 28-14. The Rams tied it up in the fourth quarter on a 1-yard rushing touchdown by Gary. Both teams scored a field goal to send the game into overtime tied at 31-31. Unfortunately, the Bengals were able to score a field goal and won 34-31 in an overtime thriller. It’s still amazing that the Rams came close to overcoming a 490-yard Esiason performance.

The Rams went on a three game winning streak once they moved to St. Louis. They won in 1996 (26-16) and in 2003 (27-10). But their most convincing win came during their Super Bowl year in 1999. The only time the Bengals led this game was in the first quarter on a field goal. After that, it was just an aerial assault conducted by QB Kurt Warner. Warner finished the game with 320 yards and three touchdown passes. Receiver Isaac Bruce may have had the most yards with 152, but Az-Zahir Hakim caught all three touchdown passes from Warner and returned a punt 84 yards for a touchdown. The Rams dominated, 38-10.

The Rams lost to the Bengals in 2007 (19-10), which was to be expected considering the 3-13 season the Rams endured. St. Louis then lost in the last game they played against the Bengals back in 2011 (20-13), which was another underwhelming season at 2-14. The Bengals are an elite team in 2015, and they are certainly the favorites to beat the Rams in Cincinnati. But, stranger things have happened. It would be foolish of the Bengals to overlook the Rams.