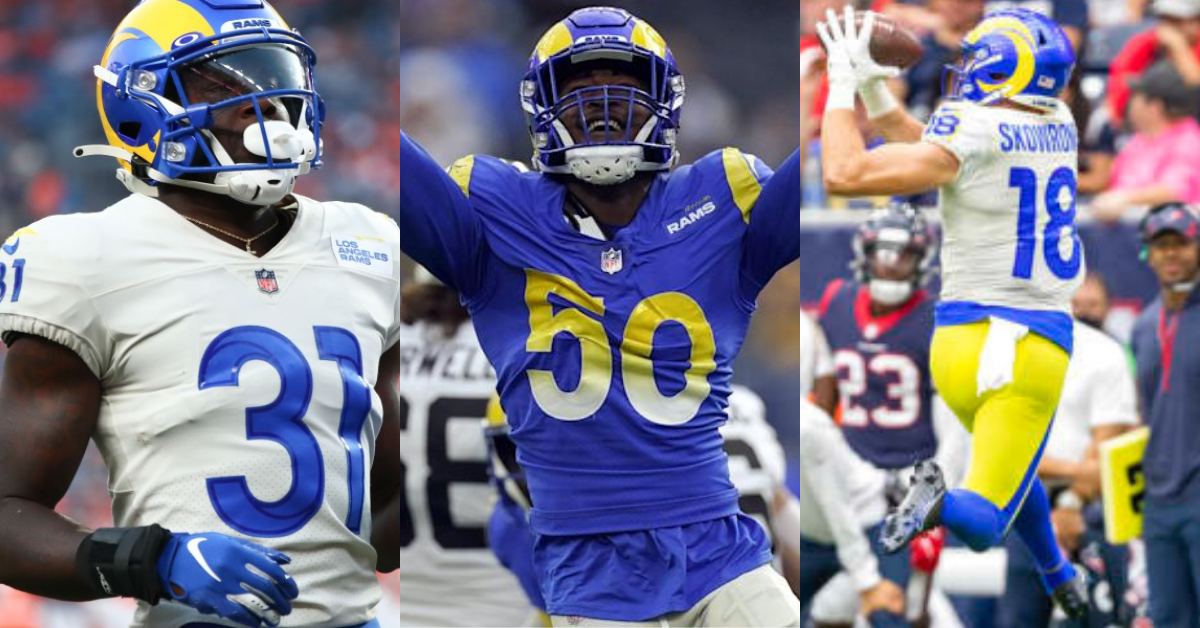 Los Angeles Rams general manager Les Snead and the scouting department generally does a solid job in finding quality players with the limited NFL Draft picks in recent years. But were the Rams able to strike gold in the 2021 NFL Draft?

Well, the Rams opted to address a position that they had a surplus of talent and selected Tutu Atwell. Atwell’s speed is what truly attracted the Rams, and the hope is that the Rams could use his speed in the return game. That didn’t exactly happen. The Rams still preferred to send the NFL’s Offensive Player of the Year, Cooper Kupp. Thankfully Kupp’s presence as a return specialist was reduced with the discovery of Brandon Powell. Atwell returned the ball 10 times for a sparse 54 yards.

Atwell was thought to be different than previous draft selections like Tavon Austin since he was expected to be a volatile weapon for QB Matthew Stafford. To be fair, not a whole lot was expected of him as a receiver since he was buried on the depth chart. His season was shortened after sustaining a season-ending injury in Week 8 against the Houston Texans.

Many fans rejoiced when the Rams finally addressed the inside linebacker position. I was one of them. Jones didn’t disappoint either. He started the season in a reserve role with Kenny Young and Troy Reeder being named the starters. Jones’s emergence allowed the Rams to confidently trade Young away to the Denver Broncos, which led to the Rams being able to acquire Von Miller. Neither trade happens if the Rams aren’t confident in Jones.

Jones played in 15 games and started in seven of them until he landed on the IR late in the season. He missed most of the playoffs but returned for the NFC Championship and the Super Bowl. Jones earned 61 tackles, one sack, four pass deflections and two interceptions. He has a bright future ahead of him if he continues to progress and is easily the bright spot of the Rams’ 2021 NFL Draft class.

There was plenty of uncertainty on the defensive line with the departure of Michael Brockers. The Rams put a lot of faith in Sebastian Joseph-Day and A’Shawn Robinson, and it paid off. Even Greg Gaines took control of one of the starting roles when Joseph-Day landed on the IR. All that said, it didn’t leave much opportunity for Bobby Brown anyways.

There could be more opportunities for Brown next season, especially if the Rams let Joseph-Day walk in free agency. Brown appeared in 10 games and registered one tackle before sustaining a season-ending injury. Seeing a trend?

The Rams had a revolving door of contributing cornerbacks behind Jalen Ramsey and Darious Williams. It was the hope that Rochell would use his rookie season as a sort of “redshirt freshman” year, but struggles and injuries at the position couldn’t allow that notion to happen. It was well known that Rochell possesses potential, but is extremely raw. He did show promise as the season went on, but sustained a season-ending injury in Week 11.

Rochell played in all 11 games, starting in five of them. He registered 14 total tackles, four pass deflections, one interception and one fumble recovery.

You’d think the Rams’ most hyped rookie would be their first draft pick, Atwell. That wasn’t really the case after Harris shined in rookie mini-camps and training camp. The success he saw drew plenty of hope from fans alike. Unfortunately, Harris sustained an injury right before the preseason and he had to play catchup the rest of the way. Especially considering the Rams were still debating what position Harris would play. Harris was drafted as a TE, but head coach Sean McVay would later announce that Harris is a WR. This can change going into the 2022 season.

Harris participated in nine games, but didn’t register any stats since he was buried in the depth chart. He ended up on the IR during the Week 9 loss to the Tennessee Titans, and didn’t return.

Not much to say about Brown. He was a surprise cut on the 53-man roster to start the season. The Rams were able to add him to the practice squad where he remained the rest of the season. The cut was justified considering his quiet preseason appearances.

Funk’s selection was a tad surprising considering the Rams’ depth at RB. But the Rams seen potential in the late-round draft pick.

Funk was injured on-and-off and played 10 games. He had two carries for five yards. His presence was mostly felt in the special teams, which was expected.

Oddly enough, Skowronek is the third most impactful rookie for the Rams, behind Jones and Rochell. The Rams started the season stacked at wide receiver, but needed to rely on Skowronek at times because he suddenly became the fourth option toward the end of the season. He was more valuable on special teams at times, but he managed to finish the 2021 season with 11 catches for 133 receiving yards. Just remember to overlook the dropped touchdown pass in the NFC Championship game against the San Francisco 49ers.

The preseason darling, Chris Garrett. Garrett became a quick fan-favorite considering he was a longshot to make the roster. He was extremely raw, coming from a small school and attempted to make the roster at a fairly deep position. His success in the preseason didn’t follow him to the regular season, only making one appearance in Week 3 against the Tampa Bay Buccaneers.