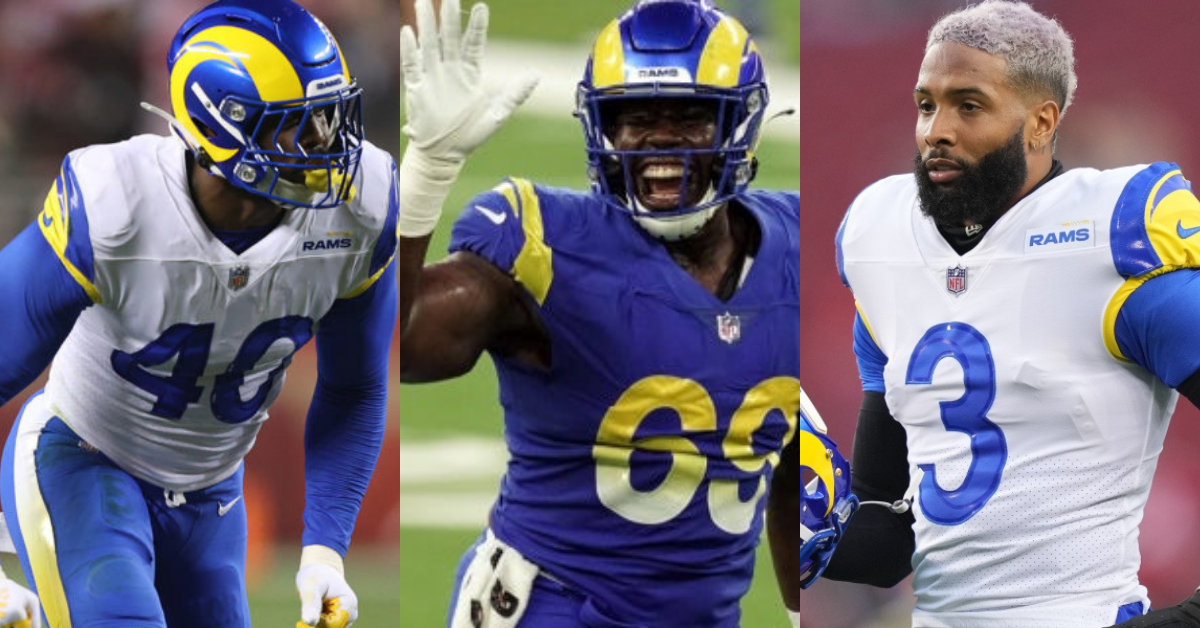 A major congratulations to the 2021 Los Angeles Rams for winning Super Bowl LVI! What’s next for the Rams? Back to work in the front office. The Super Bowl may have been the focus, but general manager Les Snead and the rest of the Rams’ front office has been prepping for the 2022 offseason.

The Rams signed OBJ once the Cleveland Browns released him mid-season. Initially, the contract seemed fairly tame considering it was highly incentivized. But the Rams happily paid off the incentives considering OBJ is a major reason why the Rams brought the Lombardi Trophy to Los Angeles.

Both parties benefited from Beckham’s arrival. The Rams found yet another weapon for QB Matthew Stafford and a suitable replacement for WR Robert Woods. Meanwhile, OBJ resurrected his career after having a major drop-off in Cleveland.

Sadly, Beckham likely tore his ACL in the Super Bowl and a timeframe on his return would be anyone’s guess at this point. OBJ expressed interest in returning in 2022, and the Rams would absolutely love to have him. The injury does complicate things a little though. At least Woods would be back on the field should OBJ decide to stay in L.A.

The Rams enjoyed Miller’s service nearly rent-free in 2021. While the Rams didn’t contribute much monetarily, they did pay in a 2022 second and third round draft picks. Seems like a high price for an aging veteran, but he too was instrumental in the Rams’ Super Bowl victory. Having a full offseason to develop an even stronger bond with the Rams defense would be ideal, but the question circles back to if the Rams can actually afford his services? Miller has mentioned that he would love to test the market as well, which is not a good sign for the Rams.

Offensively, the Rams seen some major success in 2021 and the offensive line is a major part of that. Corbett’s versatility alone is highly coveted. Truthfully, Corbett may not have been the Rams’ best offensive linemen, but his cost went up by contributing to the Rams’ Super Bowl appearance. There are certainly better offensive linemen available, but a high-demand market may take the Rams out of the equation. He’s definitely one of Snead’s most under-the-radar acquisitions.

Speaking of offensive linemen, Noteboom will be tough to retain. Snead alluded at the trade deadline that teams were interested in Noteboom. Easy to see since Noteboom became one of the more dependable reserved linemen in the league. His capability of playing left tackle at a reliable level will no doubt raise his cost. This is concerning considering the Rams still aren’t sure if Andrew Whitworth will be back in 2022. Even if Whitworth decides to come back, he will be, at best, a one-year band-aid. Noteboom may be the player the Rams need to invest in.

Allen being a free agent in 2020 would have been a non-issue given how poorly he played in 2019. Somehow Allen reworked his game and elevated it to a Pro Bowl level. He was one of the Rams’ best offensive linemen and it showed. But what will his market value be like? Teams are willing to pay big money for interior linemen now, and the Rams simply may not have enough to bring him back. Coleman Shelton could replace Allen theoretically, though he is a restricted free agent himself.

This is a tough one to evaluate. Joseph-Day earned a starting role in 2021 and played phenomenally until being placed on the IR mid-season. There’s no question about his skill level, but he did get overthrown by Greg Gaines. Gaines emerged as a solid starting option. It’s not quite clear who would be the starter between the two should the Rams be able to bring back Joseph-Day. The Rams will likely move on.

Williams was the free agent that most fans were dreading seeing the negotiations after the 2020 season. After the 2021 season, it seems like bringing him back is much more doable. To say that Williams had a disappointing 2021 season would be an understatement. There were times Williams held his own and did a solid job. However, he felt more like a liability when he struggled, which was often. The Rams may not have too many other affordable options in free agency, so it may be in their best interest to bring back Williams.

Michel was traded at the latest time imaginable, a few weeks before the regular season began. He was a key addition considering Cam Akers didn’t expect to play at all in 2021. At times, Michel looked like the true starter, especially when Darrell Henderson landed on the IR. Teams looking for a RB will absolutely consider Michel. It would be surprising to see Michel back in 2022 with Akers and Henderson on the roster even with the consideration of injury history on the depth chart.

Deayon has been with Rams for a few years and emerged as a key contributor at times. While Deayon should never really be considered a starter, he can provide depth. Beyond Jalen Ramsey, the Rams have a major need at the cornerback position should Williams sign elsewhere. Deayon shouldn’t cost too much to retain.

It’s not a guarantee the Rams could bring back Miller, but retaining Okoronkwo shouldn’t be too tough. The potential has always been there for him, but he just hasn’t been that consistent either. To be fair, Terrell Lewis and Justin Hollins have had mixed results too.

The Rams felt Mundt’s absence when placed on the IR earlier in the year. His blocking is absolutely needed, especially on the ground game. It shouldn’t be too hard to bring him back in 2022. The Rams will need to make decisions on the TE depth chart though.

Howell could be brought back to compete for a roster spot. It’s likely should Michel leave.