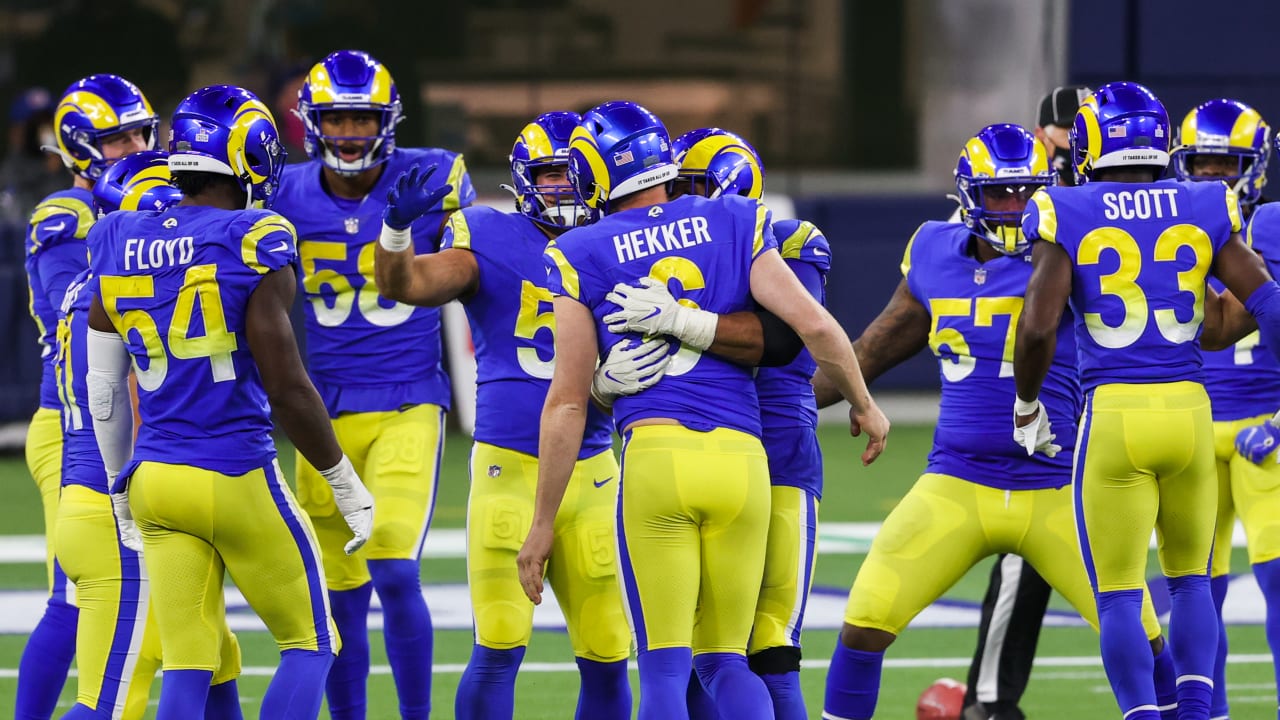 One week after taking a slug to their “soft” midsection on national television, the Los Angeles Rams (5-2) moved back into NFC West contention with a three-team performance. Once again, playing in front of the country, their performance was a 180-degree turn in terms of physicality, effort, toughness, ability and maturity in a thorough throttling of the previously one-loss Chicago Bears (5-2).

Expecting a low scoring game and a battle of wills between two stout defenses, the game was everything it was thought to be. Except one difference, not seen before this season, the Rams played well on offense, defense and special teams. They weren’t perfect, but all units played well enough.

Since this column has often chastised the special teams effort of L.A., it will begin with a look at what Johnny Hekker and Nsimba Webster were able to accomplish in this game. Even place-kicker Sam Sloman was close to money in this game, but suffered a foregone fate as he was released by the team Tuesday.

Hekker had his best game of the season, placing four kicks inside the 10-yard line, pinning the inept Bears offense in a dreadful position time-after-time. Webster tracked one punt and neatly grounded it on the Bears one-yard line.

Webster also did his thing in the return game, as Rams fans actually saw some punt returns and kickoff returns. He had one return on a 56-yard punt that saw him gain 15 yards, but the run looked longer. It was just so clean, much like Raymond Calais’ 23-yard kick return from the 2-yardline out to the 25. The Rams blocking schemes looked and felt clean throughout.

Sloman missed a field goal in his last game as a Ram and hit on all three extra point attempts, but unfortunately for him this is the NFL, and every point counts, especially in the ultra-competitive NFC West.

Jared Goff overcame a sluggish start to the game, fans are used to seeing a first-drive score from the team and consecutive completions from their quarterback. In this game, his initial passes were long, short and ineffective. He finished the game 23/33 for 219 yards and two touchdowns.

Once the Rams reached their tempo, they were able to finally get the much needed running game, behind Darrell Henderson and Malcolm Brown, into gear with an up tempo passing game. Goff found Josh Reynolds with the game’s first touchdown of the game. Even Johnny Mundt filling in for an injured Tyler Higbee got into the act catching three passes.

Henderson and Brown were impressive in the run game, slashing through Chicago’s defense, which Head Coach Sean McVay thought they may be able to do. One particular run came in the third quarter when Brown took the ball from the 12-yard line he carried the rock for six yards, and then carried at least four Bear defenders to the two-yard line. It was an amazing display of strength, but the real smash-mouth carry came on his touchdown run moments later. He bulldozed his way into the end zone, barreling in from the one-yard line. A defender can be seen bouncing off of Brown.

Cooper Kupp also made amends this week catching all six of his targets for 43 yards. Gerald Everett also caught four balls, one for the team’s final touchdown.

Finally, the defense! Oh, they showed up in this game for sure! After being called out by their leader Aaron Donald as playing soft against the San Francisco 49ers, the team put together an all-out effort to stymie a Chicago team that plays close, ugly games and is definitely a contender.

Donald shared a sack of Nick Foles with Greg Gaines, and former Bears player Leonard Floyd nabbed Foles for two more sacks. The team had four on the day.

Los Angeles kept their second half display of low or no scoring in the second half with interceptions by Taylor Rapp and Jalen Ramsey.

What I was most happy to see in Monday night’s game was the bounce-back ability of the team. After looking horrible one week, they showed they are a team to be reckoned with because the numerous leaders.

Play continues Sunday as the Rams take on Miami (3-3), who will be debuting their rookie quarterback from Alabama, Tua Tagovailoa. The Rams got their first win against a winning team Monday, but need to continue their momentum, as games against Seattle and Arizona are on the horizon.