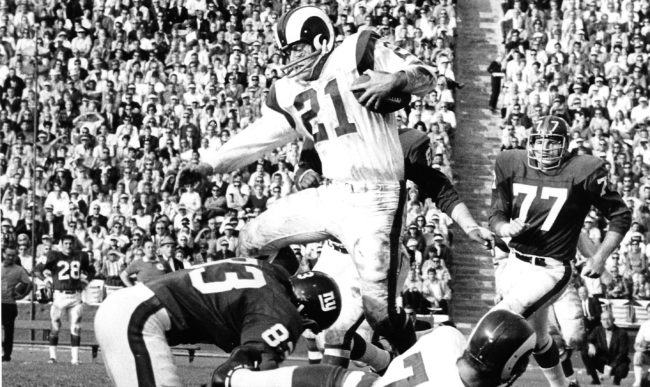 The Pro Football Hall of Fame has missed the boat when it comes to former Los Angeles Rams defensive back Eddie Meador. I don’t mean this as a criticism of such a wonderful institution. It’s just the reality of the situation, and unfortunately, Meador will pay the price for it if nothing is done soon.

The safety position has been undervalued by Hall of Fame voters for years. As of July 2018, there are only 13 safeties in Canton, some of which played cornerback as well. By comparison, there are 32 running backs, 26 quarterbacks, 27 wide receivers, and 30 linebackers from the Modern Era in the Hall. Combined, only 26 total defensive backs are enshrined. At any given time, teams field four or more defensive backs, yet that position group still sits behind linebackers (30), defensive lineman (37), and offensive linemen (45).

The evolution of the modern passing game appears to be one reason why safeties are undervalued. Quarterbacks rarely threw the ball during the early modern age. For example, former Rams great Roman Gabriel won the NFL MVP award with 2,549 passing yards, 24 touchdown passes and seven interceptions. He completed only 54.4 percent of this throws. In today’s NFL, Gabriel’s touchdown-to-interception ratio is the only stat that stands out.

Teams didn’t throw the ball as much, and defenses had more freedom to make plays in the secondary. However, because teams didn’t throw as much, safeties were viewed as less valuable. Even in today’s NFL, safeties are still often treated as a dime a dozen. Still, that doesn’t change what Meador did on the field. He posted the numbers to earn more than a passing glance at the Hall of Fame.

Meador played in 163 out of a possible 164 games in his 12-year career. He didn’t miss a contest until his final season in 1970, and started 159 straight games at one point. During that time, Meador earned six Pro Bowl berths (1960, 64-68) and two First Team All-Pro honors (1968-69. He was one of three safeties on the 1960’s All-Decade Team, with the other two (Larry Wilson and Willie Wood) currently in the Pro Football Hall of Fame.

Meador recorded a team-record 46 interceptions during his career and returned five of them for touchdowns. Not even the great Nolan Cromwell comes close to his interception totals. Meador also holds the team’s all-time record for blocked kicks (10) in both a career and season (4). He also holds the Rams’ team record for career fumble recoveries (18).

His durability and production led to him being named to two separate All-Time Rams’ teams. However, there is more to Meador than just the interceptions, fumble recoveries and blocked kicks. He became a prototype for the modern safety.

Today, an NFL safety is basically a jack-of-all-trades. A safety must be able to play the run, cover reasonably well, and tackle. Few safeties excel in all three facets, but that’s exactly what made Meador special. He did everything. Meador wasn’t afraid to get dirty on the field. It’s unfortunate that the NFL did not record tackles at the time, because he unofficially compiled over 100 tackles in multiple seasons. He suffered a back injury that has stayed with him the rest of his life as a result of making a tackle. He was making the play when Deacon Jones came in behind him and accidentally hit him in the back.

Overall, Meador proved to be a multi-dimensional talent. He featured solid speed, good hands, and a strong instinct for the football. His numbers show it, but most people haven’t seen film on him. They don’t understand that he was a precursor to the safeties that take the field today.

Hall of Fame voters know the stats. It’s about more than the numbers with Meador. It could be argued that the Fearsome Foursome’s dominance up front made it possible for Meador to succeed in the secondary. However, it could also be argued that Meador’s performance in the secondary kept opposing quarterbacks nervous about throwing the football. The 1960s Los Angeles Rams defense was more than just the Fearsome Foursome. It was players like Eddie Meador and Maxie Baughan that made it easier for linemen like Jones and Merlin Olsen to perform at higher levels. One can only hope that sooner rather than later, the Hall of Fame Selection Committee will look back and see what Meador accomplished. He deserves to be in Canton, and it’s time for it to happen.