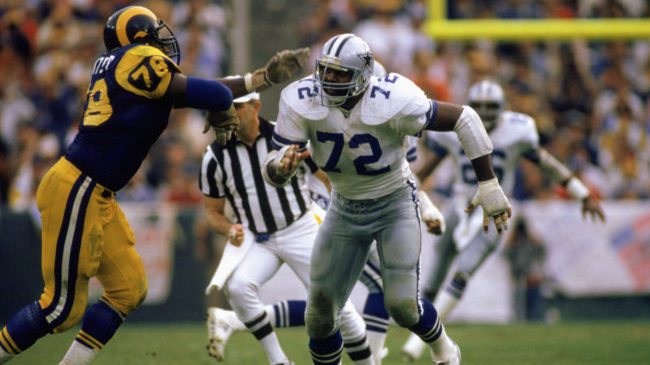 However, these two teams were regular opponents in the playoffs between 1973-1986. The 33-year lull is over, and this season’s NFC Divisional Playoffs matchup between the two teams will bring the storied postseason rivalry out of hibernation.

The Rams have played the Cowboys eight times in the postseason, the most versus a single team in franchise history (seven against the Vikings). With an even 4-4 record between them, the winner will break the tie and earn bragging rights in this longstanding playoff rivalry.

The Playoff Rivalry began in the 1970s

The first playoff meeting between the Rams and Cowboys was in 1973. Los Angeles traveled to Dallas for the NFC Divisional Round. Head coach Chuck Knox’s Rams fought back from 17-0 deficit by scoring 16 unanswered points. Yet the Cowboys put the game away on quarterback Roger Staubach’s 83-yard touchdown pass in the fourth quarter. Dallas won their first playoff matchup with the Rams, 27-16.

Just over a year later, the Rams hosted the Cowboys in the 1975 NFC Championship Game. The Rams owned homefield advantage this time, hoping for a revenge game win. However, the Cowboys overpowered the Rams early and embarrassed them 37-7.

The two NFC powerhouses met again in the NFC Divisional Playoffs a year later. After losing two consecutive playoff games to the Cowboys, the Rams finally got their revenge win in a close 14-12 game. Running back Lawrence McCutcheon scored the game-winning touchdown from a yard out in the fourth quarter. The win finally got the proverbial monkey off the Rams’ backs with this playoff win and brought the head-to-head record to 2-1.

This first win by the Rams was a big one, turning what was previously a Cowboys-dominated matchup into what has since become the longstanding NFC playoff rivalry between these two teams.

Unfortunately, the Rams suffered a blowout 28-0 loss a couple seasons later against the Cowboys in January 1979. With a 3-1 record in favor of the Cowboys, the Rams had a mountain to climb in their playoff rivalry. However, one game changed the fortunes of the matchup for the next six years.

One of the best games in Rams playoff history took place against the Cowboys one year later, again in the NFC Divisional Playoffs. The Ray Malavasi-led Rams made the trip to Dallas once again in what became a historic matchup with Staubach and the Cowboys.

The Cowboys had the homefield advantage, but the Rams finally had a quarterback they could rely on. Quarterback Vince Ferragamo guided the Rams through the stretch run of their 1979 schedule and onto the field for an improbable meeting with the Cowboys.

The game was more than a battle; it was a war. Staubach suffered a concussion, which resulted in his retirement after the game. Rams future Hall of Fame defensive end Jack Youngblood left the game with a broken leg, only to return to the field with his leg taped. It was clear how much was at stake for the Rams in this game and how much they truly wanted, and needed, to win.

The Rams won the hard-fought historic battle 21-19 thanks to a 50-yard touchdown pass from Ferragamo to Billy Waddy. The victory set them up for their 9-0 victory over the Tampa Bay Buccaneers in the NFC Championship. As NFC Champions, the Rams headed for Super Bowl XIV to face the vaunted Pittsburgh Steelers.

The Rivalry Continues into the 1980s

It took a couple of years, but the Rams’ reloaded for another run. They selected running back Eric Dickerson with the No. 2 overall pick of the 1983 NFL Draft. The decision changed the Rams’ fortunes in the 1980s. Dickerson’s addition gave the Rams a centerpiece for their offense to build around. This decision led Los Angeles back into the playoff hunt and onto a collision course with the Cowboys.

It didn’t take long for the Rams to face Dallas in the playoffs again. Less than a year after the draft, Dickerson led the Rams to the playoffs. He rushed for 99 yards in his first playoff game and helped the Rams earned a 24-17 victory over the Cowboys.

Dickerson and the Rams followed up with another huge performance in Januarly 1986. They shut out the Cowboys 20-0 in their most convincing playoff win in the rivalry. Dickerson posted 248 yards on the ground, getting into the end zone for two touchdowns, one of which was a glorious 55-yard run.

With a final score of 20-0, the tables had turned. The Rams had finally put the Cowboys to shame, evening the overall playoff record to 4-4 between the two teams.

Over three decades later, this playoff rivalry from the ‘70s and ‘80s will finally be renewed this Saturday.

The fact that most players (as well as Coach McVay) weren’t even born the last time these two teams met in the playoffs does not diminish the importance of this game to anyone on the field.

To say a lot is riding on this game is an understatement for the 13-3 Rams. They would not only take the 5-4 all-time playoff lead over their rival Cowboys, but this talented Rams team would notch its first playoff win under Sean McVay and, most importantly, clinch their first NFC Championship berth since the franchise returned to LA.