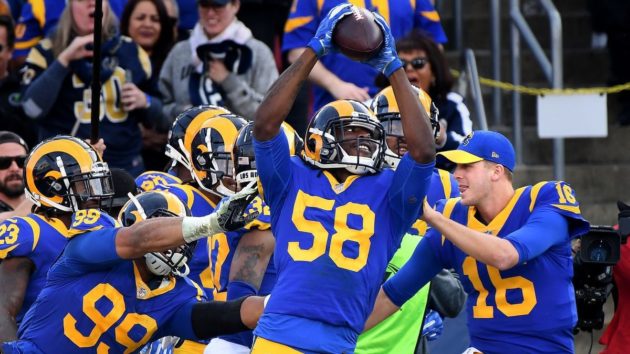 The 2019 offseason is underway and the Los Angeles Rams are focusing on the 2019 NFL Draft. Currently, the Rams have five picks beginning with the 31st overall in the first round. Their next pick isn’t until the fourth round, but that’s not including future compensatory picks. The Rams are receiving three compensatory picks, giving them a total of eight picks. But the question remains, what are the Rams’ needs?

The biggest need on the offensive side of the ball is offensive linemen. The offensive line played well since head coach Sean McVay’s arrival. They’ve earned the Built Ford Tough Offensive Line of the Year at the 2019 NFL Honors. No doubt that this is a talented O-line, but it’s also one of the oldest. Bringing in some youth is necessary to prepare for the 2019 season and beyond.

One huge question of the offseason is if veteran left tackle Andrew Whitworth will retire. He has gone “radio silent” on all social media deciding to focus on family since the Super Bowl. Center John Sullivan may be looking to retire too. The Rams need to prepare for these potential retirements this season or in the future.

Free agency could create a need at left guard since Rodger Saffold is now a free agent. Drafted 33rd overall in 2010, Saffold is the longest-tenured player on the team. Saffold made it clear he wants to continue his career with the Rams, saying “Of course. I’ve said that all throughout the year, so I don’t think it’s any surprise that I want to be back (with the Rams).”

Meanwhile, the Rams have been priming offensive lineman Joseph Noteboom who will likely see more playing time in upcoming seasons. Center Brian Allen may factor in also. There’s no doubt that the Rams will be looking to draft offensive linemen.

Aaron Donald and Michael Brockers will need help with so many free agents entering the market. Ndamukong Suh, Dominique Easley, Ethan Westbrooks and Morgan Fox are all free agents. There is a possibility that most of them aren’t coming back. John Franklin-Myers showed great potential in his limited playing time, but the the Rams will need to add depth and potentially a starter on the defensive line.

The biggest need overall is in the linebacker corps. Cory Littleton emerged as a Pro Bowler in his first season as a starting inside linebacker. The Rams absolutely need to make an effort to bring him back. Rookie linebacker Ogbonnia “Obo” Okoronkwo will enter this offseason fully healthy and will compete for playing time. The Rams’ inability to stop the run and cover the middle is the main weak point of the defense. Quarterbacks are too comfortable in the pocket also, so expect the Rams to look for linebackers early and often if not addressed in free agency.

The Rams secondary disappointed at times, especially with Aqib Talib out. Talib’s return to the field opposite of Marcus Peters created the balance needed in the secondary. But, depth must be addressed to prevent the disaster we witnessed this past year from happening again. It couldn’t hurt to look at young talent in the NFL Draft to learn from Talib and Peters.

Another key free agent is Lamarcus Joyner. He did not play up to his franchise tag value, and will likely play in a different uniform. General managed Les Snead drafts safeties well, so expect the Rams to look for a new starter in the draft. One thing is certain, the entire defense needs to be considered this offseason.

The Rams will need to make a decision on key reserve players such as QB Sean Mannion and RB C.J. Anderson, among others. Mannion’s body language and limited playing time doesn’t provide confidence if Jared Goff goes down. It may be time to bring in a backup that can take the reins and win. Anderson’s value increased during his short stint with the Rams. The Rams would love to have him back, but the upcoming salary cap limits them. This brings up RB Malcolm Brown since he too is entering free agency. He definitely could be a starter elsewhere, prior to the injury. The Rams will likely be looking to the young John Kelly as the primary backup to Todd Gurley.