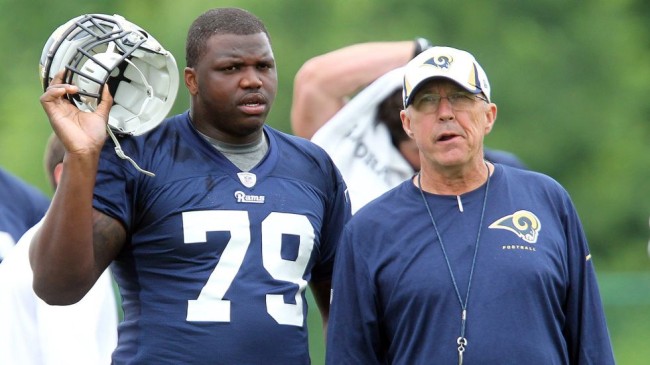 The St. Louis Rams held the second overall pick in the 2014 NFL Draft with plenty of players to choose from to help the team for the foreseeable future.

The only player off the table when the Rams selected was former South Carolina defensive end Jadeveon Clowney, who was seen by many as the closest thing to a consensus No.1 overall talent in the draft class. This left the Rams will the chance to go in several directions with their first of two first-round picks.

Entering the 2014 draft, the Rams had several areas that they needed to address, namely at offensive line, defensive back, and wide receiver.

The Rams had also looked into other scenarios such as trading the second-overall selection for a package of several picks to move down to select more players. In short, they exercised all the options they had in front of them before making a decision.

St. Louis decided to select Auburn offensive lineman Greg Robinson, who was seen as one of the top linemen in the draft next to Texas A&M’s Jake Matthews. Robinson had proved in the collegiate level to be an effective run blocker, but he had struggled at times in pass protection.

The Rams overlooked his deficiencies and believed that he had the potential to develop into a stable force on their offensive line for years to come. They also had plans for him to switch over from tackle to guard, in hopes that he would eventually start alongside Pro Bowl tackle Jake Long on the left side of the offensive line.

Robinson struggled from the get-go with the transition in training camp and throughout the preseason, which led head coach Jeff Fisher to relegating him to a reserve role in the first four games of the season. He didn’t make his first start until Week 6 against the San Francisco 49ers, which was mainly to due to guard Davin Joseph’s poor play.

The rookie then slid over in the starting lineup from left guard to left tackle after Long suffered a season-ending ACL tear in the team’s Week 8 34-7 loss to the Kansas City Chiefs. Robinson played the final 21 snaps at tackle in the loss and has started the last three games at the position for the Rams. He played well in the Week 9 matchup against the 49ers, during which the team allowed just one sack.

Although Robinson has picked up his level of play over the last couple of weeks, it begs the question would the Rams have been better off selecting a player from another position such as a wide receiver?

It’s been nearly eight years since St. Louis had a true No. 1 receiver. Danny Amendola had the potential to be that top receiver, but injuries forced the team to look in another direction. The Rams have prioritized improving the wide receiver position in recent years, including last year’s selection of former West Virginia wideout Tavon Austin. However, their efforts haven’t resulted in the emergence of a true No. 1 receiver, although it appeared that Brian Quick was emerging prior to his injury.

The Rams had their opportunity to add a young receiver in this year’s draft to solve that problem. St. Louis could have taken the likes of Clemson’s Sammy Watkins,  who was coming off an impressive junior season of 101 receptions for 1,464 yards and 12 touchdowns. General manager Les Snead also could have taken Texas A&M’s Mike Evans, who had established himself as the best receiver coming out of the SEC with 69 receptions for 1,394 yards and 12 touchdowns.

They also had several possibilities with their second first-round pick. Florida State’s Kelvin Benjamin was available, as was LSU’s multi-faceted Odell Beckham Jr. It was a deep wide receiver class and it’s clear that the Rams had plenty of options at their disposal. Any one of these receivers would have been a step in the right direction, considering the impact they have made with for their respective teams this season.

Evans’s high level of play was highlighted with his performance last week against the Washington Redskins. He caught seven passes for 209 yards and two touchdowns, which marked the first time a rookie receiver has accomplished that feat since Randy Moss did so in 1998.

He has also been able to record at least four catches in each game and has recorded less than 49 receiving yards just once this season. Evans continues to be a great deep ball threat, leading the NFL with 15 catches on passes that traveled at least 20 yards in the air. He has also tied for second in the league with Benjamin 24 deep targets.

Benjamin has the been the Carolina Panthers’ No. 1 receiver from the onset of the season. He has been a go-to player for Cam Newton and leads all rookie wideouts heading into Week 12 with eight touchdowns and is second in receiving yards (768) behind Evans.

Last but not least, Beckham Jr. has come on strong with three straight games of at least six reception and 90 receiving yards. Each of these receivers is also all currently in the top five statistically for rookies in touchdowns, receptions and receiving yards.

What this points to more than anything, is that Rams had their chance to nab one of these young and talented rookie receivers. They instead decide to go the route of trying to improve their offensive line. Taking an offensive lineman is often seen as the safer route with a high draft pick because the wide receiver position has the appeal of a high-risk gamble.

However, in hindsight, it is a gamble that the Rams should taken given the poor collective play of the wide receiver corps over the past few seasons. It is no secret that the team has needed a go-to receiver for their quarterbacks to throw to and each of these young wideouts, especially Watkins and Evans, fit the skill set of what they want.

One of these receivers could have given them an interesting duo alongside third-year veteran Brian Quick, who was amidst of a breakout year before suffering a season-ending shoulder injury. It could have also allowed Austin to play solely in the slot, which is a spot that he excelled at in college. Maybe it would have changed things for Sam Bradford in the preseason, or for either Shaun Hill or Austin Davis in his place after that.

One thing is for sure: the Rams will be heading into next year’s draft with the same glaring need for a playmaker at wide receiver.