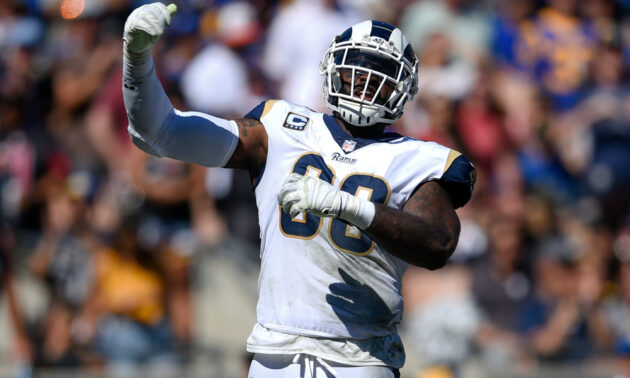 Veteran players are essential for success. They are mentors to rookies and are familiar with team strategies. If they spend their entire career with one team, their leadership is valuable. They know a team’s culture and what it takes to win. These players specialize in certain skills that stand out from other teammates.

The Los Angeles Rams have all the above characteristics with defensive end Michael Brockers. Will the Rams bring Brockers back for next season? Let’s look at what he has accomplished so far with the franchise.

Brockers appeared to be regressing in 2018. He had 3.5 less sacks, had half the tackles for a loss and half the quarterback hits compared to his 2017 numbers. He showed great improvement in 2019.

In fact, Brockers had a career-best 2019 season. He saw 766 snaps, which was the most he had in six years. He had three sacks and a career high 63 tackles, including three for a loss, nine quarterback hits and one pass deflection. He may not have shined like his superstar teammate Aaron Donald, but it was an improvement from the 2018 season. Donald speaks highly of Brockers as a great run stuffer and is a huge reason for the defensive line’s success. He claims Brockers has not changed since Donald joined the Rams.

Even though the Rams were humiliated 45-6 in their Week 12 loss to the Baltimore Ravens at home, some defensive players still shined. One of them was Brockers. He had his strongest performance this season against the Ravens. Brockers had one sack, nine tackles (one for a loss) and two quarterback hits. The sack was in garbage time on backup quarterback Robert Griffin, III, but Brockers was all over the field making plays throughout the entire game. He also had a great performance in the Rams’ win over the New Orleans Saints in Week 2. Brockers had one sack for -11 yards on quarterback Teddy Bridgewater. He also had three tackles (two for a loss) and one quarterback hit.

Brockers’s Value to the Rams

Not only has Brockers played exclusively with the Rams, but he is the longest-tenured position player. He is also one of six players that made the journey from St. Louis to Los Angeles in 2016 and is still active on the Rams roster. That includes Donald, running back Todd Gurley, kicker Greg Zuerlein, punter Johnny Hekker and long-snapper Jake McQuaide.

One can say that Brockers needs to stay for camaraderie and motivate the Rams. It is great to have a workhorse like him on the roster. It would be amazing to have him back on the team. The team would certainly welcome him back.

Another can play the analyst. He is a former team captain who has seen the team through thick and thin under two head coaches with two vastly different styles. His career with the Rams had highs and lows, but the truth is he had a solid 2019 season. He still has the desire to play for the Rams, possibly finishing his entire career in horns. He may still produce for the defense. With new defensive coordinator Brandon Staley sticking with a 3-4 defense, Brockers would be familiar with the scheme and position. He may also be motivated with a new reinvigorated coaching staff. The Rams will still have defensive line coach Eric Henderson, a player favorite.

What’s Next for Brockers?

In the end, only the front office can make the decision, but money is also a major issue. Brockers just finished a 3-year, $33,250,000 contract extension. Due to salary cap restrictions, they would have to get creative in order to bring on other free agents the Rams may want to re-sign. Brockers may have to take a pay cut. Would he be willing to take less money to stay? If the answer is yes, then they may have a contract waiting. If he says no, then the Rams will likely let him walk.

Do the Rams have enough depth at the defensive line? Technically, yes they do. None of them match the size and experience of Brockers. Marquise Copeland, Tanzel Smart and Morgan Fox all have potential to replace him. Fox would be the best bet. He is considered a strong backup to Donald as well, but he is also a free agent. Smart and Copeland both are still young and have time to build their skillset. Sebastian Joseph-Day and Greg Gaines are true nose tackles and most likely to remain in those positions next season. All three defensive line starters made an impact in the stat box in 2019. All had sacks on record and Donald led in sacks for the fifth year in a row.

The bottom line is that Brockers is worth keeping for a variety of reasons. The main reason being his experience. That experience brings defensive production and great knowledge at his position. He still has potential for a good 2020 season. Teaming back up with Donald and Joseph-Day is a positive that will make it tough for offenses throughout the league. The questions isn’t so much should the Rams bring back Brockers, it’s can they afford him? Free agency will tell us all soon enough.