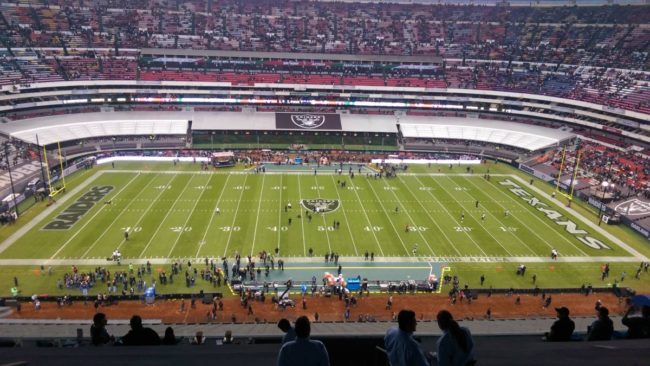 On January 31, the Los Angeles Rams announced that they will be hosting the Kansas City Chiefs in Mexico City during the 2018 season. The game will mark the third straight season the Rams hold a home game on international soil.

Playing home games in foreign countries gets old for both the fans and the team. For example, running back Todd Gurley expressed frustration with international games in 2017. However, there is a case for the Rams to do this. It’s not one that most fans will like, but it does make sense long-term.

The Rams struggled through 14 years of ineptitude before finally making the playoffs in 2017. During that time, the team’s fanbase suffered through poor football, a painful stadium situation, and the controversy surrounding the team’s relocation. The Rams’ prestige across the league and around the world was at an all-time low. One way to draw fans back to the franchise is to win, which it’s finally doing. Another way to build a fanbase is to bring the product to a new group of people.

That’s what these games do. It gives the Rams a chance to grow their brand to fans in other locations that do not serve as a home to NFL football. Rams owner Stan Kroenke has long been a part of building an international brand with Premier League powerhouse Arsenal. He understands the value in taking your product to the masses. This is no different.

There other side of this is the Los Angeles Memorial Coliseum (sorry, I can’t call it by it’s new name). The stadium is no longer an NFL venue. It’s a stopgap until the new stadium in Inglewood is completed. Tailgating at the Coliseum, while still fun, remains a challenge and costly for the price paid by fans. The stadium itself doesn’t even have a place for a team store. Instead, the Rams put up a temporary tent (think circus here) to sell their goods. It’s just not NFL quality in 2018.

I’m not saying that the Coliseum isn’t a fun place to watch the game, but it’s not a good fit for NFL football. Architects build today’s stadiums to bring fans closer to the game. The Coliseum’s seating, even with the renovations, cannot match what venues like Heinz Field and Cowboys Stadium offer.

The problems with the stadium make it easier for Kroenke to give away one of the Rams’ home games. There is no better time for the Rams to build their brand than now. Quarterback Jared Goff, defensive tackle Aaron Donald, and Gurley form the nucleus of a an exciting team that’s on the rise. Taking them on the road to London, Mexico City or anywhere else makes sense when trying to build a brand around the world. Once this team moves into Inglewood, the opportunity will go away to a degree. The time is now for the Rams to get some guaranteed time in a new market.

There are a couple things to make clear here. I’m not saying this is beneficial to the Rams fanbase in Los Angeles. The team is taking a home game away from L.A. fans for the third straight season. The NFL loaded the 2018 home schedule with tough opponents across the board, which will draw more people to the Coliseum. It’s important to build your brand in a region that also houses nine other major professional teams and two high profile universities. That’s not to mention competition from other sources of entertainment in the region, including Universal Studios, Disneyland, etc.

In the end, the Rams are likely thinking that the immediate sacrifice will be worth it down the line. Kroenke’s team is a couple of years away from playing in a state-of-the-art venue with all of the bells and whistles. Once the Rams take the field there, it’s doubtful that they ever host a home game away from L.A. again. It’s the journey there that’s annoying, but maybe it’ll be worth it to see the Rams become a worldwide brand.