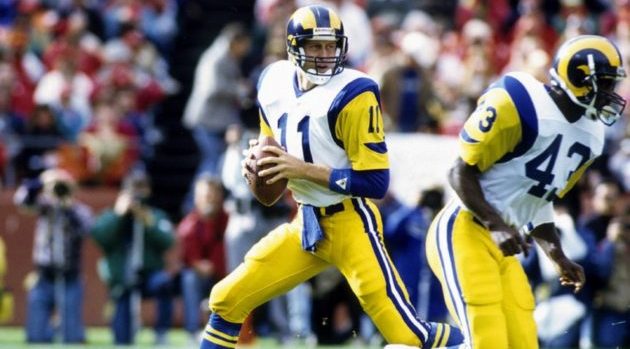 By the time the early 1990s rolled around, it was evident that Los Angeles Rams owner Georgia Frontiere wanted out of Los Angeles. Each year leading up to the move meant the excitement died down. However, there were a few games worth mentioning as a part of the greatest games during that small era:

There wasn’t a whole lot of impact players for the Rams from 1990-1994. If you can remember one impact player during that era, more than likely you would name “The Bus” Jerome Bettis. One of his most memorable games in his short stint with the Rams was against the Saints. The Saints were fighting for a playoff spot, but Bettis left their defense beaten and battered as he rushed 212 yards and one touchdown. It turned out that the Rams needed every single one of those yards as they barely squeaked away with a 23-20 victory.

Although the fans and the personnel didn’t know it at the time, this game against the Broncos would be their final victory in Los Angeles. This also means that the Rams would go on to lose the remaining seven games before moving to St. Louis. While the Broncos were having a down year, they were still a formidable opponent.

It’s hard to believe, but the Rams built a 21-point lead in this contest against the Broncos. All of that changed in the fourth quarter when Mr. Comeback, John Elway arranged yet another two-minute drill. Elway brought the game within six points after finding wide receiver Derek Russell in the end zone making the score 27-21. Remarkably, Elway had one last possession deep in their own territory. Elway targeted TE Shannon Sharpe, but his pass fell incomplete. The Rams survived an Elway comeback.

The 49ers had a nice winning streak going beginning in the 1989 season. They had 15 straight victories and seemingly had another victory to add with the Rams coming to town. However, this game turned out to be one of those games where nothing went right for the undefeated 49ers.

Offensively, QB Joe Montana was picked off three times and was limited to 235 passing yards. Running back Roger Craig rushed for a miniscule 44 yards and did not reach the end zone. Defensively, the 49ers allowed wide receiver Willie “Flipper” Anderson to snag 149 receiving yards and Cleveland Gary cleaned up by scoring two touchdowns. The end results after shutting out the 49ers in the fourth quarter was a 28-17 Rams victory. It’s always nice to score a win over a division rival, but snapping a 15-game winning is that much sweeter.

The Rams were also responsible for snapping another streak during the early 1990s. The soon-to-be Super Bowl champion Cowboys were a juggernaut in 1992, especially at home. In fact, there were undefeated at Texas Stadium that season until the Rams came into town. The Rams didn’t exactly strike fear into their opponents during the 1992 season, but the Cowboys underestimated them.

Running back Cleveland Gary dominated on the ground by rushing for 110 yards and one touchdown. QB Jim Everett had a decent game too, passing for 251 yards and two touchdowns. It was still a closely contested game, but the Rams barely secured the 27-23 victory on a pair of Tony Zendejas field goals.

This game was certainly one of the Rams’ most impressive victories in this era because of the remarkable comeback they had against the Buccaneers. Just how much did they overcome? Picture this, the Rams are on the road going into halftime trailing 27-3. Most people had given hope at that point, but not the Rams. The fans that stood with the team witnessed one of the greatest comebacks in franchise history, beginning with a 40-yard bomb by Jim Everett t0 Flipper Anderson. Everett would also find WR Jeff Chadwick and TE Pat Carter to seal the game, 31-27. The Rams scored 28 unanswered points in the second half in order to earn the victory.