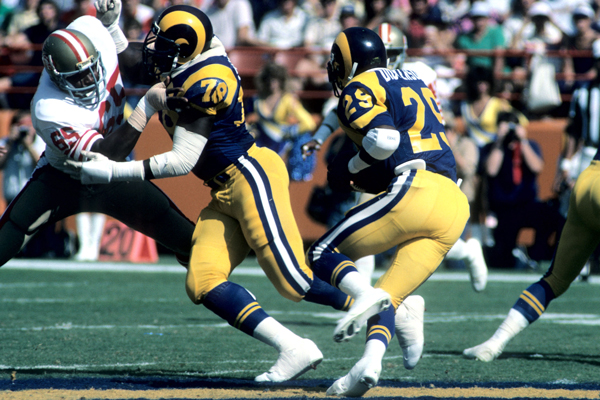 Only eight players in NFL history have played in the NFL for 20 or more seasons. Only two of them spent all of those seasons with one team. One of those men is Jackie Slater, the Hall of Fame offensive tackle who donned blue and gold for the Rams in two different cities and three different decades.

Slater was drafted in the third round of the 1976 NFL Draft by the Los Angeles Rams. He only started one game during his first three seasons before earning the starting job in 1979, a job he would hold for 16 years. In his first season as a starter, the Rams offense flourished, and Slater helped the team reach Super Bowl XIV.

Slater enjoyed the most successful stretch of his career when the team drafted Eric Dickerson second overall in 1983. He was selected to his first Pro Bowl after helping Dickerson break the single season rookie rushing record. Over the course of the decade, Slater established himself as one of the premier tackles in the league. He was selected to seven Pro Bowls and five All-Pro teams.

While Dickerson was the jumpstart Slater’s career needed, it wasn’t the only thing that made his career. Slater was selected as a first team All-Pro in three consecutive seasons following Dickerson’s departure. He helped journeyman Charles White rush for over 1,000 yards and garner an All-Pro selection for the only time in his career. He also helped turn players like Greg Bell and Cleveland Gary into 1,000-yard rushers.

Slater’s career came to an end in 1995. Although he joined the team on their move to St. Louis, he only played in one game that season due to injury. He was the only player from the 1979 Super Bowl squad to play for the St. Louis Rams, and earned the Bart Starr Man of the Year Award during his final season.

Jackie Slater is remembered for his consistency and durability during the course of his legendary career. He fought through injuries and always provided stellar play when he was on the field. Rams running backs were able to feel comfortable running behind him for 20 years. Greatness runs in the Slater family, as his son Matthew is a five-time Pro Bowler as a special teamer on the New England Patriots. Matthew Slater is one of just six players drafted to be the son of a Hall of Famer.

Slater was enshrined into the Pro Football Hall of Fame in 2001. No Ram will ever wear Slater’s number 78 jersey again.