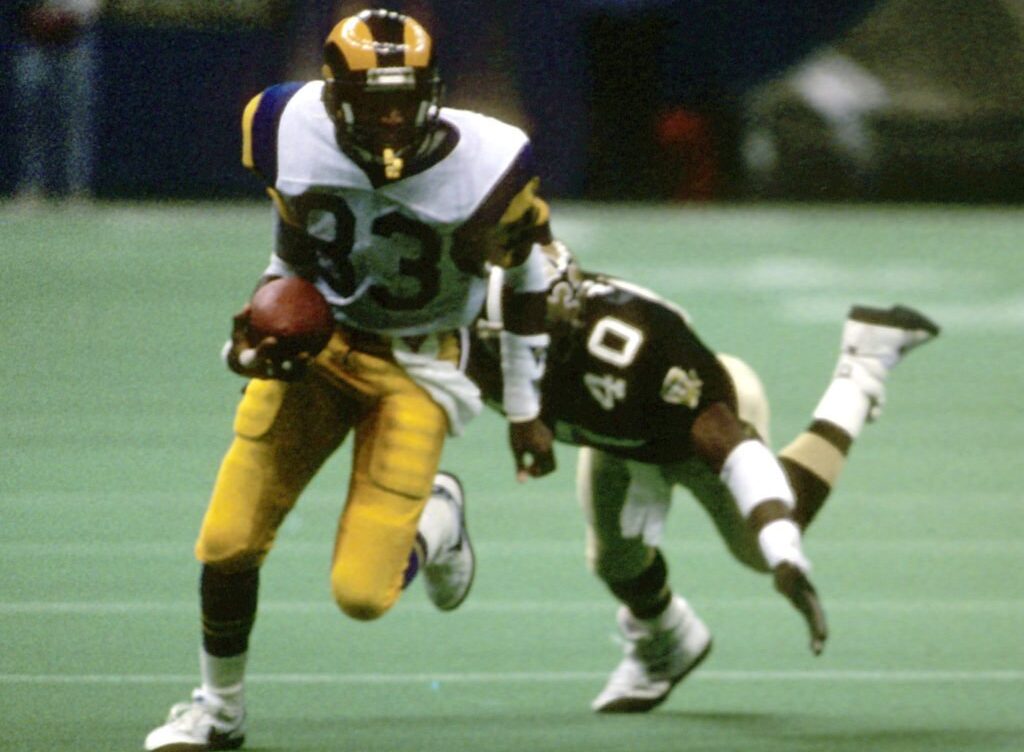 Much like the 1972 Miami Dolphins celebrating each year after the last unbeaten team in the NFL falls, ex-Rams wide receiver Willie “Flipper” Anderson is resting easier this week after Kansas City’s Tyreek Hill encroached his 31-year-old record. Hill completed a masterful 13-catch, 269-yard and three touchdown performance against the Tampa Bay Buccaneers.

On November 26, 1989 the Los Angeles Rams visited NFC West rival New Orleans Saints with legendary Rams receiver Henry Ellard on the shelf due to a pulled leg muscle. Enter second-year pro Anderson who averaged 29 yards per catch in his rookie season, and had caught 19 passes and averaged 30 yards per catch through 11 games during the 1989 season.

Anderson continues to hold on to the record, but he has not quite reached the 40-year receiving yardage record held by the Rams’ Jim Benton who had 303 yards in 1950 before it was broken by Chiefs’ receiver Stephone Paige’s 309-yard game in 1985 against the San Diego Chargers.

When looking closely at Hill’s and Anderson’s games, they were in direct contrast of each other. One was flashy and instantaneous, while the other was workman-like and less productive in terms of scoring.

Hill caught seven passes for 203 yards in the first quarter alone, including 75 and 44-yard touchdowns. He finished with six more catches for 63 yards and another TD. Meanwhile, Anderson found himself playing in a game where the Saints defense was dominating the game and the Rams were forced to score 14 points in the fourth quarter to induce overtime and an eventual win.

Anderson’s only score came with 1:06 remaining in regulation and his longest catch went for 50 yards. Time and time again, quarterback Jim Everett went to Flipper’s pond and Anderson answered the call. But Anderson wasn’t perfect either, he bobbled a pass out of bounds, which would have meant 17 more yards, and he was tripped up on a pass play that would have net him at least another 20-yards after the catch, so the record would have been even more incredible than it already was. But, Anderson still finished with an impressive 15-catch, 336-yard and one touchdown performance.

Lest we forget, there have been many great receivers who have played the game, and 20 have had at least 260 yards in a game. Hill ranks 14th on that list, but Calvin Johnson’s 329 yards for Detroit sits in second, and remains the largest scare to Anderson’s reign.

The old adage is: “Records are made to be broken,” but in Anderson’s case he would like to see another 31 years pass before it goes away for good. His record is safe at least for another week.