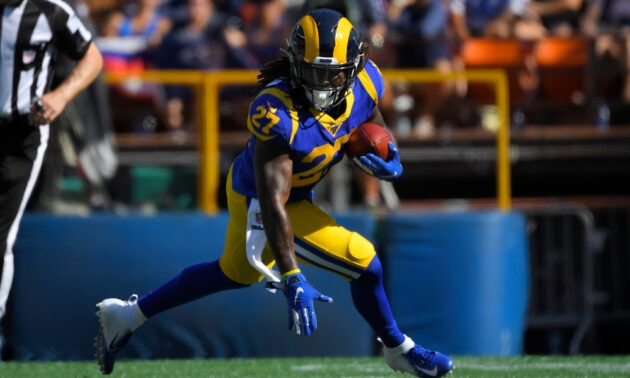 Looking at the Los Angeles Rams depth chart for running backs, this is one position that is pretty much set. Depending on how many running backs the Rams decide to carry may determine the fate of some of the younger undrafted free agents. That said, a fourth running back may be necessary in 2020 than in previous seasons.

About the only thing certain moving forward is that the Rams will be using a running back-by-committee system. Beyond that is all speculation in regard to starter or usage.

While no starter has officially been named, it’s hard to imagine not naming Henderson by default. He was drafted in the 2019 NFL Draft with the hope of taking some of Todd Gurley’s carries away. That didn’t exactly happen in 2019. In truth, the ground game as a whole wasn’t all that effective last season.

That said, with a few adjustments, the Rams appear to be prepared to run the ball much more in 2020. In many ways, Henderson may thrive more in a running back-by-committee system since he’s a great explosive runner. Add in the fact that his elusiveness is one of his most desired traits, and he can be a dangerous weapon.

There is plenty for Henderson to work on from the small sample-size we witnessed in 2019. Being able to catch the ball in the backfield isn’t really a necessity considering the committee. However, being a target for Jared Goff could benefit the offense tremendously.

There’s a lot to be excited about Akers. He’s fast, strong and elusive. He blocks well, a great receiver in the backfield and has a history of playing on terrible offensive lines. That’s a lot to like in a rookie.

The key word there is “rookie.” Everything mentioned above is Akers’s achievements on the collegiate level. Obviously, there will be a learning curve for the NFL level. The question becomes, how quickly can Akers adapt?

It’s undeniable that Akers possesses talent, but it’s better to go into the 2020 season remembering that he is a rookie and will need time to develop. This is ultimately why the committee makes perfect sense because there is plenty of youth on the depth chart.

The sole experienced veteran on the roster is Brown. He didn’t have as much of an impact in 2019 as he did in 2018. But again, the same could be said about the entire ground game. He battled nagging injuries throughout last season too.

If healthy, we can expect Brown to be used in short-yardage situations and potentially at the goal line. One underrated aspect of Brown’s game is his pass-catching too. So, while the focus may be on Henderson and Akers, don’t think Brown will be forgotten.

Kelly is a bit of a mystery. He has been a preseason warrior in the past, but hasn’t contributed much of anything during the regular season. Kelly only had three carries in 2019 and spent the majority of the time bouncing on-and-off the practice squad.

Depending on how many running backs the Rams opt to carry on the roster, Kelly could provide sufficient depth. It wouldn’t be a huge surprise to see the Rams run with four RBs on the active roster since they are going by committee. Even if the Rams only carry three on the active roster, they will most likely carry at least one RB on the practice squad. So if injuries do occur, Kelly can be ready.

All that said, Kelly isn’t guaranteed even a practice squad spot. While there isn’t much competition at the position, the Rams did sign a few undrafted free agents to compete with Kelly for spot on the team.

As mentioned above, Kelly’s spot isn’t secured. It will be tough though for KSU’s James Gilbert and SMU’s Xavier Jones to overthrow Kelly. The Rams could theoretically keep four RBs on the active roster and keep at least one of them on the practice squad. In order to achieve this, Gilbert or Jones will need to show plenty of promise.

They both don’t necessarily need to prove themselves as just running backs. If they become reliable in special teams, the Rams could make room for them on the roster.

We can expect a dramatic turnaround for the ground game in terms of usage. Removing Gurley was more than just about a contract. It was obvious that Sean McVay wasn’t comfortable using Gurley too often.

In 2020, McVay has a slightly new arsenal of running backs to use with a variety of skillsets. Expect the ground game to be heavily utilized and even used more in the passing game. Having new offensive coordinator Kevin O’Connell added is to make sure there is a balance in the Rams’ offensive scheme.