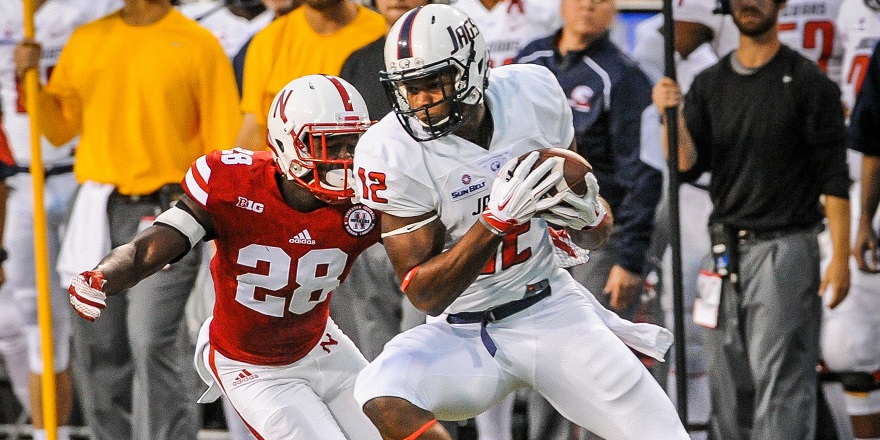 The Los Angeles Rams made South Alabama TE Gerald Everett the 44th overall pick of this year’s draft. The Rams decided to add a unique weapon to Jared Goff’s arsenal when they brought the athletic Everett to the fold. He has a ton of potential, but is by no means a perfect prospect. Here are five major takeaways on Gerald Everett and the Rams decision to pick him:

Freak Athleticism: Everett led all FBS tight ends in forced miss tackles in back to back seasons while at South Alabama. He’s got the strength to drag defensive backs  for extra yards and the agility to break a linebacker’s ankles in the open field. He has the physical tools to be a nightmare matchup for opposing defenses if the rest of his game can translate to the next level. It’s a rare type of player that can be a mismatch for just about everybody in the secondary.

Stretching the Field: Everett shouldn’t – and likely won’t – simply be used as a traditional tight end. Head coach Sean McVay used TE Jordan Reed in the slot a large amount while coaching in Washington. It’s easy to think this is why he fell in love with Everett. He’s got the athletic ability to be a playmaker off the line as well as out of the slot. As mentioned above, he won’t be an easy matchup for any player on the other side of the ball. Rolling out Everett with Tavon Austin in a four wide slot situation could be a frightening sight for opposing defenses.

Lack of Experience: Everett’s path to the NFL is eerily similar to Brian Quick’s. Both were standout basketball players in high school that didn’t even touch the gridiron until senior year. Both went to small colleges, only Quick went straight to Appalachian State while Everett played two years of JUCO and a year at UAB before ending up at South Alabama. Like Quick, Everett is a guy that has only played football for a few years and didn’t exactly play against elite talent while in college. Prospects like Everett have become great players in the league. But as we’ve seen first hand with Brian Quick, it doesn’t always work out as you’d hope.

Limited Blocking: Everett isn’t a bad blocker, but he just doesn’t seem like he has much room to grow in that regard. He struggles to find his assignment at times, but if he finds it he doesn’t let up until the whistle blows. He’s also not that big for the position, standing 6’3 and coming in underweight at 228 pounds during the Senior Bowl. Not exactly a frightening sight for opposing defensive lineman. Everett’s blocking ability isn’t bad enough to keep him off the field, but it’s not good enough to justify keeping him on the field in serious running situations.

Serious Potential: But that’s still what it is – potential. The positives of Everett as a prospect far outweigh the negatives. He’s got transcendent tools for his position and if he pans out, it’s easy to see him becoming another Jordan Reed. The only problem with Everett is that he’s raw and a bit untested. Even though his big game experience is few and far between, there is a ton to be positive about. He caught eight passes for 95 yards and a game-winning touchdown in an upset against Mississippi State last season. He scored a 79-yard touchdown in another upset win against San Diego State. When given the opportunity to shine against bigger schools last season Everett delivered. Can he do this 16 times a year against the best athletes in the world? It remains to be seen. But if I’m Les Snead and Sean McVay, this is a bet I’d be willing to gamble on.