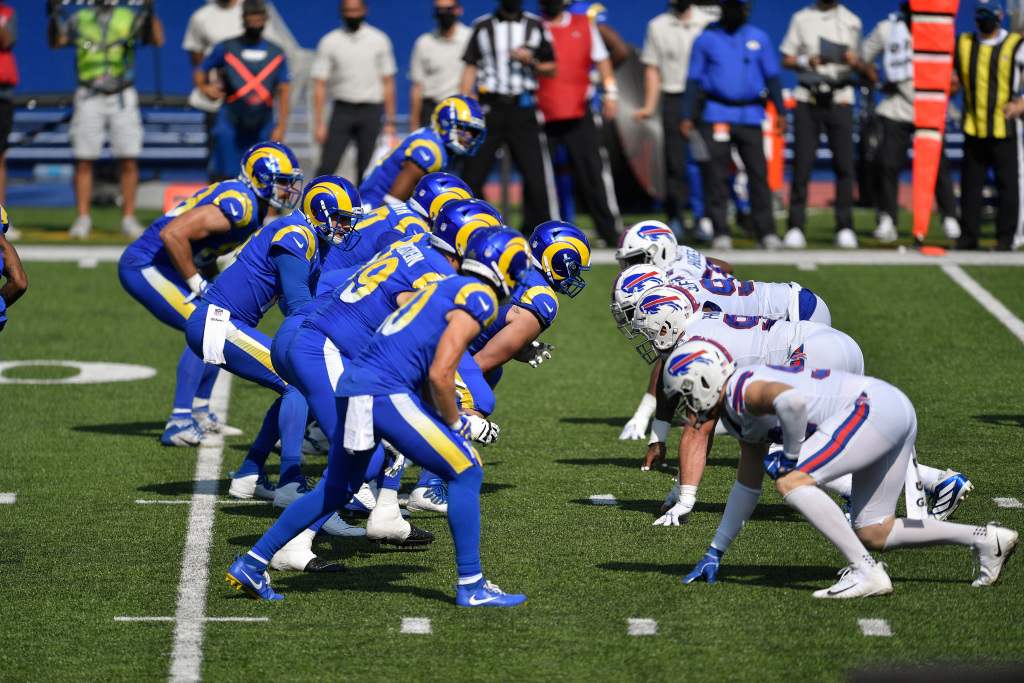 Facing a 25-point deficit with eight minutes left in the third quarter, I had begun writing my game observations in my head and it wasn’t going to be pleasant reading, not by a long shot. However, one questionable call begat a game-deciding questionable call with 25 seconds left to play. The Los Angeles Rams (2-1) lost their first game of the season, twice during the game against the Buffalo Bills (3-0). But interestingly enough, they may be a better team for it in the long run.

Never been one to believe in West Coast teams that are playing back-to-back games in the east returning to the left coast before the second game. The Rams did this week, and it appeared their time clocks were off in the first half with a 10 a.m. PT start for the game.

The Rams brought no energy to the first half. They couldn’t find their playmakers until halftime, and it seemed the only person ready to play was RB Darrell Henderson. When you play a team that is favored to break New England’s 11-year reign in the AFC East, teams can’t come in a step-and-a-half slower than usual and expect to win.

Who would have imagined that the early loss of S Jordan Fuller, rookie in his third game, to injury would cause a mass communication issue in the defensive backfield during the first half? On one play alone Darius Williams, Taylor Rapp and Troy Hill all missed a tackle on RB Devin Singletary.

Leonard Floyd needed to step up his play in this game. Pressure from the outside would have nullified the Bills ability to stop Aaron Donald. The inaction of Floyd determined the defensive line’s ability during the opening half.

The defensive scheme coming in was not a strength for the Rams. They were playing off and soft on the receivers, and with no pass rushing ability it allowed Bills QB Josh Allen the time for his receivers to find a seam, while the extremely mobile QB was able to do as he wanted from the pistol formation and his run-pass option plays. The Rams needed to tighten their coverages and make the Bills run the ball.

Jared Goff started off well, with five-straight complete passes, directing the offense with Henderson as his lead back. When the Rams saw Sam Sloman’s 53-yard field goal attempt just turn left at the goal posts, what it did in actuality was “turnover” the ball to the Bills in great field position. True to a great team, they scored off of that turnover.

Goff’s second turnover of the season also led to Bills points. On a third-and-10 play, Goff tried to get too greedy and the ball was intercepted. Cooper Kupp seemed to be the only receiver with his game legs on from the start, and he did what he could.

Gone were the targets to Tyler Higbee and Robert Woods, the jet sweeps, and Goff sliding out of the pocket to buy time. It’s no wonder the team was down 21-3 at the half!

The Rams got the ball first in the second half, they drove the ball with the infusion of offensive plays described earlier. Woods, Higbee, Kupp and Henderson (12 carries 68 yards in first half) all began to produce. With Henderson over 100 yards for the game early in the third quarter, there were signs of the team’s play-action offense coming to life. Though they stalled on the first drive after failing on a fourth and four call, they turned the ball over again, on downs, to the Bills, who again scored another touchdown to take a 28-3 lead.

An Allen disputed interception by John Johnson III, gave the Rams life. It woke up the defense, ignited the offense, and simultaneously deflated the Bills team as a whole.

The Rams out gained the Bills in the third quarter 183-64.

By the time the fourth quarter started the Rams had cut the deficit to 28-17 behind a Goff TD run, and a nifty catch-and-run by Woods for a 25-yard touchdown. Kupp and Goff connected for a 16-yard TD and Higbee’s two-pointer brought the team back to within three for the lead.

All the while, the defense began to pressure Allen on almost every play. Floyd got the first sack of the game, followed by a Donald sack and some tackles for lost yardage. Donald had two sacks total and a forced fumble that he recovered.

Henderson’s effort on the day paid off for the Rams with 4:30 left in the game, as he scored the go-ahead TD from the one-yard line. With the Rams up by four, the Bills needed a TD to win.

Bills receive a debatable call too

Perhaps it should have never come to this, but the pass interference call on Williams at the three-yard line was a form of payback for the Johnson interception in the third quarter. It was a “what goes around, comes around” type of call. This play shouldn’t have never even been needed, as Allen faced a third and 22 play earlier in the game-winning drive and converted it on a pass play to Cole Beasley.

Tyler Kroft pulled in the game-winning TD off of the Micah Kiser coverage, his second of the day.

No matter how you decide to look at this game, I see it as a heartfelt loss, where the Rams certainly could of rolled over after it looked like they already had. Instead they found their energy, offense, defense and restored their “never over” attitude that it takes to win in the NFL. L.A. showed resilience, which may help them as they try to get to 4-1 before division play begins at San Francisco in Week 6.

Catch my observations next week as the Rams take on the New York Giants in Los Angeles.