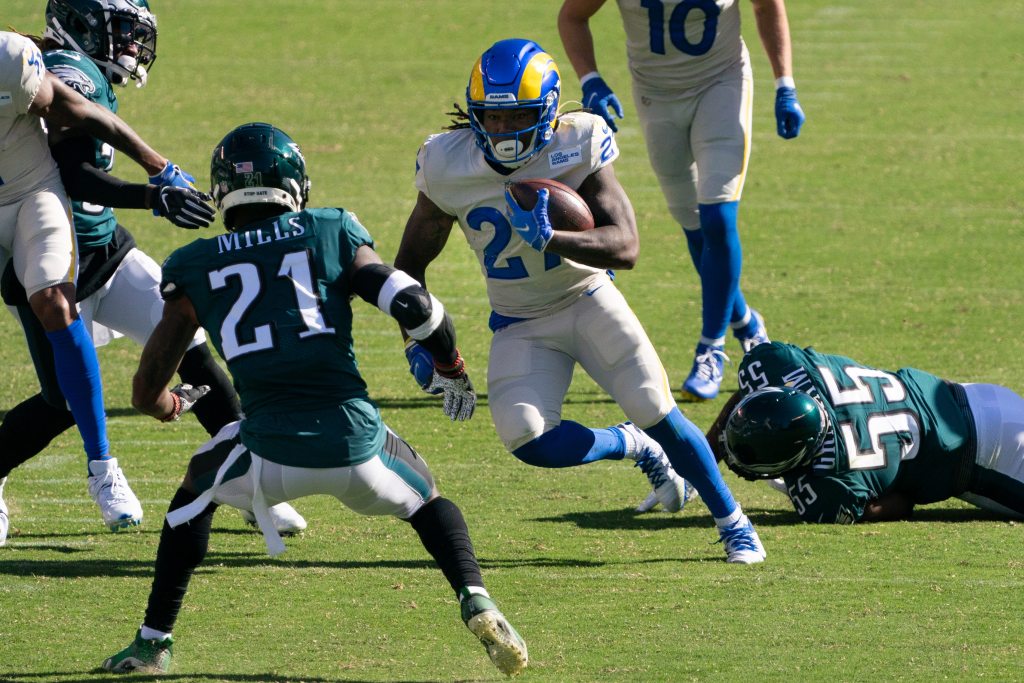 Coming into Sunday’s game, Carson Wentz’s Philadelphia Eagles have beaten Jared Goff and the Rams twice in two games (2017, 2018) since being drafted No. 1 and 2 overall in the 2016 NFL Draft. Blast back into the past and remember this about that draft, many people said Wentz was the more NFL-ready quarterback in the short term, and Goff would be the long-term quarterback of the future. The Rams, of course went long-term with the first pick.

The Los Angeles Rams beat the Eagles 37-19 behind the mistake-less arm of Goff, a running game and scheme that seems like it may work after all. Finally, the Rams defense also held it’s second opponent to under 28 points in a game (my preferred goal for 2020). The Rams went above the goal by keeping opponents under 20 points on the season so far.

Looking for fifth-year growth and leadership from the much maligned QB, Goff opened the game with 12 consecutive completed passes, leading the team to a 21-3 lead, with two TD passes and 145 yards. This game gave fans the perfect chance to see if Wentz or Goff was the right choice in 2016. Based on playoff games, a less than super Super Bowl appearance, this win and production, Goff appears to have been the right man for the right team.

This game was hard to come up with a lead topic as there were several options. Next was Tyler Higbee, who L.A. fans caught a late glimpse of in 2019. There were signs he could be in the mold of the 49ers’ George Kittle. Well, those signs are now correct. Higbee caught his first three TDs of the season in this game and none was more impressive than his third quarter grab.

Mind you, Higbee doesn’t have wide receiver speed, but he was at least seven yards ahead of the Eagle defender and Goff threw the perfect pass hitting him for their third and final touchdown of the day.

The Rams running game has become an important cog for the team. The passing game has fed off of the runs easily during these first two games. Whether it is keeping a back fresh or playing off an injury, the rotation Head Coach Sean McVay has going has paid dividends. After Cam Akers went out with a rib injury, Malcolm Brown was next up, then oh yeah, there was Robert Woods and Cooper Kupp slashing around the ends for 38 yards on five carries. The fourth quarter belonged to Darrell Henderson, who finished the game with 81 yards and a TD, including a brilliant 40-yard slash off left tackle, Andrew Whitworth.

The running game produced 191 yards of the Rams’ 449 yards of total offense. Consistent production like this will help the Rams win a lot of games, as long as the defense plays better than what it did Sunday.

In a Week 1 loss, Philadelphia failed to protect Wentz to the tune of eight sacks. Sunday Aaron Donald and company hardly made a dent in the Eagles passing game. Due to the three-step drop back Wentz used, and the triple teams sent at Donald, the Rams did not have the time to reach Wentz and finished with zero sacks for the game.

What was more perplexing about the defense was the lack of aggressiveness underneath the zones, and the softness of the coverages allowing Wentz to throw the ball around the park at will, or so it seemed. Not being privileged to know the game plan, it didn’t look good and wasn’t too fun to watch, but the team did hold the Eagles below the 28-point threshold, and did grab two interceptions, one in the end zone and a forced/recovered a fumble.

The win is the most important thing right? The Rams are now 2-0 on the season, but played a team that just isn’t good right now. That all changes Sunday, the Buffalo Bills are on a different level than Dallas or Philly.
Stay tuned and see you next week.