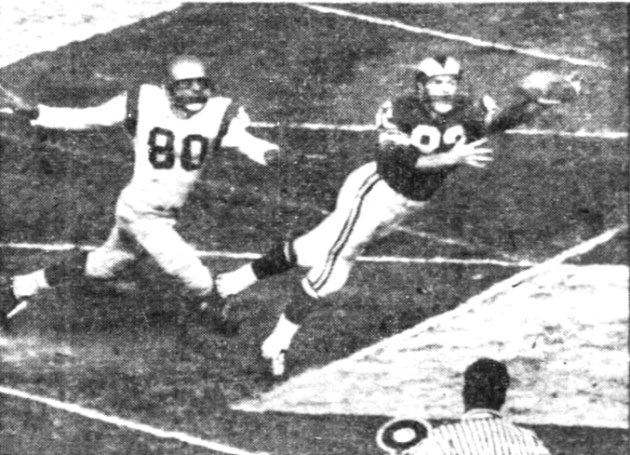 When the late 50s needed a star on the Los Angeles Rams football team, the team looked to the state of Alabama for help. Probably the worst decade in Rams history, the franchise could not seem to fight its way out of a tackle, or of itself. But in the doldrums of this historic era, there were rays of sunshine. James Jackson “Red” Phillips became that ray of hope in an otherwise down time for the local favorites.

Phillips came to the Rams via the NFL Draft, the fifth player selected in the 1958 NFL Draft from Auburn University, where he starred as a wide out and was named to 11 All-American teams his senior year, and included the 1957 National Championship for the Tigers. Back in those days, an All-American was chosen as one of 11 members on the offensive team. Think about that for a moment, 200-plus schools and Red Phillips is a No. 1 receiver in all of America.

Broadly speaking Phillips played seven years for Los Angeles, becoming a three-time Pro Bowler from 1960-1962. He was first-team selection in 1961, he led the NFL with 78 receptions that year. While a member of the Rams, the team only won five games twice and they were especially inept within their division.

Games involving the Eastern Conference, and the fledgling Vikings, the record was a very poor 3-9-1, yet this is only slightly better than their record against their five long-time rivals: Green Bay, Detroit, Chicago, Baltimore, and San Francisco. The Rams record in the 39 games played against these teams since October 25th, 1959 was six wins, 32 losses, and a tie.

Pathetic. Simply pathetic. But because the team had a sure-handed receiver in Phillips, his play was able to overcome the team’s inabilities to earn him some prestigious honors.

When you look at the games of the 50s and 60s, 100-yard receiving and rushing games came few and far between for the Rams. L.A. fans had something to cheer about in Phillips as he came to play. Of his best games in a Los Angeles uniform, a 1961 contest against the Norm Van Brocklin coached Vikings, he had 219 total yards catching nine passes for 163 yards and no TDs, in a 31-17 win. For his career, Phillips has 333 catches, 4,953 yards and a 14.9 average per catch.

After his playing career, the venerable wide out accepted a coaching job with the Atlanta Falcons. He also coached with the San Diego Chargers, New Orleans Saints and with Florida State before leaving the game and moving into the insurance field as a private citizen.

Red Phillips passed away on March 25, 2015 and part of his obituary read like this: “Jimmy ‘Red’ Phillips is one of the all-time great football players at Auburn and instrumental in helping our program to a National Championship in 1957,” said Auburn athletic director Jay Jacobs in a university release. “He was not only a great football player, but a great man. We are saddened by Jimmy’s passing and will continue to keep him and his family in our thoughts and prayers.”